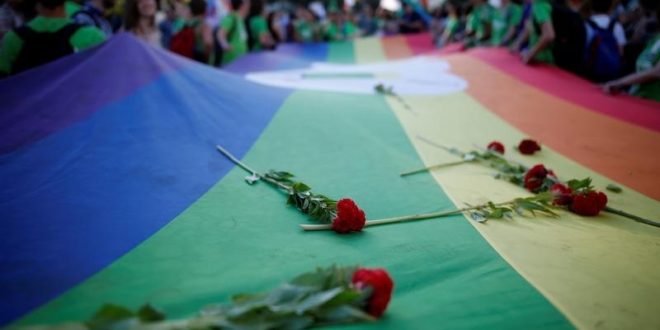 There she is, the first openly gay Miss America contestant

Erin O’Flaherty, 23, represents the Midwestern state of Missouri, where she was crowned the first openly gay Miss Missouri in June.

“I certainly hope my presence will help people open up a little bit more. I’m very open about it,” she told local media at the time.

“It’s never going to be something I try to hide because I’m very proud to be a member of the LGBT community,” she told the St. Louis-based Riverfront Times.

O’Flaherty, who owns a clothing store, said she represents a platform of suicide prevention. Contestants select as platforms causes that they aim to raise awareness of or promote.

She is slated to sing in the contest’s talent competition.

“Through every major milestone of our nation’s evolution, Miss America has provided a voice for women from all walks of life, and this year, we welcome our first openly gay contestant,” said Josh Randle, chief operating officer of the Miss America Organization, in a statement.

“Miss America contestants continue to be the best and brightest in the country, and we proudly support each and every young woman who competes in our national program,” he said.

The annual event, first held in 1921, will be held on Sept. 11 in the beachfront town of Atlantic City, New Jersey. Its longtime theme song, “There She Is”, has become known around the world.

View All Posts
Previous Donating blood: Mysterious and sacred
Next Ask An Atheist: Did people from sacred texts really exist?

Founded by ex-Scientologists turned Satanists, the Foundation Faith of God and its members awaited the end of the world but when it didn't come, the group decided to rescue animals instead.