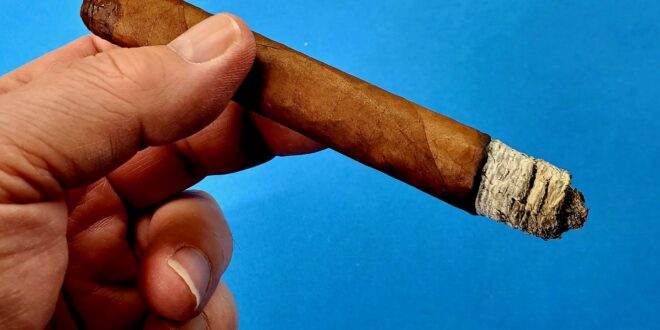 My season has finally arrived.

In my world there are two seasons – winter and cigar season.

I know some of you are saying “that’s disgusting.” You might find my dear Carla agreeing with you.

She allows me two cigars a week, but only when the weather is warm enough to smoke on our porch. Back in my youth, I could manage in colder weather with a good heater and lots of blankets. But I stopped doing that years ago. Now I need at least 60 degrees, which means my smoking season lasts roughly mid-May to early October.

I understand smoking of all sorts is a filthy habit. It is a vice. But cigar smoking is my vice and has been since my early 20s.

My college roommate and I had gone to Seattle to cover a joint meeting of the Oregon and Washington state boards of higher education. We happened to meet a reporter for the Eugene Register-Guard, the paper I would eventually join.

Lloyd – my future boss – took us to dinner that night explaining that all young reporters should learn how to enjoy a company expense account. He paid for dinner, though I always suspected out of his own pocket. After dinner Les and I lit up a cigar. I don’t remember if Lloyd joined us.

Actually, I grew up with cigar smoking. My grandfather, who I loved dearly, smoked Dutch Masters with plastic tips. Now those are terrible cigars, but they were his brand. The smell of cigar smoke always reminded me of him, still does even decades after his passing.

My parents smoked cigarettes until about 1960, then both quit cold turkey. I tried cigarettes in college. Yech! I could not inhale without choking and gasping, which made me look decidedly uncool.

So, I took up a pipe, which seemed somehow more academic and more sophisticated. But pipes are messy and need cleaning and – well, I looked kind of silly.

That first cigar in Seattle was a different experience. Only the boldest and most reckless of cigar smokers will inhale. A cigar veteran will roll the smoke around the mouth to enjoy the flavor, and then exhale. I enjoyed that experience from the start.

In those days, people smoked in public, just about everywhere. They even smoked in the workplace. Our newsroom in Eugene was bathed in a constant blue cloud. At the end of the day the tin film canisters that served as ashtrays would be overflowing with butts. When they did a newsroom remodel, work crews had to scrape yellow grunge from the walls before painting.

I did not smoke in my newsrooms back then. But in Wichita, my boss and I would move to the smoking porch once or twice a day, he with his cigarettes and me with a good cigar. We did some good brainstorming on that porch.

In Colorado Springs, a few of my colleagues and I would go to a local cigar bar after work. Sharing a fine cigar and good Scotch with friends is a most convivial way to spend an evening.

Of course, those days are long past. There are only a few cigar bars left in the Northwest, all grand-fathered in as anti-smoking laws took effect. Locally, there is a fine cigar bar in the Northern Quest casino, but not much else.

Anti-smoking laws have even changed the cigar experience in Europe. My friend and I used to enjoy fine cigars and drinks in London or Amsterdam jazz clubs. Jazz and cigars go together. But no more. Last time I was in Europe, clubs were smoke free everywhere.

I know that no smoking rules are best for public health, and I support such laws. But it has limited my smoking to our porch.

Most of us have our favorite brands. In the spring, when I am just starting again, I prefer a mild smoke, a Macanudo Cafe or Montecristo White. By the end of summer, I will have moved to stronger brands, Partagas or the red dot Cohiba.

There was a time when I did almost anything to get my hands on Cuban cigars. On one occasion a group of Irish journalists came to visit the newsroom in Colorado Springs. As a gift, they brought me a box of Cuban Cohiba robustos, a holy grail smoke at the time. They lasted a long time.

But the desperate search for Cubans is over, too. Nicaraguan and Dominican cigars are as good or better and are, of course, legal and less expensive as a rule.

Some of you might remember the big explosion in fine cigar smoking early in the century. Suddenly it was a fad, and everybody was lighting up. I tend to retreat when something I love becomes a fad – cigars and fedoras both became big fads.

But I never stopped smoking, and I still have my fedoras, which just happen to go well with a smoke and a fine Scotch. I knew the hipsters would move on to designer beer, or boutique whiskeys, or luxury beard trimmers that can double for manscaping.

Did I mention that my dear Carla hates my smoking? When I come in from the porch, I must stand still, with my arms outstretched, as she sprays me with Febreze, a product made to cover the smell of wet dogs.

I would be offended except I love her very much. If she wants me to smell of Febreze instead of cigar, I will accommodate her. So, I guess I have two seasons now – winter and Febreze.

Time to go. I have a Montecristo White waiting…on the porch. And Carla is standing inside the door with a spray bottle.