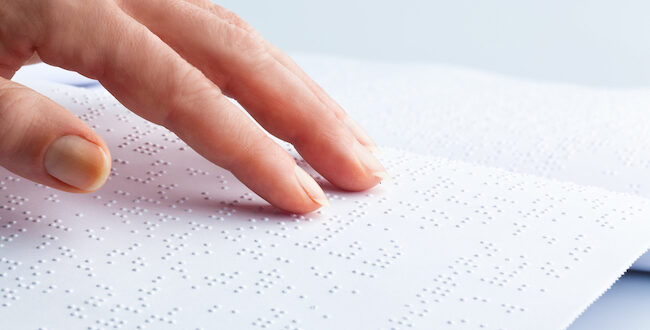 “Alright, I’m heading to class, but I’m going to clean my glasses first because being able to see is sort of necessary,” I said to my roommates as I got ready to go to my online Hebrew class. Hearing the words come out of my own mouth stopped me in my tracks. “Is being able to see really necessary for reading Hebrew?” I wondered. “What resources are there for the blind to study theology?”

As it turns out, Eric J. Harvey is a blind scholar working on this very thing. Some rabbis and scholars began creating a Braille system for Hebrew in the 1930s. Harvey slowly became blind over the course of his PhD work in Near Eastern and Judaic Studies at Brandeis University, and “While Hebrew and Greek have both had Braille codes since the 1930s, several of the other ancient languages he works with did not have an existing Braille code. Thus, in 2017 and 2018 he worked with a small group of other scholars to create a Braille code that could represent the Mesopotamian languages of Sumerian and Akkadian.” Despite a lack of support within formal academic structures, blind scholars from across fields “help each other navigate difficulties” in academia.

John Hull was a “key intellectual figure in theological education and the development of multi-faith thinking” with a similar story to Harvey. He learned in 1980 that he was losing his vision and it could not be saved. While grieving this loss, celebrating the birth of their son, and continuing in his theological work, John and his wife Marylin had to navigate the major changes in their life, finding ways for John to continue his scholarship.

In his audio diaries and the documentary based upon them, Hull recounts a conversation he had with a book publisher: “Well, I’m interested in reading contemporary social sciences. No, look, how do blind people read big books? They said, ‘They don’t.’”Hull did not let this stop him, though. Dozens of students worked for him recording readings of books for him to listen to. He recorded his thoughts on audio tapes and learned to lecture without notes.

Both Harvey’s and Hull’s are stories of determination and overcoming. But they are also stories of white men who were already successfully engaged in higher education when they lost their sight. If it took extensive effort and massive support systems for them to continue in their studies, how much less accessible must such studies be to those situated at the intersections of disability and other disadvantaged groups.

Damon Rose lost his sight at 13 and reflects that his encounters with Christians tend to involve prayers for his healing and “leave [him] feeling judged as faulty and in need of repair.” Stories of Jesus healing people in the gospels lead many Christians to pray for similar healing for people with disabilities today. However, Lyndall Bywater, a blind Christian scholar, explains that “Jesus was operating at a time when being disabled meant being poor, unemployed and excluded from mainstream society.” Jesus did not merely heal physical ailments, but social ills. And excluding people from the fullest possible engagement of theological study and/or church life and blaming it on their disabilities is certainly a social ill. If being able to see is “sort of necessary” in our current schools and churches, then it is our responsibility as people of faith to change that.

Previous Ask A Catholic: No Meat on Friday’s
Next SpokaneFāVS.com Editor Tracy Simmons’ TEDxSpokane Talk on “The Cult Next Door” Now on YouTube