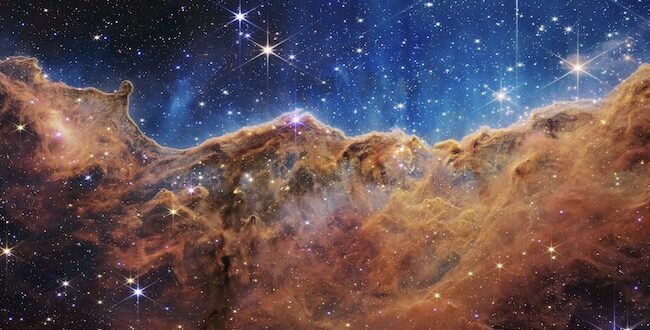 The Carina Nebula is one of the largest and brightest nebulae in the sky, located approximately 7,600 light-years away in the southern constellation Carina. Nebulae are stellar nurseries where stars form. The Carina Nebula is home to many massive stars, several times larger than the sun. Photo by NASA

These days, Christianity is pretty much down with the findings of astronomy, and nowhere more than in the Vatican, where the Rev. Guy Consolmagno, the Jesuit astrophysicist who directs its space observatory, waxed enthusiastic over the images received from NASA’s James Webb Space Telescope last week.

“We’re really excited by the new images from the Webb telescope!” Consolmagno wrote. “The science behind this telescope is our attempt to use our God-given intelligence to understand the logic of the universe.

“But as these images show, the universe is not only logical, it is also beautiful. This is God’s creation being revealed to us, and in it we can see both his astonishing power and his love of beauty.”

Now, for the record, those awe-inspiring images are not photographs showing what you or I could see with our own eyes. The Webb collects light from the infrared part of the electromagnetic spectrum — a part that human beings can’t see at all. The Webb’s images are visualizations created by representing the range of infrared radiation collected by the telescope as if it took place in the small part of the spectrum we can see.

As for what Consolmagno calls the logic of the universe that the science behind those images reveals, there certainly are Christians who don’t accept it. Foremost among them are “young Earth” creationists such as those associated with Answers in Genesis, the fundamentalist Christian apologetics organization that was founded in 1980 as the Creation Science Foundation.

Writing on the Answers website back in January, Rob Webb, a former NASA employee, assailed the telescope that happens to bear his own last name. It has, he wrote, “overall objectives … saturated in evolutionary (and really naturalistic) thinking.”

By this he means that the science behind the Webb is at odds with the young Earth view that, as he puts it: “God created everything in the heavens and the earth within six literal days approximately 6,000 years ago (per the biblical timeline), all for his glory.”

The better our science gets, it seems, the harder the creationists fight. As Ronald Numbers points out in his definitive history of creationism, at the beginning of the 20th century the first creationists did not contest geological time. Devising workarounds for the biblical six days, they concerned themselves with how life on Earth had come about. It is only in our own time that young Earth creationism has become a touchstone of fundamentalist belief.

How widely is this view held? According to the most recent Gallup survey on human origins, as of 2019, 40% of Americans said they believe that God created humans in their present form. Whatever one thinks of such a position, it’s a far cry from the belief that the universe is 6,000 years old.

Whether you accept the science behind the Webb or reject it outright, you’ve got to hand it to NASA. The images are awesome. Who cares if what you’re seeing is the evidence of things unseen?

trincoll.edu/Academics/centers/GreenbergCenter/Pages/default.aspx
Previous Ask A Member of the Church of Jesus Christ of Latter-day Saints: I Hear Satan
Next Gonzaga offers $500 prize to person or organization countering hatred