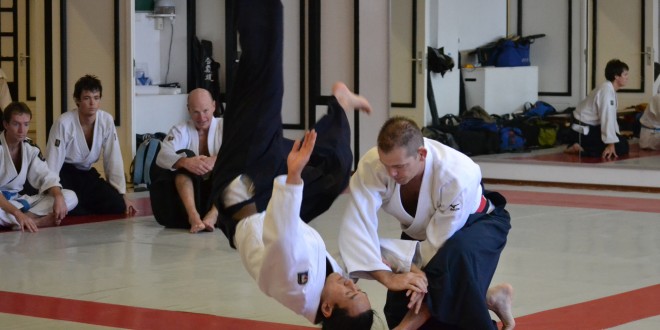 The Walking Dead Takes On Pacifism

What does a goat, a bathrobed, staff wielding psychiatrist, zombie driver’s licenses, cheese, Aikido and PTSD have to do with pacifism? You found out if you watched The Walking Dead’s season 6, episode 4: “Here’s Not Here.”

This episode paralleled a pretty feisty online conversation I am engaged in on my Facebook page that blossomed after I posted this scripture:

“A warrior putting on his sword for battle should not boast like a warrior who has already won.” -1 Kings 20:11

I’ve written extensively on my evolving relationship with nonviolence, pacifism, and ethical realism in a world of chaos over the years. So, this episode offered up some really great moral and ethical conundrums to contemplate, all set in an apocalyptic world drenched in violence, human-eating corpses, and marauding psychopaths!

In this episode, the viewers get to see what and who changed the character Morgan from a violent, gun toting crazy man, killing everything and everyone in his mentally broken world, into a peace loving, staff wielding sensei who now believes “All life is precious.”

I won’t recap the whole episode, other than to say Morgan is saved and delivered back to sanity by Eastman, a vegetarian psychologist trained in Aikido with a very tragic and violent past. Eastman (probably a nod to Eastern philosophy) now lives in a Walden-like cabin in the woods, where he gardens, has a pet goat, tries to learn to make cheese, and hosts a prison cell in his living-room.

Aikido, to clarify, is a Japanese form of self-defense and martial art that uses locks, holds, throws, and the opponent’s own movements to defeat them. The form itself is a representation of a peaceful reduction of conflict; the momentum of the fight comes from the aggressor only to be altered to the advantage of the Aikido practicioner. In the episode, there’s a number of conversations that contrast Eastman’s message of Aikido with the barbaric world of survival the characters in the show are navigating. The message is also a stark contrast to the dark backdrop of the current mayhem taking place in other story lines.

Eastman explains the Aikido philosophy in his brilliant, slow work of rehabilitation with Morgan:

“It’s about redirecting, evading, and actually caring about the welfare of your opponent. So you have to care about yourself. You have to believe that your life is precious, that all life is precious. You have to redirect those thoughts, the history that tells you otherwise. What we’ve done, we’ve done. We evade it by moving forward, with a code to never do it again. To make up for it. To still accept what we were. To accept everyone. To protect everyone. And in doing that, protect yourself. To create peace.”

Then there’s some more wisdom shared through Eastman’s handwritten words, found in “The Art of Peace,” a book he offered Morgan, that said:

“Aikido means not to kill. Although nearly all creeds have a commandment against taking life, most of them justify killing for one reason or another. In Aikido, however, we try to completely avoid killing even the most evil person.”

The beauty of the message and its transforming impact on Eastman and now Morgan is juxtaposed with the devastating impact of their nonviolent choices and the subsequent repercussions on the people of Alexandria (a human safe-zone) . There are no easy answers or paths without unforeseen consequences. People will die, but the central question of this episode provokes a thought: how do we choose to live?

The closing scene reveals that Morgan is telling the whole story to one of the murderous members of the Wolves gang, a group that has recently butchered many of the innocent, peaceful people of Alexandria. The chilling last words of Morgan’s captive and proposed patient set the stage for the challenge of the premise of the episode and possibly the philosophy therein:

I am not sure how it will all turn out, other than the assurances someone will die and be eaten. But I do hope that the profound examination of non-violence taking place will lead to hope and not futility in the episodes to come. I’m also hoping to see a zombie goat, too!

Previous Boycotts have limits but God doesn’t
Next Evangelical pastor to peers: ‘Don’t kill a Muslim’