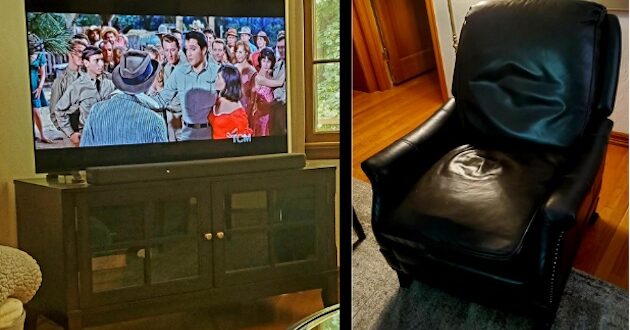 Steve Smith's view from the recliner/SpokaneFāVS

The View From The Recliner

The View From The Recliner

I have sometimes written about the view from my porch, one of my favorite places to watch the world go by on cool autumn days, or better, summer mornings or breezy evenings.

But this last week, I can only write about the view from my living room recliner.

The record setting heat and a series of routine medical appointments have left me housebound. And as much as I like our little South Hill bungalow, it is not where I want to be 24/7 during the summer. I don’t have an unlimited number of summers left.

Worse, to keep things as cool as possible without burning out the air conditioning, we keep all the curtains closed, and windows shut. In windows with western exposures, my dear Carla has added sheets to further lessen the impact of afternoon sun.

Meanwhile our big industrial-grade fans in most living spaces generate noise equivalent to a 747 fleet.

It is all a bit too claustrophobic. We all know about cabin fever in the winter months. This is cabin fever on bright, sunny days.

So, I sit in my recliner and watch the world…well I do not see the world from my recliner.

I do see the living room television, 58 inches of 4K glory and a sound system capable of drowning out the fans.

No, I watch dumb movies and old TV shows.

Mostly the TV is turned to Turner Classic Movies, a cable channel introduced to me by my father. Some films are truly classic. But as my mother once said when she was fed up with my dad’s viewing habits, “some movies were bad then and they are still bad.”

She did not think a movie was a classic just because it was in black and white and made in 1932.

But I watch anyway, most often just keeping the movie in the background while I write or read.

I watch MeTV in the early mornings when I get up and want nothing more than a cup of strong, black coffee.  I don’t believe there is a MeTV program newer than 1980. “Dragnet” at 5:30 and 6 a.m. Classic cartoons at 7 a.m. “Leave it to Beaver” (RIP Tony Dow) and then “Perry Mason.”

If it is too hot to venture out, and if I am not writing, I might switch to Pop TV, where “ER” runs on an endless loop, season after season, over and over, perfect background television. I can bear to watch the Anthony Edwards/George Clooney early seasons. And there is something to be said for the last season with Angela Bassett. But I refuse to bog myself down with the Dr. Lockhart narratives in the middle seasons. That poor woman endured so much.

From my porch, I can watch the world go by. And twice a week I can enjoy a fine cigar in the late afternoon. But in the sort of heat we experienced last week, the world I see go by ended sometime around 1980.

It is all a bit mind bending.

Those old TV shows are a sort of time capsule and when viewed through contemporary values and experiences they can be just little disconcerting.

I enjoyed “Dragnet” in the late 1960s. Watching it while fully stoned provided gleeful entertainment as Joe Friday went crazy connecting marijuana with all sorts of criminal evils. Now, Jack Webb’s Friday simply looks like an unhinged fascist. Even early in the morning, before coffee, he seems too dangerous.

I have written before about the TV world that never existed, the all-white world of “Leave it to b\Beaver,” for example. But watching any old, classic TV show, I find the lack of diversity on screen jarring.

Of course, the “A-Team” on MeTV in the evenings has Mr. T, about as diverse as can be found on classic television, and the only cast member worth watching on that mindless show.

Some classic shows hold up remarkably well. “M*A*S*H” on MeTV, maintained the anti-establishment tone of the original movie, at least in the first few seasons. And because of the liberality of developer Larry Gelbart and star Alan Alda, the show celebrated diversity and argued against racism when such topics were generally avoided on screen.

But sometimes a cabin-bound viewer just needs a good laugh. Late at night, Carol Burnett reruns do the trick. But – and I am really embarrassed to say this – I laugh hardest at “Green Acres,” a show I never watched back in the day. But I refuse to watch “Hogan’s Heroes.” Nazis were not funny when the show first aired, and they are less so now.

It would be a good thing if I could draw some important faith and values insights from this reflection. The fact is, I cannot. There is really nothing deep about TV, then or now. And I include in that condemnation, TV news which really is not news anymore.

The best I can say is old TV can be a relatively harmless diversion for the housebound.

I will curse the winter when it comes. But this last week, I really would have liked to spend time on the porch and watch the real world go by. After all, for all its complications and frustrations, the real world comes to us in living color and stereophonic sound and is really all the entertainment we need.