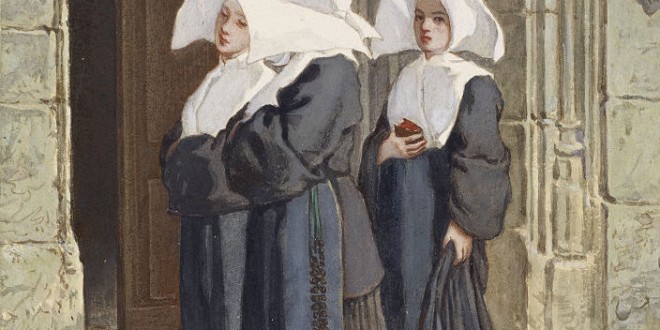 Three Nuns in the Portal of a Church, by Armand Gautier

The Vatican vs. the nuns: 3 takeaways from Tuesday’s report

(RNS) The moment was more “Kumbaya” than “Come to Jesus” on Tuesday (Dec. 16) as the Vatican released the much-anticipated results of an investigation of women’s religious communities in the U.S., the first of two controversial investigations of American nuns by the Roman Curia.

The 5,200-word report was largely positive, and participants at a Vatican news conference were even more effusive in their praise for each other, the process, the outcome and prospects for future collaboration to meet serious challenges. That was a big change from how things started six years ago.

So what did we learn from this whole saga? Here are three takeaways:

“It is not a truce,” Sister Sharon Holland of the Leadership Conference of Women Religious, the main network of U.S. nuns, told reporters in Rome. “We are not at war.”

But it sure looked that way for years, especially under now-retired Pope Benedict XVI, who authorized the two investigations. Other churchmen under that more conservative pontificate also regularly deployed sharp rhetoric against what they saw as feminist impulses among nuns and Catholic women in general, while anything that smacked of “feminist theology” was often targeted for censure.

Are things different under Pope Francis? It certainly seems that way. Francis has privately downplayed these sorts of Vatican investigations, and he is eager to promote dialogue and a more collaborative church focused on mission, not internal bickering.

“Pax Romana” is the term given to a long-ago era of peace imposed by the Roman Empire’s powerful military. This rapprochement between the Roman church and the nuns is the fruit of dialogue — a “Pax Franciscana” as Massimo Faggioli, a church historian at the University of St. Thomas, put it.

2. But the battle continues

As pleased as everyone seemed this week, there is no guarantee that the results of the second, more controversial, investigation will be as conciliatory.

That investigation was effectively a hostile takeover of the LCWR, and it was sprung on the American nuns (and most of the U.S. bishops) in April 2012. In launching the campaign, the Vatican sharply criticized the sisters for their perceived doctrinal laxity and focus on social justice over hot-button sexuality issues.

Catholics in the pews sided strongly with the nuns, but while the visitation that was concluded this week was run by the Vatican department concerned with religious orders — and headed by Cardinal Joao Braz de Aviz, an ally of Francis — the LCWR investigation is being run by the Vatican’s Congregation for the Doctrine of the Faith.

The doctrine office is headed by a conservative German theologian, Cardinal Gerhard Mueller, who was appointed by Benedict. Mueller has openly opposed some of the reforms sought by Francis and he has continued to take a critical stancetoward the LCWR.

Church sources say they expect the LCWR investigation to conclude this year because Francis wants it over and done. While its verdict may be milder than if Benedict were still pope,  it may still contain tougher language than anything heard Tuesday.

Also: Francis has said the church must “work harder to develop a profound theology of the woman” and he has called for a greater presence of women in the Curia and a greater role for the “feminine genius” in the church as a whole. But it remains to be seen what that will mean in reality.

The Vatican churchman who launched the visitation in 2008 was Cardinal Franc Rode, who was later replaced by the more progressive Braz de Aviz.

In a 2009 interview with Vatican Radio, Rode said the investigation was necessary because of fears that a “secularist mentality” and a “feminist spirit” had affected the U.S. nuns.

And the source of those suspicions? “Some criticism arrived from United States and an important representative of the U.S. Church warned me about certain irregularities or deficiencies in the lives of American women religious,” he said, without naming names.

That’s in fact the way the Vatican got its information on American Catholicism, via fellow conservatives who would complain, strongly and frequently, and who found a sympathetic ear in Rome.

Not anymore. Francis goes out of his way to listen to many and varied opinions, and he wants everyone in the church to speak frankly and openly so one point of view does not dominate and give a distorted picture of reality.

Listening to all sides before starting an investigation could shorten the learning curve, and avoid a lot of drama on the way.

“I now understand as never before how enriched and blessed the church in the United States is because of the myriad experiences and gifts of its current 50,000 women religious and the multitudes of dedicated women who have preceded us,” Mother Mary Clare Millea, who the Vatican tapped to lead the probe, said at Tuesday’s news conference in Rome.

Previous Ask a Jew: What’s it like to be Jewish at Christmastime? Part 1
Next Why Christianity is Bad For Asperger’s

About 35 miles west of the Kroc Church and on the other side of the state line, Whitworth Church will also be hosting Easter services this year, but within Washington’s tighter COVID restrictions, albeit at greater capacity now that Spokane County is in Phase 3 of the mitigation plan.