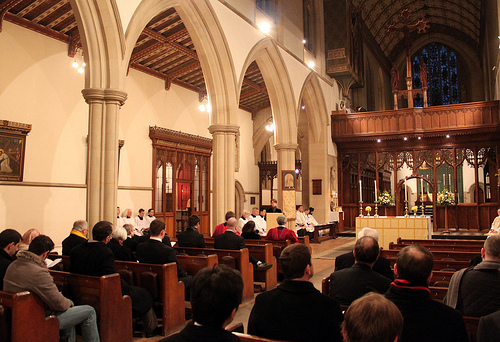 The upside of spiritual community 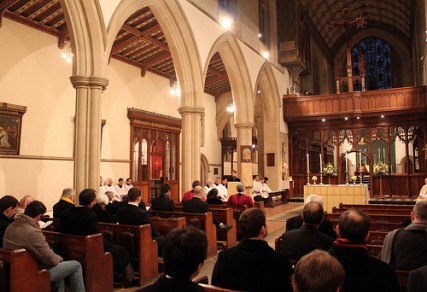 My life as a Roman Catholic hinges upon being a part of a community of believers.  Indeed, Christianity in general is a religion for a group of people as is most organized religion. I think that is the “organized” part of religion — people share their beliefs through public rituals and shared symbols. When I consider my life with God I can see it in two parts, the personal and the public.

The private aspect, however, is less formal and ritualized and more spontaneous. What I believe privately about God and the story of God’s people can belong to me alone and discussed between God and me. I can create rituals that have deep personal meaning to me around memories and events that are similarly particular to me. Taking my belief outward into the realm of the public means often negotiating details in order to find consensus, especially regarding liturgical celebrations. While the public witness of faith may feel more stressful at times because of the inherent compromising, it is incredibly rich in relationship and the feeling that I am connected to and grounded in other people.

An overview of a Roman Catholic life involves many public engagements such as liturgies and sacramental celebrations. I am called to celebrate the central mystery of Catholicism, the Eucharist, at least once every seven days although I am invited to do so every 24 hours as well. Celebrating the Eucharist demands I look beyond my own experience of God and look to the way in which God has made Godself present to the world and to ponder the universal human experiences of hope and sorrow. Listening to Scripture as a community requires each person to encounter God through other people as well as directly through the Spirit. Listening together also encourages people to reflect on different perspectives and possibilities that can help ward off too narrow or too ponderous interpretations.

Liturgy is also an act of praying together as a community for the needs of the entire group and helps us to remember the ups and downs of those people with whom we share space.  For myself, hearing my own voice praying among the chorus of others give me great confidence that I am truly on a good path toward holiness and that my own life is but one among many that are equally dignified and loved by God.

Celebrating the Eucharist in a community is a wonderful opportunity to remember and witness the love and providence of God present across time and place made real for all believers. I stand not only for myself but also with my neighbors and my ancestors in sacred time. Roman Catholics, like most Christians, believe the church exists in three forms simultaneously: church militant (here on earth), church triumphant (believes in Heaven and the Saints) and church suffering (believers in Purgatory — among Roman Catholics). Each time a liturgy or sacrament is celebrated all three forms of church are present and engaged. My community extends beyond my human understanding of time and space.

In many ways to be a Catholic is to belong to a community because the witness of others to your faith helps discipline and inspire you as well as the sharing of faith with in both comfort and challenge.  I can be a believer on my own. Being a Christian requires me to love my neighbor and act on my faith in a way that is tangible in the lives of others.  Being a Catholic instigates a deeper commitment to community through a constant cycle of sacramental celebrations and liturgies. Community is not unique to Roman Catholicism as we can see its importance in the lives of Hindus, Muslims, Jews and most Christian denominations. For Catholics we see our communal life here on earth as symbolic of the peaceful relationships enjoyed in the eternal New Jerusalem. Our bonds are made visible so that charity, love, reconciliation and unity are made real in the lives of all and not just philosophical ideals.

Check back Friday part two of this series, “The pitfalls of spiritual community.”

Join us at 10 a.m., April 6 at Revel 77 Coffee for our next Coffee Talk where we'll discuss the concept of spiritual community.