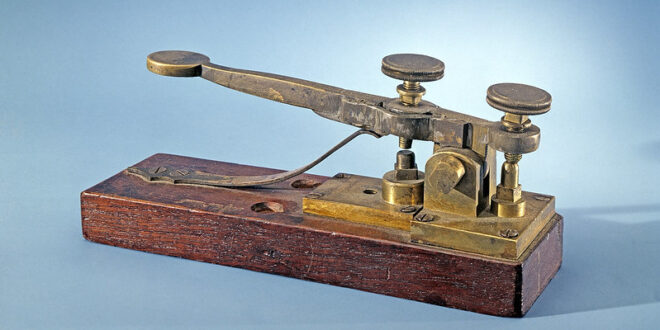 Of course, it wasn’t a tweet, but it foretold its modern equivalent. Its 22 characters signaled a future inconceivable to those witnessing the event. The date was May 24, 1844, 178 years ago tomorrow.

That morning, in the chambers of the U.S. Supreme Court, members of Congress watched Samuel Morse tap out the world’s first official telegraph message. Almost immediately, Alfred Vail, Morse’s assistant, replied from a railway station in Baltimore, 44 miles away, with the same exclamation from the Book of Numbers, 23:23: “What hath God wrought!”

That event “marked the beginning of the telecommunications revolution.” Perfecting this method of instantaneous electronic communication “contributed to the rapid expansion of the West” during the 19th century and “laid the groundwork for today’s 24/7 mass media culture.” Advances in transportation and communication liberated people from isolation and brought Americans into a global economy.

The telegraph “probably lowered the cost of business transactions even more than the internet has so far today.” Its use spread rapidly as commercial applications grew. Farmers “increasingly produced food and fiber for far-off markets.” Merchants and bankers could learn distant prices, and railroads telegraphed train movements “to avoid collisions on the single tracks of the time.” When Morse tapped out those four words, he was “fostering globalization and encouraging democratic participation.”

Simon Winchester explained additional significance of Morse’s invention: “Few patents in world history can be said to have had quite the same impact on society” because once electricity was “massaged in certain ways,” it could “pass across great distances … to do innumerable things.” One use “stood out above all others. It could be made to power a subtle kind of device that would move information — a weightless thing … requiring little power to transmit it along conducting wires. If such a thing worked, it could move this information … instantly and over any distance.”

It worked so well that today I video-chat with friends in China on a device a fraction the size of Morse’s conglomeration of electrical paraphernalia.

At dawn on May 23, 1844, two young men ended a night-long religious discussion in the home of Ali Muhammad, a merchant in Shiraz, Persia. His guest was Mullah Hussein. That discussion is now commemorated annually in tens of thousands of locations over the face of the earth. Throughout that night Ali Muhammad, now known by the title “Bab” (Gate), revealed to his guest that he was the Promised One of Shia Islam.

He was the Gate through which his followers would recognize one greater than himself, the Promised One of all the world’s religions. The Bab was martyred six years after that announcement. Nineteen years after the Bab’s declaration, one of his followers, after nearly losing his own life in a subterranean dungeon, and after a decade of exile, declared himself to be that Promised One. The world now knows him as Baha’u’llah, founder of the Baha’i faith.

By the turn of this century, the Baha’i faith was geographically  the world’s second most widespread religion, second only to the aggregated denominations of Christianity.

Tonight Baha’i communities in Spokane, Johannesburg, Papua New Guinea, Brussels, Addis Ababa, Kyiv – thousands of locations throughout the Northern and Southern Hemispheres – from the Palouse to Vanuatu in the South Pacific; from metropolitan New York, London and Paris, to sparsely populated agricultural communities in rural Alabama, Kansas, Nevada, Uganda and Chile; as well as indigenous peoples on every continent except Antarctica – all will commemorate, within the context of their myriad cultures, that momentous announcement of May 23, 1844.

Baha’u’llah’s copious writings call upon humankind to unite in its love of a single Creator. He exhorts us to recognize the essential unity of all religions, the unity of humankind, the equality of women and men. We must build on that recognition to create a just, equitable global civilization that releases the potential of each human being to further that civilization far into the future.

Each May 23rd commemorates “the opening of the most glorious epoch in the greatest cycle which the spiritual history of mankind has yet witnessed.” This “most eventful period of the first Bahá’í century” spanned a brief nine years and “terminated with the first stirrings of a still more potent Revelation” whose day “every Prophet hath announced” and through which “God hath proved the hearts of the entire company of His Messengers and Prophets.”

Technological advances have outpaced spiritual advances. Humanity remains fraught with problems precedented and unprecedented. Wars we’ve had forever; climate change, not so. We must deal with the latter spiritually to avoid more of the former.

We can find hope in Baha’u’llah’s 19th century promise, even more meaningful today than when first spoken: “These fruitless strifes, these ruinous wars shall pass away, and the ‘Most Great Peace’ shall come.”