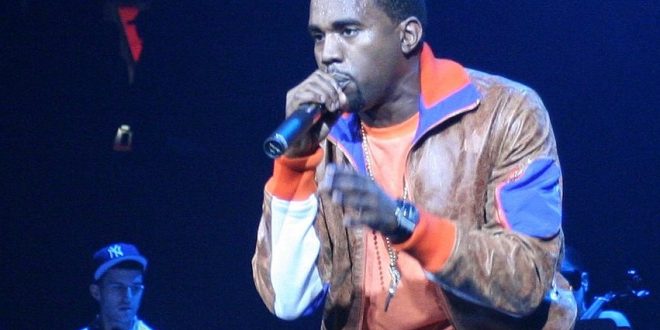 West performing in Portland in December 2005 as a supporting act for U2 on their Vertigo Tour. Photo by Phil Romans/Wikipedia

The Transformative Power of Kanye West

His name alone should conjure some image in your head. Some people recognize him as a platinum selling rapper and the record holder for most consecutive studio albums to debut at No. 1 on the Billboard 200. Some might know him for his marriage to Kim Kardashian. He’s a fashion designer, entrepreneur and record producer. He’s known for his antics at award shows, one time stealing the microphone from Taylor Swift during an acceptance speech.

His social media posts, and social stances have been criticized across the political and social spectrum. He once said, “George Bush doesn’t care about black people.” He supports President Trump and can often be seen sporting a MAGA hat.

He’s been named twice to the 100 most influential people in the world. Whether you like him or not, Kanye West represents “Pop Culture” as we know it today.

Everyone’s Heard of Him

In spite of all the controversy, or maybe because of it, you probably have heard about him before. But there is something else happening in Kanye’s life right now. Something that I find fascinating. And that is his very public faith journey.

In January of 2019, West formed an American gospel-rap group called Sunday Service. His Sunday Services have been held across the country, drawing large crowds.

In an interview with the View, West’s wife, Kim Kardashian said the following about his Sunday Service,

“Kanye started this, I think, just to heal himself. It was really a personal thing, and it was just friends and family, and he has had an amazing evolution of being born again and being saved by Christ.”

West was even recently caught on TV, discussing the need for his wife to dress more modestly, saying it was affecting his soul and spirit. In the clip, Kim declares that she isn’t in the same spot of transformation as he is. It might be one of the more real moments portrayed in the show, showing how people move through their own spiritual journeys at different paces.

His upcoming album “Jesus is King,” speaks to the change that is happening in his life, in a very public and often criticized forum.

As Daily Wire columnist Michael Knowles recently said regarding the exchange between West and Kardashian,

“Kanye says all of that to her and then her answer is great too, because she said you’re going through this transformation, but I’m not where you are necessarily, maybe I’m a little behind where you are. I love it, it’s an interaction that the culture is working out right now and Kanye West is a little ahead of the curve, because Kanye West has always been a little ahead of the curve on pop culture. That’s why he’s probably the leading pop culture figure in the United States. I think this is a great thing, and we can either react to it by knocking Kanye West for not really knowing everything politically, and not really knowing everything spiritually, and getting some things wrong here in there, or we can react to it with encouragement.”

Now, I don’t know whether this change is genuine or not. But I certainly feel like I should give him the benefit of the doubt. Regardless of where you fall on West himself, his internal divide between where he is and where he proclaims he wants to be, is really a reflection of the human desire and drive to become better than we were before.

If nothing else, Kanye West’s very public change can teach us about the radical transformational power of the atonement of Jesus Christ. With His Grace, our past controversies, our past mistakes, don’t matter. We can move forward with his help, confident that those scarlet sins of the past have been made white as snow.