Home / Commentary / The story of our hands, bodies 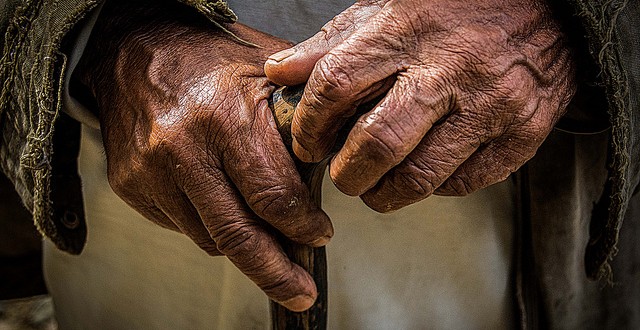 The story of our hands, bodies

One of the curious side effects of my vocation is that I spend an unusual amount of time looking at people’s hands. On most Sundays I have the privilege of carrying the paten (Church word alert! The paten is the little, ceremonial plate on which the bread rests during the Eucharist) and of distributing that same bread. This is the bread about which Jesus tells us the strangest and most amazing thing: that he is present in it; that somehow it is him.

In moving across the communion rail, I see one pair of hands after another. Each of them is held out in this beautiful gesture of openness, a gesture that embodies the words of Jesus’ first disciples: Give us this bread, always. Some hands are small and new and fidgety. Some are creased with the story of life. And some hold the proof of hard work: callouses and splinters and nicks.

The tradition is that Jesus followed his dad into the carpentry business. And so we may imagine that his hands fell into that final category, that his hands were the hands of one who crafted and labored. Maybe, when you stood before him and he laid his hands upon you to heal you, you would see written on his fingers the evidence of tables and chairs formed out of rough wood, of beams pushed into place to form a ceiling or a foundation.

These days, I am building a wooden planter that will go on our back deck. Phoebe and I used to garden a lot, but in the several moves and several stresses of the past few years, we have planted little. We miss the tomatoes and the peas in whose growth we have participated; notwithstanding the grocery store’s best efforts, nothing tastes like the food that comes from your own garden. And so I am now cutting and drilling and gluing a vessel for the soil.

I don’t imagine that my hands will get as hardened as they did when I was a stagehand – back then I had something like a groove written into my palms by rope and 2 x 4 and pipe – but it remains oddly moving to see my hand change over the course of this project. The cedar that I am using is hardy and rough in equal measure, and parts of are inevitably ending up beneath my skin, an outward and visible sign of the progress of my carpentry.

The stories of our lives are written into our very bodies. When Jesus left the tomb and appeared to his friends, his body bore the marks of his crucifixion. But before that, his body bore the marks of the hammer and the lathe. Maybe we can imagine those marks – the fingernail with a dark hematoma, the pinkie scarred years ago by an errant chisel – as Jesus holds up the bread and says to you and to me,

Take, eat. This is my body.

During both my healing journeys, I never really feared the Lymphoma, never got angry at it, never depressed, never saw it as somehow an enemy, to be fought, battled and defeated, though it certainly represented the antithesis of my existence.