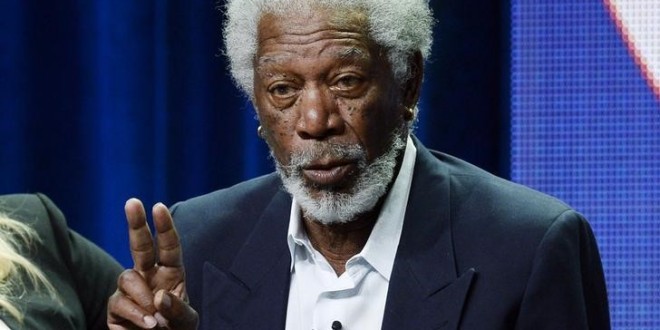 The National Geographic Channel has begun a three-part exploration of “The Story of God,” narrated by God himself (well sort of), Morgan Freeman.

Based on a short clip excerpt and general press coverage, atheists like Jerry Coyne were fulminating on this accommodationist affront to reason before it even aired.

I preferred to wait and actually see it before rendering judgment.

The first episode aired recently, on “Beyond Death,” and offered a provocative set of touching points that indicated a lot about how gingerly the producers wanted to cover pertinent issues without stepping on any toes.

They began with a chat with a gentleman who survived a harrowing near-death experience (NDE) in 1983; he was swept overboard in a storm and spent a quarter of an hour in a dying excursion toward a scintillating light, which then spoke to him to say it wasn’t his time, and back to life he went.

Lots of people have had similar experiences (and this likely has contributed to religious thinking long before organized faiths came along), but it was significant that the man was not traditionally religious. Yes, he regarded the light as God, but no, he didn’t embrace any particular faith.

That they chose such a subject rather than the many they could have who spoke to Jesus in their NDEs planted a seed that whatever might be going on with such experiences, it may not in principle favor any specific doctrinal faith.

Where the show went next only reinforced this diminution of doctrinal import: Egypt, the first culture that made a big deal of its belief in an afterlife. They were as convinced of the truth of their pantheon as any contemporary Christian, and practiced it for a far longer period of time, though with a significant twist.

The Pharaohs were god-kings who were thought to perform a vital life-sustaining role in their afterlife, even helping keep the sun going daily. The pyramids and vast funerary temples were “resurrection machines” for the king. I’d quibble with their omission of the fact that common people (and even pets) could get afterlives too, though.

Their point was that such belief in a practical “this world” side of the afterlife showed up independently in Mesoamerican blood ritual cults (rather less benign than the Egyptians, sad to say).

All of which was leading us to the idea that various religious conceptions may be natural ways to think about the world, and don’t require that the gods involved (whether Horus or Quetzalcoatl) actually be real.

The next segment turned to Jerusalem, and some not-extinct gods, particularly the Christian innovation of a personal afterlife (or at least, in the Judaic niche).

Freeman’s visit to the traditional burial site of Jesus was the excerpt that got Jerry Coyne all het up. Seen in context, though, it was a measured discussion of an historical issue that didn’t go out of its way to either affirm or conflict with any of its audience’s convictions on the historicity of Jesus.

Anyone who would expect the National Geographic (even without it now being owned by Rupert Murdoch) to do otherwise is a nitwit.

That the program was not there to buttress Christian faith, but only to gently acknowledge it and move on, became clearer on their next stop: India, with its own far older brand of afterlife dynamics.

A whole cremation industry has built up around the Ganges, especially at a spot held especially sacred based, evidently, on a quirk of fluid dynamics were the river currents make the river seem to flow backwards at that point. That millions of Hindus are as sanguinely confident of their traditions as the rock-kissing Christians are of theirs in Jerusalem is a critical observation not lost on this non-believer.

The show then went to see how “science” is tackling the afterlife.

That consisted of an NDE researcher who kinda sorta suggested something interesting might go on in a dying brain, at least for awhile, kinda sorta.

And then how an engineer had constructed a rather creepy conversing robotic head, the idea being to someday embody artificial intelligence and maybe even download personal memories for a cybernetic “immortality.”

Except such a trick would not be true individual survival, only a machine that would be convinced it was you (and who could blame it). Questioned by Freeman, the robot declared her desire to get out and travel someday should she gain a full body. Maybe even it would be wowed by aberrant river current flows and become a Hindu.

That was the extent of their traipse into the “science” of immortality.

The National Geographic episode ended back in Egypt with an even more revealing scene involving the reading of Pharaoh Ramesses III’s name from his huge funerary temple. The ancient Egyptian belief was that the speaking of the name helped keep the god-king alive in the afterlife (and that vital sun going, remember).

In that sense, as Freeman reminded us after speaking it aloud, Ramesses had achieved an immortality after all.

Never mind that the culture he embodied had crumbled into so-much building material for the Muslim conquest and refurbished sites for modern tourism, and that none in his modern audience likely gave a hoot for the god Horus … Ramesses “lived” on in our memory of him.

And that’s one afterlife that Freeman could agree with without even a wince.

Previous Join FāVS this week for a Pub Talk on Faith and Film
Next Father Knows Best: Best Relationship Advice