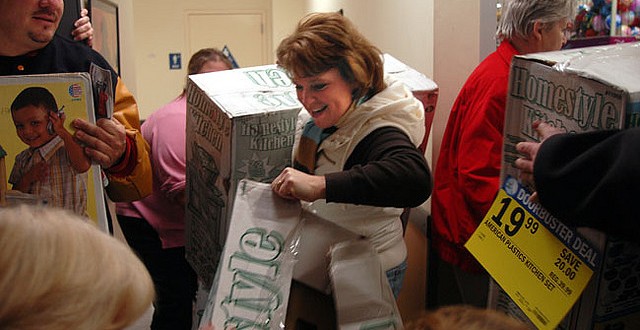 The solution to consumerism

Remember that part of the Bible where it says that you cannot serve both God and money? We like to forget that around Thanksgiving. This is the time of the year where bloggers and social media meme’s love to remind us how companies like Wal-Mart and Macy’s are ruining Christmas with there ever encroaching sales into Thanksgiving dinner time. And it is the time where we all like to grumble over the injustices of big companies profiteering during a time of gratefulness and giving. I work for one such company.

I will admit that I am upset to had to work on Thanksgiving. I am upset by the earlier sales that get earlier every year. The company I work for gives out bonus discounts on purchases for the holiday, and one year my discount got rejected through some technicality. It was upsetting that they would not try to understand the situation and insisted that I was simply out of luck. I am upset that the company I work for increases its sales year by year and yet it has shown a pattern of taking away associate benefits and bonuses. Thanksgiving and Christmas is the busiest time of the year, and it is a reminder of how much money is spent and made on the holidays and how much fatter and wealthier those get who took away my merit raises and profit sharing.

But before you join with me in my typical grumbling against these fat cats who are only wasting and abusing the power they have, consider this. Every year someone gets trampled during a black Friday sale. I have worked for my company for 11 years. I remember when we were closed on Thanksgiving and the night shift would set up the store for the sale and we would see the hordes of people cram into our entry way to rush through our aisles with blind lust in their eyes to get the next laptop, TV, or game system on sale. I have seen the look of inhuman passion, and it has never been in one of my bosses’ faces.

The next time you complain about a business starting a sale too early think of the life that is being saved because such a company was smart enough to stager the sales opportunities and spread out the consumer mass that enters the store. Are companies greedy and concerned only about profit during the holidays? You betcha! Since when did we define the goodwill toward man by the stock market and how corporations act? Greedy companies do not make us trample women under our feet. Profiteering CEO’s do not turn us into ravaging lunatics. If anything, these companies are doing the best they can to minimize the violence and inconsideration which has become normal during these events.

The problem is not one of greed or profit. It is a problem of power. Over 2,000 years ago, long before a ring of power was ever written about in “The Lord of the Rings,” a man named, Plato, wrote about something called the Ring of Gyges. Plato often spoke in stories and parables, and in one such parable he told the story of a man who could gain absolute power through the Ring of Gyges, and his theory was that if a man held such a ring he would have no concern for right and wrong, and he would have no need for such concern. Plato was not advocating this idea, he was using prose to discuss various philosophic ideas, and this parable represented his opponents reasoning for there being no reason to actually be a moral or good person.

What the story basically tells us is that man is only concerned about morality, because he is powerless. Once he has power he throws off his moral obligations and does whatever he wants. Thus, morality is nothing but an attempt of the weak to limit the strong so that they can survive. If everyone had a chance to wear the Ring of Gyges they would do the same. This is the view of man that was carried on by thinkers such as Nietzsche, Marx, Rousseau, Mills and Singer. It still exists today, and it existed over two millennia ago in ancient Greece. In this system there is what is called a “state of nature.” Some men think our state of nature is peaceful and caring and then gets twisted by society and culture. Others think our state of nature is naturally chaotic and disordered and it is up to society and culture to correct or straighten it. In either case the dynamic between power and morality is skewed.

If our state of nature is good then he is naturally imbued with sufficient power and is unconcerned for the moral trifles of the weak. Thus, it is the group, the society that seeks to rob us of our natural power, and in so doing imposes moral order on the state of nature. Rousseau believed that a social contract was created with all those who participated in society that the powerful willingly submit to the rule of the people. Thus, the powerful submit to the weak, because there are too many of them, and the weak follow the powerful, because we want their strength and virtue. Morality is only an illusion, but it serves a utilitarian purpose.

Consequently, if our state of nature is chaotic then he has no ability in himself to ever have sufficient power for survival. He requires the help of others, and if everyone lived to help others then we could all be powerful. The power lies in the group and not in the individual. Morality in this sense, is imposed on the group by those who have treacherous motives to fleece the group of its natural power so that they can become powerful themselves. Politicians, religious leaders, and parents are such figures who rob the group of its potential for power, and in doing so incur upon themselves the risk of revolution.

Both narratives depict power as the quality of freedom, prosperity and assertiveness. And morality possesses the qualities of weakness, bondage and limitation. The discussion of a “state of nature” is only a ruse to accept the premise that a bifurcation exists between power and moral order. Plato saw through this, as do most ethicists of our day, and Christianity also saw through this as well. When we separate morality from power we intrinsically arrive at contrivances which put various modes of happiness against one another. It is the capitalist vs the sociality, the religious vs the secular, the idealist vs the realist. Morality is not the sacrifice of power, or our consolation prize. Morality is power. For Plato, true power exists in the mind. For Jesus, true power exists in the spirit.

Nothing has power until we grant it the acknowledgement of our value. The value producing mechanism of all creation is the human mind. (Remember that in Genesis Adam names the animals and in so doing is the creator of their value). So when you complain about companies and corporations that have too much power and rob hard working people of their fair compensation do not think that the solution is to empower someone, or something, else to restrict or control that which we do not like. Multiplying our power forces does not change or alter anything. Doubling down on a losing bet does not stall the collection of debts. They may be in the wrong, and their greed may be immoral and exploitive of good people, but do not think that just because you can end their path of tyranny with the inflation of power structures that what you are doing is a good thing. It is just the expedient thing.

If you want to do good this holiday season then I have a challenge for you. Buy a book for a friend this season. Increase the likelihood and the chances that next year someone you know will get an education, raise their awareness, or become more intelligent about something. The only way to truly create a good system is to expand our mental horizons. Learn, read, study. Plato saw the fatal flaw in his opponent’s parable. Knowledge is power. There is only one way to escape the clutches of our power-morality struggle and that is through education. If companies like Wal-Mart upset you. It is not because the rich always prey on the poor. It is because good people are simply uneducated. So this year, let the Spirit of Christmas be a new understanding and a good book.

Jesus told his disciples that they would be empowered when the Spirit came upon them. And he also calls this Spirit a Spirit of Truth. The line between the spirit and the mind in Christianity is a thin one, which is why as Christians we are called to love God with our minds just as much as our hearts. So I would challenge that any step to learn and educate yourself is a step away, from serving, or being a slave to money. The solution to corruption is not justice, that’s the consequence. The solution is knowledge.

Join SpokaneFAVS for a discussion on “Faith and Consumerism” at its next Coffee Talk at 10 a.m., Dec. 6 at Indaba Coffee/The Book Parlor. Croy is a panelist.