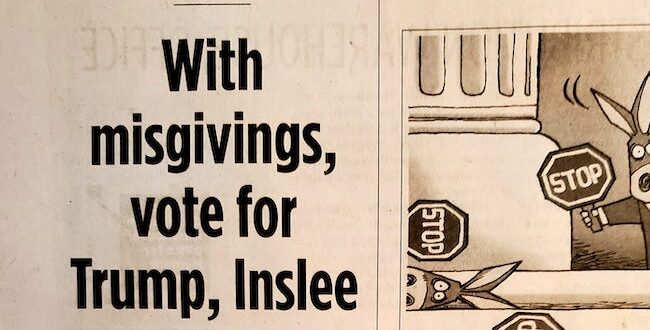 It was a stunning “you’ve got to be kidding” moment.

Scanning the Sunday Spokesman-Review before settling in for a deeper read I caught the headline on the election endorsement editorial. “With misgivings, vote for Trump, Inslee.”

There is no point dissecting the actual editorial. It is despicable, a badly structured, badly written mess that does nothing to reconcile its contradictory recommendations for an electorate that cannot be persuaded one way or another at this late date.

Furthermore, it is an insult directed by the boss, publisher Stacey Cowles, to the hard-working journalists he employs, journalists the president considers enemies of the people.

To date, only two U.S. newspapers have endorsed Trump – The Spokesman-Review and the notorious Las Vegas Review-Journal owned by the GOP mega-donor Sheldon Adelson. The most conservative paper in the country, the New Hampshire Union Leader, has endorsed Joe Biden, the first endorsement of a Democratic presidential candidate in 100 years.

Still, it might be helpful to discuss the process that led to the SR’s Trump endorsement in light of the way things used to work when the paper actually had a process.

As editor of the paper from 2002 to 2008, I served on the editorial board. The board included the owner/publisher, Stacey Cowles, the editorial editor, the news-side editor, and two or three editorial writers. In my time, I worked with two editorial editors, John Webster and Doug Floyd. Both were exemplary journalists whose views were shaped by a deep understanding of issues and facts. John tended to be more conservative, Doug a touch more liberal. But in these times both would be considered like-minded moderates.

The editorial writers represented a wider range of views, but over time tended to be more liberal. Gary Crooks, who became editorial editor after I left and who was eventually laid off, was unapologetically liberal. He worked with Lisa Brown to defeat Cathy McMorris-Rodgers in 2018.

Ethically, I was obligated to keep my political views separate from my responsibility as editor of the news sections. But I tended to be a liberal voice.

The board’s composition often put it at odds with Cowles. Especially during election season, the board would engage in what we might politely call “robust” debates before settling on an endorsement and even then, only following extensive interviews with the candidates or their representatives.

But in the newspaper world the owner/publisher always has the last say. In Spokane, editorials are the institutional voice of the newspaper and while Spokesman editorials never carry a byline, they always represent the publisher’s final word.

Nevertheless, those editorial board debates produced something of a consensus, most often on down-ballot races. But there were times the board was overruled by Cowles. I can recall two times when the board pressed to endorse someone other than McMorris-Rodgers only to be overruled by the publisher. There were similar dictated positions on U.S. Senate and gubernatorial endorsements during my time at the paper.

In the case of The Spokesman the value of the editorial endorsement process was to moderate, somewhat, Cowles’ most regressive political leanings.

But those days are gone.

There is no editorial board, at least as we knew it. The editorial editors and writers are gone. There are no more daily editorials on the local, state, and national issues of the day, a betrayal of a newspaper’s fundamental responsibility to its community. When the publisher does decide to weigh in on an issue, we are told he contracts with an editorial writing company to turn his talking points into an editorial column.

The few inside contacts I still have at the paper are lying low right now, and justifiably. So, I cannot say with certainty how the endorsement editorial came to be. But it reads as a contract production. If nothing else a local writer would have been able to better support the astonishing dual endorsement of Trump and the poster-boy non-Trumpster, Washington Gov. Jay Inslee.

The editorial reads as if it was produced by an out-of-region writer who simply took the publisher’s talking points and produced a quick and dirty translation and, half-heartedly at that. (If someone knows better, please let me know.)

But let me be clear: Under the old editorial board process the outcome might have been the same. But at least the editorial would have made more sense, assuming Cowles could have found an editorial board member willing to write it..

I know this is not the least bit reassuring.

Early Sunday and through the morning and early afternoon, I heard from a number of people disgusted and disappointed by the endorsement. Inevitably, there are calls for subscription cancellations and I suspect there may be some hundreds of those before the dust settles.

I am as distressed by the editorial as anyone. I am all for directing our collective fury at Stacey Cowles. The Sunday editorial is shameful, a black mark on an otherwise good local newspaper struggling to survive in a battered industry.

But do not count me among those cancelling their subscriptions. I will continue to support the newspapers editors and reporters who work tirelessly to provide the best possible local and regional news coverage.

But if you feel you must cancel, throw some support toward Spokane Faith and Values. This digital news site, one of the best of its kind, deserves support under the best of circumstances. But if you want to send a monetary message to Cowles, become a member here.