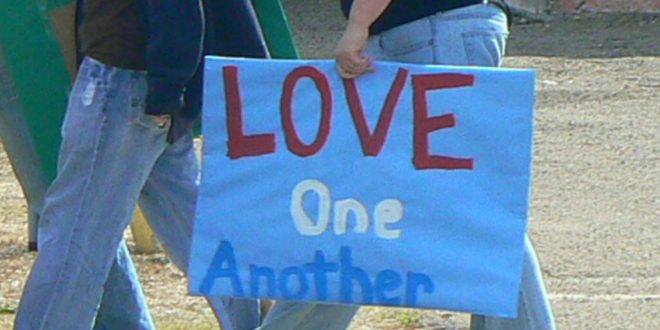 The screaming message: Love is a commandment

Until last week I’d never had the opportunity to immediately do what I’d heard during a talk at church worship.

“Love is a commandment,” my pastor said from the pulpit as he spoke about the implications of John 14. It doesn’t depend on your momentary feelings. It is required of Christians.

And I had the immediate choice to love or do something else because most of the rest of my pastor’s words were drowned out by the unbelievable screaming of what looked like a 2-year-old boy in his father’s arms.

At first I tried my best to ignore the shrieking – and, believe me, it was loud – but after a while the irritation of being unable to listen to my pastor’s talk began to sink in.

The dad eventually carried his son out of the pew and the church proper, but we could all hear the screaming tot in the glass-enclosed entry area.

After the pastor’s talk he went on with the usual liturgy but it took a while before the few words I was able to grasp began to sink in. “Love is a commandment.”

The child was just a normal 2-year-old who wanted his own way, just like all 2-year-olds want their way. The child, who I later learned is the grandson of a friend, was acting normally and was incapable of changing.

My irritation was normal, too, but I did have the capacity to make a rational choice. I realized that anger had no place in a worship service and that the dad and his son needed love – love I didn’t have. And so I spent some time during the worship asking God to give me the love for this father and son that would empower me to forgive them for something that wasn’t really anybody’s fault.

And that was the point of the sermon. At least I think it was the point since I couldn’t really hear much of it because of the noise. I had to choose to obey Jesus and go beyond myself, with the aid of the Holy Spirit, to love someone else.

That’s always what love is – a choice to go beyond yourself for the sake of someone else. Jesus did that and paid for it with his life. The least I could do was confess my unwillingness to love so that God could give me the love that they and I both needed.