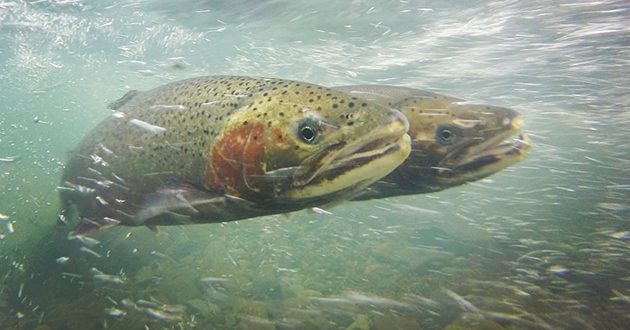 The salmon: its spiritual importance and conservation crisis

With the salmon runs being depleted in the Columbia and Snake Rivers due to the dams, habitat loss, rising temperatures and other factors, Julian Matthews and Lucinda “Luci” Simpson, board members of Nimiipuu Protecting the Environment, described the spiritual importance of the salmon and why action must be taken to save them.

According to Simpson, during the time of the creation story, the Creator gave people the salmon and said it would give its life for them to live so that the people could sustain themselves.  In return, the people promised to do what they could to take care of the salmon and would harvest only what they needed.

She said that as part of their religion, before Christianity was introduced to them, they would have a salmon feast that honored the fish and prayed to the Creator in thanks for giving them the salmon to sustain themselves.  They would pray over the salmon as well before indulging in the feast, which included roots and berries as well.

She added that the salmon symbolizes the cycle of life because it is similar to people where it is born in one place and completes its full circle by leaving where it was born and eventually returns to it to enter the spirit world.

Matthews said that the salmon has been a stable part of the river tribes’ diet and way of life for thousands of years, however, because of the current depletion of salmon, the tribes do not eat nor can fish for salmon and has had an impact on their health.

“The waterways are getting so polluted and heated…and the dams, in place, holds the water in place and doesn’t let it flow free, so there’s sediment that they have to clear out of the water and that makes it a problem for the fish,” Simpson said. “The fish have trouble with the fish ladders that they have, they’re not designed for fish to survive on those ladders; they have curves and dens in them that make it very difficult for the salmon to even survive.”

Matthews said that when the fish go up inside the ladder, the eggs are removed from them and are incubated until they spawn and are released from the hatcheries to go back to the ocean.  However, he said that the fish get stuck in the reservoirs and are trapped in the warm waters, resulting in their death.

Not only have the conditions of the waterways and dams have impacted the salmon, Simpson said commercial fishing has contributed as well.

“I know that the Nez Perce people have always in the past just taken what they need and leave the rest, but the commercial fishermen and the other fishermen they take and take and take and don’t think about the future,” she said.  “Even when we go gather our roots and berries and things we try to leave some for others so that they can feed their families and with the salmon that was our subsistencefor many years.”

Types of salmon that Simpson and Matthews said are disappearing include steelhead and chinook, which has impacted other wildlife that depend on the salmon, such as the orca that needs the chinook in order to survive.

“To me, people don’t view salmon as very important. If they catch them they can charge them, people can charge a fee to catch the fish or sell fishing poles,” Matthews said. “We need to look at it more as a part of Mother Earth and created by God to be here and the validity of their living here is just as valid as mine or yours.”

In order to save the salmon from possible extinction, Matthews said that people should take action including supporting activism in dam breaching and removal, write to elected officials and voting for leaders who support protection of salmon.  He added that it is not enough to complain on social media, people have to take action and make their voices heard for it to count.

“It’s going to take everyone to work on this issue…all of us are stakeholders and it’s gonna take all of us to work on what is at stake here,” Simpson said.

Your donation will help us pay journalists to do more reporting like this.

Previous Ask A Catholic: Guns in Church
Next Ask An Evangelical: Spiritual, not Religious