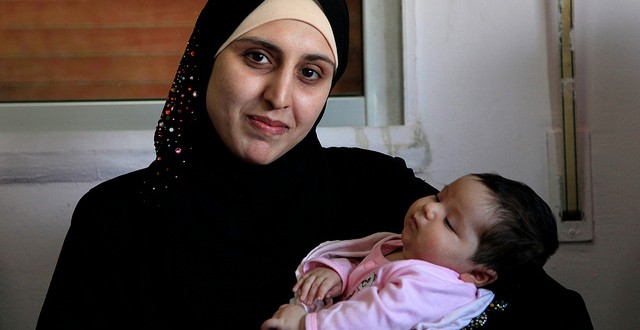 A Syrian refugee and her newborn baby at a clinic in Ramtha, Jordan/Photo by Russell Watkins/Department for International Development

When the current refugee crisis in Europe started receiving mainstream attention, I thought it was interesting that the Western world only then started talking about it. After all, there has been a refugee crisis in the Middle East for years now. Syrians, Afghanis and other people primarily from the Middle East have been seeking refuge in more stable neighboring countries since the start of the Syrian war and the other destabilizing wars in the region. Turkey, Lebanon and Jordan have each taken in hundreds of thousands of refugees. Lebanon deserves special attention since it has over 1 million refugees. That is a huge influx of people for a country of only about 5 million people. This would be the equivalent of Germany receiving approximately 16 million people. Could you imagine how quickly their politicians would act to resolve the underlying problem and give the refugees a chance to go home? But because the problem was far away and mainly affected countries in the Middle East, no serious efforts were made to stop the wars that were forcing people from their homes. Here in the United States the refugee crisis did not have much attention until it started affecting Western people that reflect our own values, religion and culture.

During my time as a refugee in Germany during the Bosnian war, my family and I experienced firsthand the bigoted opinions and islamophobic tendencies of Western Europe. In the school that my sister and I attended, teachers taught that refugees only come to Germany to take advantage of the social welfare system and that they don’t have jobs. I was bullied throughout my time in Germany because of this, even though both of my parents worked full time jobs for the entire five years that we lived in Germany. As many people know, Turks are a significant minority group in Germany, yet many are denied citizenship for generations. Muslims are definitely seen as uncivilized and backward. In France, burkas are forbidden, even though only a few hundred women even wear them in that country. Islamophobia actually intensifies in the Balkan and Eastern European countries. I’m not at all surprised to see those countries closing their borders and humiliating families by doing such things as tripping and beating them. In the former Yugoslavia, the Bosniak ethnic group, most of which is comprised of Muslims, could not identify themselves as Bosniak, but had to instead identify themselves as Muslim. This wasn’t even an option until the 80s, meaning that for 40 years, the Muslims of Yugoslavia had to choose to be one of the other recognized ethnic groups, namely Croats, Serbs, Macedonians or Slovenes.

As Americans, it’s easy for us to talk about compassion and the need to accept others. The idea of pluralism has been a staple of American values from the beginning. Although we have right-wing extremists who actively fight against this, we still manage to progress our values. In order to resolve the refugee crisis we need to work on the core problems of the crisis, namely ending the wars and fighting against islamophobia.

Join SpokaneFAVS for a Coffee Talk forum on “The Refugee Crisis” at 10 a.m. Oct. 3 at Indaba Coffee, 1425 W Broadway. Rasic is a panelist.

Previous How should we respond to migrants, refugees?
Next Thanks for a Great Coffee Talk Today on the Refugee Crisis

Can Peace-Making Include Protests?