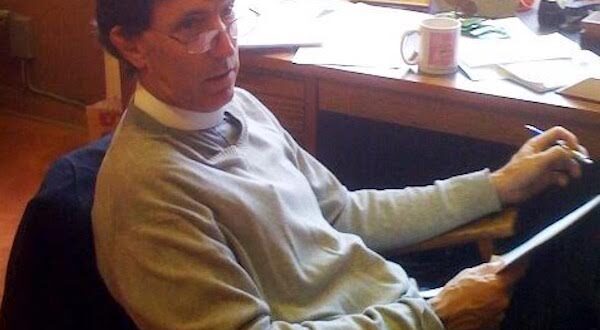 Bill Ellis in his office at St. Johns/Contributed

The Rev. Bill Ellis, former dean at the Cathedral of St. John the Evangelist in Spokane, dies at age 66

The Rev. William “Bill” Ellis moved from Spokane to Bend, Oregon, after he retired from the Cathedral of St. John the Evangelist in 2017, but still news of his death has many in Spokane reeling.

“It’s certainly a loss for the community, even though he didn’t live here anymore. His friendship and his influence carried on. He will be missed,” said retired Episcopal Bishop Jim Waggoner.

According to an announcement from Trinity Episcopal Church in Bend, where Ellis attended and had served as rector before moving to Spokane in 2006, he had been well and active, even overseeing the church’s stained glass window restoration project last week. His death came as a surprise.

The Rev. Martin Elfert, who served as curate at St. John’s from 2011-2015, said Ellis was a deep thinker who loved philosophical and theological questions.

“To encounter Bill in the pulpit or in the classroom is to witness someone wrestling with Scripture and reason and tradition and experience, wrestling like Jacob with the stranger in the night, all to bring us as near as we can within this life to truth or love or God,” Elfert said at Ellis’ retirement party.

Elfert, who now serves as rector of Grace Memorial Episcopal Church in Portland, said Ellis’ sermons were presented as arguments, which made them engaging and thought-provoking to many.

Elfert remembers sending the dean e-mails about philosophy or Scripture and getting long paragraphs back in response.

Ellis continued his musings in Bend.

In an e-mail thread sent to friends from his church just the night before he died, Ellis wrote about the coronavirus, “We have lost things we value very deeply, and we don’t know for sure that we will get them back.”

His contemplations went hand-in-hand with his keen intellect.

Waggoner said Ellis was a born scholar and teacher.

“In many ways he was a genius,” Elfert said. “I think he had the challenge a lot of super smart folks had, and that was what to go super deep into. He said on one occasion he reckons he could have gotten really good at Chess, or really good at church.”

Waggoner said his wisdom helped him connect with parishioners. He said Ellis was able to gently support ministries within the church and equip congregants to carry out their individual callings.

He was the driving force in St. John’s becoming an LGBT welcoming congregation and in 2013 when the church officiated its first gay wedding, Ellis was careful to make sure it was done in a way that was sensitive to conservative members.

“He had an eye for understanding,” Waggoner said.

“He was totally was an activist, but not a table pounding, sign carrying one,” Elfert said. “He had an understated, unassuming way of effecting change.”

Charlie Byers, a parishioner at St. John’s, reminisced that Ellis was one of the few priests who could preach the Gospel to a guy like him.

He said he used to wonder if he was too cerebral for religion.

“Bill was great at getting me to reach past that. He was intellectually serious and guided by a profound faith. That always inspired me,” Byers said. “I’m very grateful to have had him in my life.”

Ellis is survived by his wife, Beth, their two grown daughters and his two sisters.

“I was prepared to go to his funeral in 30 years. I’m not really prepared for it now,” Elfert said. “And here’s the complexity of grief in the Spring of 2020, we can’t actually gather. We’re deprived of having a funeral.”

*Bill Ellis was a frequent guest columnist for SpokaneFāVS. You can read some of his writings here, and here.

Previous Reader Submission: COVID-19 raises long-time questions
Next Ask A Baha’i: What are some misconceptions about your religion?