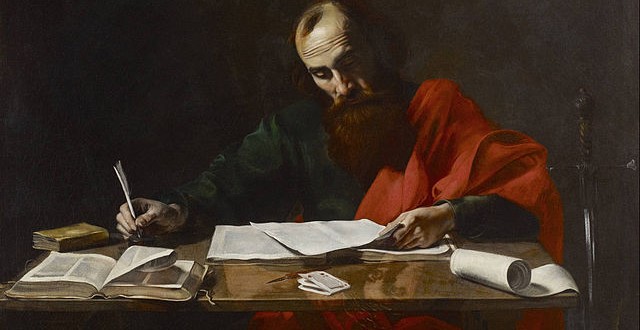 It is debated which epistles Paul actually wrote. Ephesians, Colossians, 2 Thessalonians, Titus, and the Timothies are debatable. These are not believed to be deceptive forgeries, typically speaking. Rather, it has come to be believed by many that faithful reconstructions of an Ethos could be personified by a particular community. Paul himself spoke of those who follow Apollos, and those who follow Peter, and such. Thus, there were Pauline communities and Petrine communities, and later it is even believed that the Johanine community constructed the disciple named “John” to play a part in the book of John. This is one possible manner in which the early faith communities identified themselves and distinguished themselves like we do today through denominational affiliations.

The author of Ephesians believes that all heavenly blessings come from Christ, or are rooted in Christ, which would suggest a heavenly existence for Jesus at the time of the writing (1:3). In fact, the author of Ephesians makes the exaltation of Jesus more explicit then anything in the Pauline corpus, save the Philippians creed. It says, “That power is like the working of his mighty strength, which he exerted in Christ when he raised him from the dead and seated him at his right hand in the heavenly realms” (19-20). For this author Christ went from being dead to directly going to heaven. He knows of no trans-glorified existence on earth where others met his regenerated corpse or saw his body ascend into the sky. For the author of Ephesians the only “body” Christ has for his after-death existence is the Church (22).

The author of Ephesians makes many of the same arguments we have already seen in the New Testament. He says how we have been made “alive” in Christ, contrasted with the deadness of our sins. Thus, the New Life we experience in God is a testimony for the risen Christ (2:5). The author of Ephesians though makes a rather bold statement regarding the after-life which is most certainly not found in Paul, and quite clearly establishes the spiritual model of the resurrection. In Ephesians believers are immediately exalted to exist with Christ in the heavenly realms. Paul often spoke of a future event when this would happen, but in Ephesians the narrative has changed (6).

Colossians is an interesting book. It is very similar to Ephesians in style. The first chapter is one of the great High Christology passages in the New Testament, and in there we see a glorious affirmation of the resurrection. The author says, “he is the head of the body, the church; he is the beginning and the firstborn from among the dead, so that in everything he might have the supremacy… to reconcile to himself all things, whether things on earth or things in heaven, by making peace through his blood, shed on the cross” (1:18,20). The author of Colossians makes it clear, as I have argued before, that it is only soteriologically significant that Jesus physically died on the cross, and not the he physically rose from the dead. This is a distinction made time and time again, in the New Testament, but it is this statement made in Colossians which articulates it the best. There are only a few more mentions of the resurrection in Colossians which are relatively insignificant. There is a correlation to baptism made (2:12-13), and a call for holy living to correspond to our New Life (3:1).

2 Thessalonians has no mention of the resurrection, but it does speak of Christ’s return which does suggest that he already exists in heaven. The author of 2 Thessalonians would be very comfortable in today’s endtimes-paranoid churches. For this author was ready to cast judgment on everyone who did not line up with Christ and send them to eternal darkness.

1 Timothy has next to nothing to say on the resurrection either, except we do find this one little nugget that is tucked away in the middle of the book. The author says, “He appeared in a body, was vindicated by the Spirit, was seen by angels, was preached among the nations, was believed on in the world, was taken up in glory” (3:16). The only witness attributed to the resurrection in this passage is angels. The only appearance we see for Jesus is his earthly pre-death life. In fact, we see here the same synthesis we find in Paul and elsewhere, Jesus’ glorification takes place after belief in him is stated. Thus, there is an implied dynamic between the glorification of Christ and our representation of him in the world.

There are two good references to the resurrection in 2 Timothy. It says, “This grace was given us in Christ Jesus before the beginning of time, but it has now been revealed through the appearing of our Savior, Christ Jesus, who has destroyed death and has brought life and immortality to light through the Gospel. And of this gospel I was appointed a herald and an apostle and a teacher” (1:9-11). Again, it is affirmed that the gospel is equivalent to an appearance of the risen Jesus. Jesus is risen through the Gospel, and Paul’s calling is prompted from the gospel. This author sees in Paul the same thing which he affirms of himself. The Gospel is the theological underpinning for the resurrection of Jesus Christ. And the author references the resurrection to reflect upon his own suffering. For him the resurrection makes suffering in the world bearable, and makes suffering for a cause worthwhile (2:8-9).

This concludes the Pauline portion of the New Testament. We see scarce references which support a resurrection model of physical regeneration, and most references speak of the superiority of theology in interpreting the resurrection so that we relate to a Living God. We will now consider Petrine epistles, James, and Jude. I will save the Johannine material for the end. After this we will look at what the Gospels have to say, starting with Mark and then Matthew. Luke-Acts will be considered together, and then the Johannine material, except Revelation. I have no interest in Revelation for this study as its material can only confuse the topic. Books will be condensed and combined into single articles to save time and space.

Previous Free speech, sensitivity clash in media outlets
Next Ask an Atheist: Which author has most influenced your views on atheism?