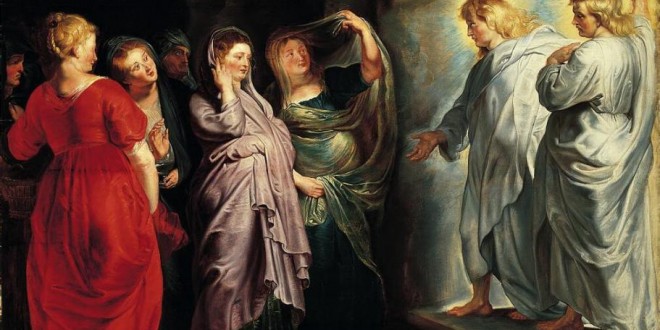 The Resurrection Series Part VII – The Women Who Knew Too Much

All four Gospels mention that there were women on the scene just hours after Jesus rose from the dead, maybe even minutes. None of the Gospels give us insight into the actual moment of resurrection, but the women witnesses do certainly have a lot of valuable information to consider nonetheless. Why are the women witnesses so important? Well, they give us access to what could be a good reason to think that the resurrection of Jesus Christ was actually a historical event, meaning that it can be measured and quantified in the same manner that we measure and quantify other events.

A story of a few women coming upon an empty tomb may not be that exciting. Normally we might think that all they have done is discovered a grave robbery, or a mistaken burial plot. Often way say that there was an empty tomb, but the reality is that the tomb was not empty. It was empty of what was supposed to be in there, but in every account something was near or in the tomb. The accounts vary, but it is often assumed that there was some angelic presence which informed the women that Jesus had risen from the dead, and that is why the tomb was empty.
A tomb can be empty for many reasons, but when we see an angelic being standing next to the tomb claiming that what was inside has been regenerated and glorified then what we have is a much more interesting story. The women witnesses puts the resurrection narrative on the historical map. Without these witnesses there would most likely not be an empty tomb narrative at all. There would be post-mortem appearances, but then to distinguish between these appearances and vision casting we need something more concrete. The post-mortem appearances all happened privately and esoterically. But the empty tomb narrative contains all the elements we need to put the resurrection narrative into a historical context.

The strongest of these arguments tends to be the criteria for embarrassment, which I will deal with in the next post. Other than that, most of these arguments are pretty weak. It should be noted that in the earliest records, which are the epistles, we have no mention of their being women witnesses to the resurrection of Jesus Christ. Our principle text is 1 Corinthians 15, where Paul mentions the witnesses for Jesus’ resurrection and there is no mention of Mary Magdalene or any other woman. So if the women witnesses are historical then they lack the advantage of being noticed by the first recorders of the resurrection event. Typically, this is overcome by the argument that all four Gospels mention the women witnesses.

Unfortunately, we are dealing with a non sequitur. There is no rational argument which can conclude that the number of times a story is repeated increases the credence value for such a story being historical. I have heard hundreds of times the story of George Bush cutting down a cherry tree, but I would never think that simply because I have heard this story many times from many sources that such a story is historical. However, if I hear from multiple sources a story about George Washington cutting down a cherry tree who claim that such a story actually happened then my interest might be piqued. And this is where the second argument comes into play.

We are led to believe that at some point four separate men went about the task of making an accurate historical portrayal of Jesus Christ within their own faith community to hand down the traditions and teachings of Jesus for future retainment. These men valued the rigors and inter-disciplinary dependencies upon writing about history and a religious leader from their past, and so they took seriously the calling on their hearts to make record of this man they called “Lord”, Jesus Christ. We are further led to believe that when they did this, they used the common writing styles of their age and went about employing what is today known as “ancient biography” in order to write about Jesus. Thus, their words and their stories were intended for historical use and historical reflection. Anyone who dares question the historical nature of the Gospels is immediately brought to Luke 1:1-4 to show that these writers took seriously the historical nature of the stories they were writing.

I do plan on going deeper into the historicity of such accounts and how they relate to biblical devotion, but even a cursory look at the Gospels reveals that we cannot put too much historical credence into the hands of the gospel writers. It is clear that they change stories from one to another and do so with an ideological agenda in mind. Matthew has Jesus fulfilling all kinds of Jewish prophecy and fulfilling a role of a King, in many ways. Luke, on the other hand, shows Jesus touching people and working miracles with his hands and with earthly materials. He uses mud. He spits on people. In Luke, Jesus is a very human messiah. John goes in a completely opposite direction. In John Jesus is God. All these authors use many of the same material, but change it to their view of Jesus. While this is understandable it is hardly the shining example of historical integrity.

What seems to become the rather lazy consensus is that we know something happened, and the Gospels tell us of things which happened. Thus, the things which the Gospels say must be the things that did happen, but we have no valid information to make such an inference. If we go back to our original argument we can be quite clear that from the minimal facts something did happen, but this does not give us the epistemic right or privilege to assume that because we have a book of stories that such stories must objectively correspond to that which did happen, even if we claim that such stories are inspired. Now what has been the common defense against this critique is that narratives can preserve what the authentic or essential memory of a person or event is. So while a narrative may not be rigorously historical it can give us a sense of history, nonetheless. So even if we were to discredit all miracle accounts in the Bible, we would not necessarily have the right to say that those accounts are unhistorical. We can extrapolate many things historically from such accounts, and we can do the same with Jesus (of which, I am NOT denying any miracle accounts).

So though we may not be able to authoritatively assert that the narratives describe historical events, we can assert their historical relation to events which must have had great significance for the early Christian community. There is a reason why the Gospel writers felt it was important to write about the women witnesses, and there is a reason why Luke thought it was important to mention his writing method in 1:1-4, but we cannot assume that the passages we want to be historical just so happen to be historical. We have to be able to pry deeper.

This is where the third and fourth points of this argument come into play. The criteria of collusion and embarrassment are very important cognitive tools used to determine the credence value for testimonial datum. If you hear testimony from multiple sources and they all say the exact same story then you have reason to think that your sources are in collusion, meaning that they have concocted a story and their exactness is evidence of their previous influence on one another.

In this sense, it is the variety of differences that actually supports the claim that the writers of the gospels were being genuine in their narrative. Of course, this does not prove that the narratives themselves are historical in the rigorous sense. It only shows that each party was acting independently of each other in deciding that the empty tomb narrative is an important story to tell, and to be generous to the affirming position it is fair to say that each independent writer is acting honestly and in good conscience with his objectives.

In reality the four pieces of evidence that are used to include the women witnesses into the realm of historical consideration rises and falls on the last piece of evidence, the criteria of embarrassment. Up to this point, all we have is that there is some historical sense faithfully transmitted in the gospel accounts. So whether or not the events described in the narratives are real history is still really a gamble and not one with very good odds. The criteria of embarrassment, if successful, can really bring this argument to a close and show us why we should take this story as being representative of real history.

Previous Pastor who took a bullet paves her own way to Ferguson’s frontline
Next Meet Steven Simmons, our humanist writer