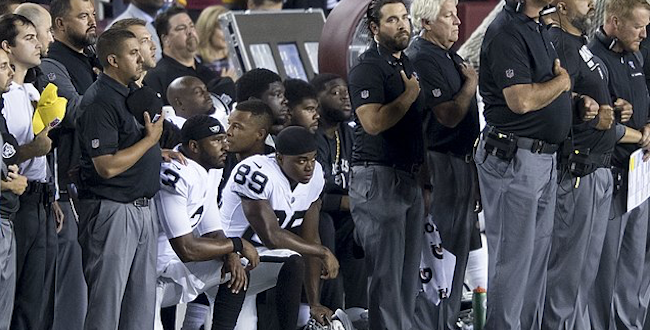 The reality of our false gods

Believe it or not, I am grateful for the brouhaha that is gripping America’s professional sports teams and leagues. Grateful because there is no longer any way to deny the reality that we are a divided nation.

I also am grateful because the dust-up reveals how professional sports in this country has become like a god to many people. Those with man-caves dedicated to their favorite sports team have created, in effect, an alternate church.

In one way or another, we all worship gods that allow us to escape from the reality of our world. And thus we hate it when someone reminds us that there is no escape from truth. We hate to be reminded of the reality of our faults, such as our biases, ridiculous opinions and impatience. That’s why fake news is so popular – because it “protects” its consumers from having to deal with reality.

I would be grateful beyond words if the entire pro sports system were to collapse because it has warped our understanding of who we are meant to be as human beings. And I may get my wish. Several online articles are openly saying that the backlash against these protests may undermine the financial empire that modern-day pro sports has become.

Our values are seriously out of whack when we idolize guys who crash into each other or hit a round ball with a round stick. One clear sign of this was the cover story in the Sept. 4 issue of Time magazine: “How Kid Sports Turned Pro,” with the subhead “Crazy Travel, Crazy Costs, Crazy Stress.” These kids, and/or their parents, aren’t just seeking to refine athletic skills. They seek to be worshiped. That is another appalling reality we would rather ignore.

If you doubt that we want children to become the gods we will someday worship, then look at what the FBI recently uncovered in college sports. I am ever so grateful that the FBI has revealed what journalists say “everybody” in the sports industry (including the media) has always known – that big money is being used to corrupt young athletes and a supposedly amateur sports system that is, in fact, totally oriented around money. Make no mistake, big-time college sports are professional grade, too.

When you erect false gods, don’t expect God to sit around and let it ride. He isn’t offended by what this says about Him because we’ve said even worse about him. But I’ll bet he’s ticked off by what we are saying to one another about the false gods we proclaim and worship, thus leading us away from the only source of true goodness, love, humility, joy, peace and forgiveness.

We made these false gods and we must pay the price for doing so. And better to pay now than pay later.

We will always make gods that distract us from the one true God – the God who wants us to confront the reality of who we are and the world in which we live. And that includes those who couldn’t care less about sports but who are busily making and promoting other false gods, whether it’s money, sex, power, race, the human intellect, or you name it.

What false god(s) do you worship? How’s that going for you?