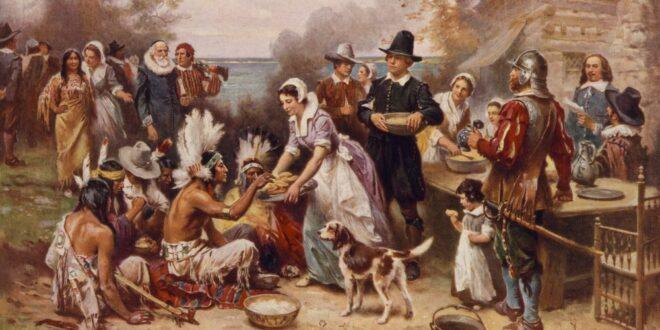 The term “First Thanksgiving” refers to the account of the 1621 event as given by the Plymouth Colony’s chroniclers William Bradford and Edward Winslow in Mourt’s Relation. Painting by JLG Ferris, 1932 (Library of Congress)

Images of Pilgrims in conical hats eating turkey with Native Americans wearing feathers encapsulates the myth of the first Thanksgiving.

Few images can be further from the truth.

Today’s Thanksgiving is an image based on a lie; a falsehood made to soften history.

Reality is the first Thanksgiving was not held in November 1620 as legend states, it was in October 1621. While there may have been prayers given in the first gathering, the first religious Thanksgiving was four years later as the Massachusetts colonizers gave thanks for rain after a two-month drought, Indigenous people were not invited.

National Geographic said the Wampanoag (part of the Algonquin) had lived in the Massachusetts area for 12,000 years and had been visited by other settlers before the Pilgrims or Puritans arrived in late 1620.

That first gathering in 1621 was a feast indicating an agreement between the Algonquin, led by Albenaki Tribal leaders Samoset and Tisquantum to assist the Pilgrims. Records by the Pilgrims show that during the toasts, the Indigenous people were not recognized for their part in helping the settlers. The agreement did not last a generation.

What followed in the years afterward was nothing less than a collision of cultures, a clash between how Europeans viewed the world and how Indigenous people view the world. Land was a major issue: to settlers, it was to be owned; to tribes, it is their identity.

In 1970, the 350th anniversary of the Pilgrim landing, Wampanoag tribal member Frank James of the Aquinnah (Gay Head) was asked to give a speech by then-Massachusetts Gov. Frank Sargent. The speech was censored because James dared to speak the truth about history. He compared white culture and Native culture, how one conquered and pillaged and the other was enslaved or forced to abandon their homelands.

“We, the Wampanoag, welcomed you, the white man with open arms, little knowing that it was the beginning of the end,” James, who died in 2001, wrote. “That before 50 years were to pass, the Wampanoag would no longer be a free people.”

In the mid-20th century, Indigenous people were just getting some of the civil rights already afforded to other minority groups, including the right to vote through the Indian Civil Rights Act of 1968.

Since 1970, many Indigenous people do not celebrate Thanksgiving; rather they hold a National Day of Mourning to remember what really happened. The day now recalls ancestors, but also focuses on a wider range of issues, including the environment and climate change.

So why the myth of the first Thanksgiving? Perhaps it was a bloodless way of bringing English settlers into the history of the Americas. It is known when Abraham Lincoln created the first federal Thanksgiving holiday in 1863, he did not mention the Pilgrims. Lincoln used the occasion to unify the country during the Civil War.

Images of happy Pilgrims and Natives did not arrive until after World War I to help elementary school children understand the settlement of English people in America. Real history is much harsher.

There were several “Thanksgiving” events celebrated between 1621 and 1863. Perhaps the most disturbing was in 1637 when Massachusetts Governor John Winthrop proclaimed a day of thanksgiving after a band of heavily armed hunters returned from what is now Mystic, Connecticut. There, hunters massacred 700 Pequot tribal members, an event long forgotten in the annals of American history.

This is why all history should be taught – not just the often-sanitized version created by the winners. True history must be known so we can understand the real differences on which this country was built.

Previous Sacred Texts: The Scriptural Basis of Christian Science
Next What Thanksgiving Day Means to Me, a Muslim Woman in America