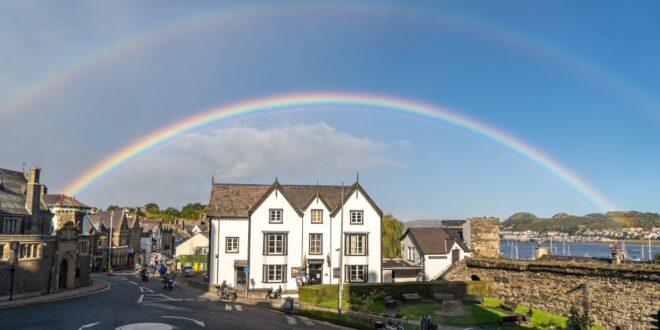 Double rainbow viewed from walled town of Conwy in northwest Wales, with Deganwy Castle ruins in the right background (twin mounds) and the remains of Conwy town walls in the right foreground, including the tower / Photo by Dan Haug (Contributed)

Navigating the rainbow: A metaphor for aging

Navigating the rainbow: A metaphor for aging

The rainbow’s mystical, multicolored arc-in-the-sky invites its use as symbol. “Why are there so many songs about rainbows,” Kermit sings. “It’s probably magic.” The beauty of this natural arch of light touches our hearts.

The rainbow has captured human imagination for millennia. The Bible presents it as the sign of God’s covenant with humankind, his promise never to leave man alone. Genesis 9:13 records the original covenant: “I set my rainbow in the cloud, and it shall be for the sign of the covenant between me and the earth.” Despite humanity’s failures to uphold its part, history records innumerable events apparently fulfilling God’s promise.

One example, Baha’is believe, is the periodic renewals of his message through manifestations of God. These appear in the Old Testament as lesser prophets. In the New Testament, Jesus confirms these and fulfills many traditional prophecies. The Quran further validates earlier prophets, retelling Biblical stories while launching Muhammad’s revelation. Evidence in these and other holy books can be found pointing to the latest Manifestation of God, Baha’u’llah.

A metaphor for aging

Besides symbolizing God’s eternal promise, the rainbow’s physical and spiritual beauty can be viewed as a metaphor for how we humans age. As we go through life, we admire rainbows from afar, pure light scattering myriad hues through crystal prisms of raindrops. The naked eye detects only bright colors, distinct yet inseparable.

Aging is inevitable. How we navigate that radiant arc from birth to death is largely our choice. At 86, I’m well on my way along the arc at speeds gradually increasing. I’m experiencing macular degeneration and other age-related ailments on the downhill slope of that arc. I’m losing eyesight, but not, I hope, my vision. While reading, struggling with tiny punctuation marks, I’ve identified a new malady I call “visual menopause.” I keep missing periods.

Adapting to the inevitable

As children, we adapt to bodies and minds changing faster than the world around us. Adults find the middle up/down slopes more gradual, until aging speeds things up. On the downslide, bodies and minds deteriorate faster than the world we thought we knew. That world, too, changes continuously, yet we adjust, adapt and function, often subconsciously.

During my childhood, telephones had no dial. We picked up the receiver and waited for a woman to ask, “Number please?” Today, my smartphone lets me view breaking news anywhere on Earth. My wife’s parents saw the first telephone and automobile in their village. They also watched man’s first steps on the moon — live.

From birth we’re bombarded with strange inputs. New sensations present themselves as soon as we pop out. Sensory organs adapt to a barrage of incoming information different from what we experienced in the womb. We adjust, blinking for the first time at light, hearing different sounds, feeling, smelling and tasting. Our brains kick in and prompt our bodies to cry, shiver, burp and poop, and otherwise respond to an unfamiliar environment.

We adapt constantly throughout infancy, childhood and adulthood. Our genetic makeup, and how it’s nurtured, determines what we are and who we will become. Nurture becomes increasingly important throughout our lives. We rely on healthy nourishment to feed our genetic potential. Dietary deficiencies, for example, can impede progress toward that potential.

Beginning with family, environment plays an increasingly important role. We learn new skills: social interactions, reading, gadgetry — all become second nature. But in midlife, we no longer can do many things we did during those developmental decades. As we age, caution increases. Jogging becomes brisk walking becomes strolling. We avoid ice, snow, darkness and excessive speed. Arms shorten as we reach to read a menu, before surrendering to glasses.

Yet each of us can think of someone in worse shape than we. We’re grateful to be able to adapt. We appreciate what we can still do as we take stock of where we are along that multihued arc. We adjust and envision possibilities we’ve never considered, such as sitting while pulling on sox. We learn to double-check when we put something down, so we won’t forget where it is.

Things we took for granted now challenge us. I carry a flashlight to help me read, to locate things I’ve dropped or to guide me down dim stairwells. Standing up too quickly sometimes creates momentary dizziness, all signs of slipping along the rainbow’s downhill side.

Yet the arc’s mystical magic, the multihued beauty of this natural phenomenon, touches our hearts and souls. In many cultures rainbows symbolize faith, love, vision, hope, peace, serenity and other positive yearnings. And what about the pot of gold at each end? We’ll never reach either because the rainbow changes as we move toward it. Let those treasures complete our metaphor: at either end a birth, first into this world and lastly, into life eternal.

Previous Should Christians Listen to Secular Music?
Next Irving, Ye and Growing Anti-Semitism