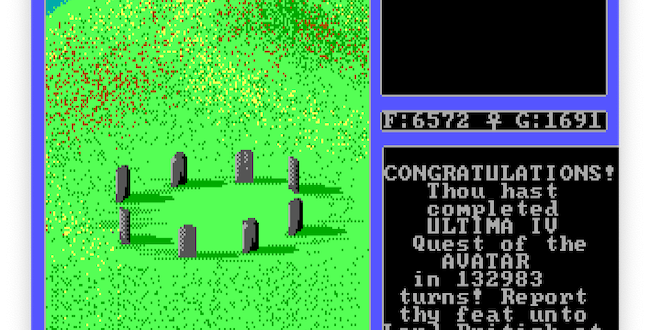 The Quest is Done

A little while before Christmas, I completed a video game that I started playing in 1985.

Ultima IV came out just before I turned 13. It was a game that drew on Tolkien and King Arthur, that invited you to engage in an epic quest across a wondrous world. And my best friend Owen and I spent a whole lot of happy afternoons puzzling through its world of adventure, fantasy, and heroism.

But we got stumped at the game’s very end and we never completed it.

A while back, I discovered that someone had made an emulator that lets you run Ultima IV on a Mac. No Commodore 64, no cathode-ray tube required. And so I started playing again.

It was a strange and kind of beautiful experience.

So much changes in 33 years. And it is awesome in the old-school sense of the word to encounter something – a photograph, a building, a video game – that has changed not at all. In Ultima IV, it is always the fall of 1985 and I am freshly begun Grade Eight.

It’s not just nostalgia that has left me with big feelings after playing this game again. (Although, my God, there is nostalgia. The room in Owen’s house in which he and I played in the heat and then the drizzle of those fall afternoons is so, so close. And like a train or a bus that pulls away just as you reach the station, it is too far away to touch. Gone.) Nor is it just nostalgia that makes me say that the game has aged well. Playing Ultima IV once more was not at all like that deflating experience of seeing a movie that you loved as a kid and that, as a grown up, you now discover is a turkey. Rather, it was like returning to a cherished story and hearing it again for the first time.

In a funny way, the clunky graphics of 1985 help with that. Ultima IV came out when photorealism on a computer screen was a pipe dream. And so the game leans hard into your imagination. It exists as much inside of you as it does in the pixels on the screen.

Earlier this month, some 33 years after I begun, I completed the game. Its quest is done. And I am left with a feeling that I can’t quite name, a mix of joy and satisfaction and melancholy. Owen and I at age 13 recede once more, we close the door on the room in his house with its boxy, grey, state of the art 1985 computer. Our quest is finished, at least for now.

Previous Composting may offer the latest option in green burials
Next Ask A Catholic: Is Purgatory Mentioned in the Bible?