Home / Commentary / The Problem With Tolerance 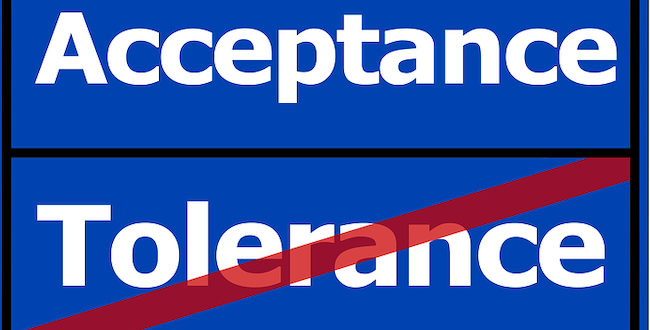 The Problem With Tolerance

Recently I was chatting with a friend when the silly question came up, “If you had to wear one T-shirt for a whole year with only one word on it, what would it say?”

After thinking about it, my friend responded, “Tolerance.”

That word is a trigger for me, which is too bad because we see it is everywhere. Progressive churches boast they are tolerant of the LGBT community. We see #tolerance used on social media to celebrate diversity. Educators say it proudly when describing their culturally rich classrooms or curriculum.

And I get it. There’s good intention behind it.

The assumption is that it means respect, compassion, embrace. Those are good things.

But to me, tolerance has a different connotation. It means to put up with something. It’s biting your tongue when the person behind you at the movies keeps talking, or when a child throws a loud tantrum at a fancy restaurant.

I don’t ever want to be tolerated; I want to be accepted. Who doesn’t?

An open and affirming church shouldn’t put up with queer people, they should love them. How about #acceptance instead of #tolerance?

The word always bothered me, but I didn’t realize why or how much until I first moved here and took a trip to Portland.

My parents were driving through Oregon and asked me to come meet them. I was hesitant because our conversations seemed to always turn into arguments about religion.

And it did once again. This time because I went to Powell’s Books and bought the book “Living Buddha, Living Christ,” by Thich Nhat Hanh (a text I highly recommend).

My stepdad ripped the book from my hand, in the middle of the street, exclaiming, “Jesus and Buddha are not the same!”

I tried to explain that the book wasn’t saying Christianity and Buddhism are the same, but instead examined how both religious figures can teach us about peace, love and compassion. But this only angered my stepdad.

Trying to calm the waters, my mom suggested we all go to lunch.

However, at the restaurant, the conversation continued to spiral. Studying other belief systems was both dangerous and wrong, they said. In fact, they continued, they didn’t even feel obligated to tolerate other religions. They used Islam as an example, spewing out incorrect information about Prophet Muhammad, the Quran and Muslim beliefs.

I could feel anger and frustration welling up in me. This is exactly why we need religious literacy, I thought.

How could they think this way when we all live in a society that’s home to so many different traditions? How fractious. How dogmatic.

Finally I blurted out, “You’re right, you don’t have to tolerate them. You need to accept them because you live in community together.”

Other than a funeral a couple of years ago, that was the last time I saw my parents.

My attitude of curiosity and embrace became intolerable.

Of course that’s a painful reality. But I can’t stand for their views either and need to continue to push for understanding and acceptance in this world. My hope is that one day it will include them.

After I spewed all this out to my friend, it was my turn to answer the question. What word would I wear on a T-shirt for a year? Empathy, I said. I think finding affinity for the other is the first step toward acceptance.

I’m curious, dear readers: What would your word be?

When we walk the halls of a hospital – An Integrative Personal Story, Part 6

Each day, as I got out of my bed, I found myself walking the halls of the University of Washington Hospital, hooked up to life-sustaining IVs. As I passed by opened doors, anything but oblivious, I gazed into the rooms of perfect strangers. Each was on their own journey of crisis, some getting better, others, not so.