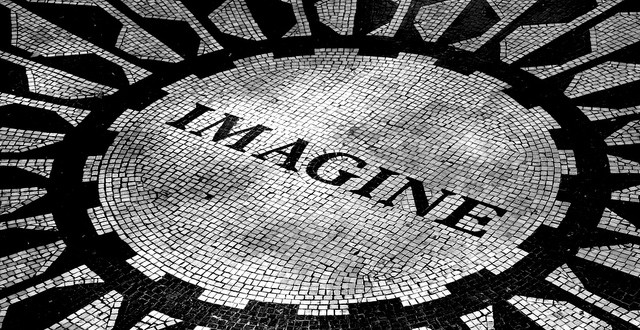 The Power of Spiritual Imagining

f once heard about a person who for her entire life saw only in two dimensions. Then, by awaking her imagination and through the help of a development doctor, she was able to create seeing in three dimensions. Early on, her brain learned to ignore her eye, but when she unleashed the power to imagine seeing out of it, she was able to reanimate her blind eye.  It was fascinating to me, because I, too, can only see in two dimensions because of my blind eye. I have had to imagine what it means to see in three.

What fascinated me the most, though, comes from meditating on the power of imagination. We are now imagination poor with all of our high tech movies. We don’t have to imagine a hurricane or a war, Hollywood can do it for us. Special effects can make a man fly, a space ship go past the speed of light, but it cripples us when it comes to a constructive use of imagination. Few of us imagine what it must be like to be poor in this country. So from this lack of imagination comes a lack of compassion. We think them lazy, because to a mind lacking the ability to soar into another’s place, it makes most sense. We need to rekindle our ability to soar.

Hollywood imagination is used to drive us away from reality. We are taken to different worlds filled with superheroes and aliens and ghosts and cartoons, but seldom do we use it to drive us toward loving our neighbors.

The true power of imagination is it can be used to drive us toward reality and others. Jesus’ command about treating others as you would have them treat you is an ethic based on imagination. I have to imagine what it is like for the other in order to act. I imagined what it would be like to receive a call for someone asking for payment when I worked in billing. It helped me in how I performed my job. When I imagine what it must be like to be African American facing the barrel of a young man’s gun, I can start to get the pain. Then, when I hear of the family’s forgiveness, I understand the power of the gospel. When I imagine a poor Jew being executed by a powerful authority like Rome, I understand the power of Jesus.

Imagination is a skill that needs to always be exercised, or like under-worked muscles, it atrophies. It is a spiritual discipline to imagine the life of God incarnate, Jesus. It transforms us.

Previous Council meeting a reminder that we need to confront racism in community
Next Father Knows Best: Life lessons from summer camp