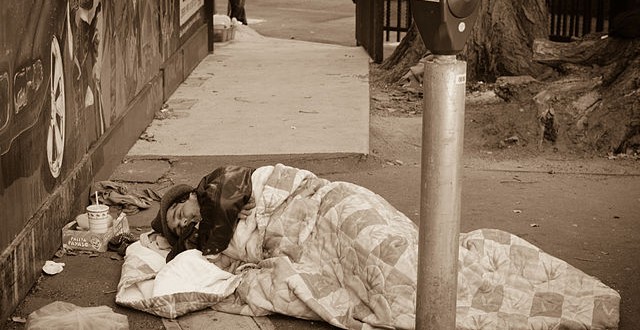 The Poor Pay the Price

Working with the poor, I often get my ass — with a side of middle-class blinders — handed to me on a platter. A year ago we surveyed low-income guests gathered at the free weekly dinner we offer at West Central Episcopal Mission. The question was “What resources do you find hard to get in West Central?” We offered them a list of middle-class assumptions about what poor people need: food, housing, medical care, etc. One of our guests checked “other” and wrote next to it “money.”

The poor may receive some resources — generally the stuff richer people don’t want — but they don’t have enough money. And while education and work skills might help a few claw their way into the working or middle class, the main reason poor people don’t have enough money is because other people have it. When we talk about the morality of money, the problem isn’t the money — it’s the concentration of resources and power in the hands of a very few at the expense of the many.

Wealth concentration takes root in spiritual emptiness. Jesus names this over and over. Stop building bigger barns for all your shit! Lilies, people, lilies! Guys . . . seriously . . . camel, needle. Serve God or serve money — pick one. In these moments, Jesus recognizes two major motivators for hoarding: greed and fear. Fear creates a spiritual distraction. It’s why I worry about my available credit when the refrigerator starts making a funny noise. Greed is a whole other bag of bobcats.

Greed — or, in its cocktail dress, avarice — is what my Roman Catholic friends call one of the really badass (deadly) sins. I was uncomfortable with the notion of sin because the church of my youth used it to beat me up. But eight years of working among the poor has redeemed “sin” for me. We’re all pretty damned good at sinning. And our collective sins keep them poor.

I long for an Acts 2 kind of community: All the believers continued together in close fellowship and shared their belongings with one another. They would sell their property and possessions, and distribute the money among all, according to what each one needed. Maybe I’m an idealist, or a socialist, or whatever you want to call me, but I’m also a pragmatist. As long as humans are involved, we will be prone to the sin of hoarding. Jesus named this, too. “The poor will always be with us,” he told the exasperated Judas. Jesus isn’t shrugging his shoulders, saying “Eh? Waddya gonna do?” He’s being real about the dynamics of wealth and power. The poor may always be with us, but the rest of the Gospel tells us there doesn’t need to be so damned many.

Those who have the money won’t give it up willingly. In fact, the rich need the poor to make even more money. Big banks profit by issuing the “debit cards” that hold SNAP benefits (Supplemental Nutrition Assistance Program — or food stamps) and payments to plasma donors. SNAP benefits agribusiness —that’s why it’s in the Farm Bill. Even more disturbing, those profiting from the poor don’t bother to hide it. Maybe they think no one will give a shit because, well, these are poor people.

I find hope in cultivating the resources existing in a neighborhood. Grantmakers often want to fund “economic development” without realizing highly developed economies already exist in poor neighborhoods. Give a cigarette to person A today, I’ll get a cigarette from person A tomorrow. There is constant bartering, and the trades are generally equitable. (A neighborhood is like a small town — you won’t survive long if you piss people off.) Witness the price-fixing conversations around certain products, and you’ll discover not only a deep understanding of economics, but a business savvy to rival OPEC.

Economist Manfred Max-Neef notes, “[Among the poor] there are networks of cooperation, mutual aid, all sorts of extraordinary things, which you no longer find in our dominant society. . . which is individualistic, greedy, egotistical, etc.” I’m less interested in hitching a poor neighborhood’s star to the wobbly and morally corrupt wagon of the mainstream economy and more interested in expanding existing neighborhood economies to build capacity and stability. That said, we still need Robin Hoods who know how to liberate money from the hoarders to invest in these alter-economies.

This work-around doesn’t let the middle and upper classes off the hook. That many of us self-medicate with expensive wine and shopping sprees while we judge others’ purchase of illegal drugs, that many of us keep trying to buy happiness while our brothers and sisters live in garages and sell their plasma to buy food, that the residents of West Central have an average lifespan ten years shorter than the residents on the upper South Hill — this is a moral bankruptcy, one perpetrated on us by those who want us to keep consuming, consuming, consuming, without asking ourselves what we are really trying to buy. We are all victims of an economy gone terribly wrong, but the poor pay an unacceptable price.

The Rev. Kris Christensen is an Episcopal priest and the executive director of West Central Episcopal Mission, a ministry of the Episcopal Diocese of Spokane.