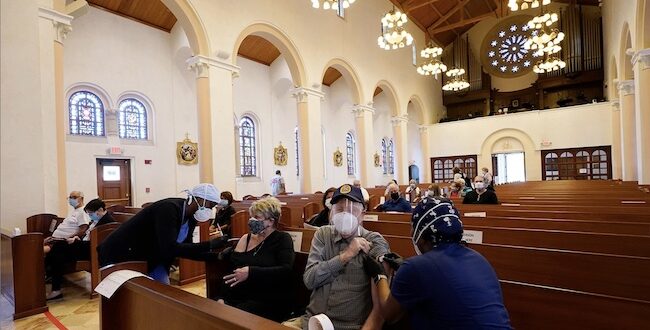 The path to herd immunity runs through America’s faith communities

The path to herd immunity runs through America’s faith communities

Science, supply chains and good government policy have brought us to a remarkable point in the battle against the virus: Any adult who wants a vaccine can now get one.

The principal challenge from here is not scientific or logistical but cultural — addressing hesitancy among the large number of Americans who remain skeptical about the vaccine. Already there are reports of public health officials looking to offload excess vaccine supply. Even as the rates of those receiving at least one vaccine have risen to 44% nationally, a number of states in the Deep South have plateaued at around one-third. In places like Mississippi, for example, where vaccination rates are just 31%, there are more than 73,000 doses that haven’t found arms.

A new study conducted by the Public Religion Research Institute (PRRI) in partnership with Interfaith Youth Core (IFYC), organizations we each run, illuminates a promising path forward: engage religious communities. Residents of many of the most vaccine-hesitant areas in the United States turn out to be remarkably receptive to faith-based interventions.

Despite their current reticence, nearly half (47%) of churchgoing white Evangelicals, and approximately one-third of Black and Hispanic Protestants who are vaccine hesitant, say a faith-based vaccine approach would encourage them to get the shot.

What would this look like? None of the interventions are especially complicated. They include knowing that their pastor or other members received the vaccine, attending an information session about the vaccine at their church, getting assistance with a vaccine appointment from a congregation or having a congregation serve as a vaccination site. (A terrific way for faith groups to learn how to get involved is to attend the online Faiths4Vaccines National Summit happening on May 26.)

And the appeal of these faith-based approaches is not just relegated to religious groups. Twenty-six percent of all vaccine-hesitant Americans, including 44% of all churchgoing vaccine-hesitant Americans, say at least one of these faith-based approaches would inspire them to get vaccinated. Similarly, among what are emerging as the most vaccine-hesitant populations — Republicans, rural Americans and younger Americans under the age of 50 — approximately one-quarter of those who are currently hesitant say these religious appeals would make them more likely to get vaccinated.

For all the talk about the decline of religion in the United States, it turns out faith communities nonetheless retain a fair amount of social trust in critical places and with groups that are behind the vaccination curve.

To be sure, leaders in some faith communities have already been doing their part. There are many encouraging stories of Black pastors hosting vaccination clinics in their churches. And we can actually see the impact of these efforts in the data. African American Protestants who attend religious services frequently are 16 percentage points more likely than those who seldom or never attend to be vaccine acceptant. But it’s clear there is important work to do in other communities. For example, the opposite is true in white evangelical communities, where those who attend churches more frequently are actually less likely to get vaccinated.

At this strategic turning point, the governmental, philanthropic and public health sectors ought to proactively seek the counsel and partnership of faith leaders. Cities and towns all over the country should seek to develop partnerships with local congregations and initiate public health ambassador programs to arm community members with both vaccine facts and cultural skills to engage a diverse range of racial and religious identities. IFYC has created one model of this, for example, called the Faith in the Vaccine Ambassadors program.

Given the way mask-wearing and vaccine acceptance have become fronts in the culture wars, it may be tempting for some to write off hesitant communities. But we believe this moment can be an opportunity to remember the democratic principle — and the public health reality — that we are intimately connected, that the many are also one. Progress in Mississippi advances health outcomes in Manhattan, and resistance in Louisiana threatens citizens’ wellbeing in Los Angeles.

The data suggests engaging religious communities in response to this crisis may provide a bridge connecting segments of our society that often have little to do with one another. Black Protestants and white evangelicals, Latinos and rural Republicans — groups who have divergent voting patterns and political identities — actually have a lot in common when it comes to who they trust about the vaccine.

Democracy requires a basic level of empathy and willingness to cooperate on some fundamental things, even as we disagree on others. What could be more fundamental than our health, safety and shared desire for the freedom to return to our normal lives?

The medical community tells us we need to get to a minimum vaccination rate of approximately 80% to reach herd immunity. But getting anywhere near that goal will require crossing not one but many finish lines, particularly with more vaccine-hesitant communities. The challenge from this point forward will be to develop a robust ground game, marshaling the best of our cultural resources to vaccinate a few hundred more in this neighborhood, a few thousand more in that town. And in that effort, the paths to success likely run through our local congregations.

(Robert P. Jones is the CEO and founder of Public Religion Research Institute (PRRI). Eboo Patel is the president and founder of Interfaith Youth Core (IFYC). The views expressed in this commentary do not necessarily reflect those of Religion News Service.)

Previous Who Was The Bab? Why It Matters.
Next Trouble for American Jews