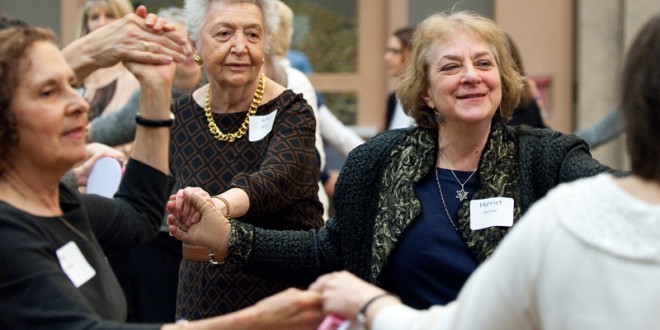 The Passover seder, designed by and for women

BETHESDA, Md. (RNS)  On the first night of Passover, Jews ask aloud, “Why is this night different from all other nights?”

For a group of 150-plus women gathered Sunday (March 22) at Congregation Beth El north of Washington, D.C., that traditional question was followed by an alternative:  “Why is this seder different from other seders?”

Answer: “At other seders, men traditionally lead the service. At this seder, women are the leaders.”

Women’s seders are not new. The women who gathered at Beth El on Sunday, 12 days before the holiday begins on April 3, have been at it for 19 years. These seders began, in or near cities with substantial Jewish populations, about a generation ago, when fewer women played leading roles in synagogues and other institutions of Jewish life.

Today, women in the Conservative, Reform and Reconstructionist movements of Judaism in the U.S., which account for about 90 percent of synagogue-affiliated Jews, lead congregations as rabbis, cantors and synagogue presidents. Still, women’s seders proliferate, and each year, their guest lists grow.

“Now we are all those things that we weren’t before,” said Janet Mayer, who helped organize a women’s seder in Raleigh, N.C., this year, a joint effort of a group of local synagogues and Jewish organizations. “So why are we still doing this? Because there are so many places where women don’t have freedom and rights.”

More than 100 women attended the Raleigh women’s seder this year, up from 80 women two years ago.

“Seder” in Hebrew means “order,” and each seder follows the ritual of the Passover meal laid out in a haggadah, a booklet given to each participant at the table.  The book recounts the story of the Israelites’ liberation from Egypt through the mighty acts of God. Typically, women who organize women’s seders write their own haggadahs for the occasion.

“For everything there is in a seder, we do it in terms of how it has impacted women, how it has reflected on women’s lives,” said Hillary Selvin, executive director of the Los Angeles branch of the National Council of Jewish Women, which will host a women’s seder on April 8 for about 120 women, roughly double the number who attended five years ago.

For example, the 10  plagues visited on the Egyptians in the Book of Exodus — recited at every traditional seder — will be modified at the NCJW-LA’s seder. Blood is the first plague “so we talk about the blood shed through illegal abortions and other violence against women,” said Selvin.

The spotlight at most women’s seder falls on Moses and Aaron’s sister, Miriam, who plays a decidedly minor role in the traditional telling of the Passover story. At Beth El, women take frequent breaks from the meal and head to the dance floor with plastic tambourines, recalling Miriam’s timbrel and how she danced when God delivered the Israelites through the parted Red Sea. (Exodus 15:20)

“This is a story, if you go deeper, that involves the courage and bravery of a lot of women,” said Rabbi Esther Lederman, a rabbi at Temple Micah, a Reform synagogue in Washington, D.C.

“I didn’t learn those stories growing up because it was really about Moses and God, and I think there are beautiful lessons in those stories about women as well.”

Can men come to these seders?

Of the more than 100 people who attend Micah’s women’s seder, many will be men. But typically, men don’t sign up for women’s seders, though none of the seder organizers interviewed for this story said they would turn men away.

In the home, Passover seders are coed affairs — traditionally led by men, though this is changing — with the extended family sitting around the table for a meal, prayer and songs that continue well into the night. Most other women’s seders are held days before the start of Passover, or after the first night of the holiday, so as not to compete with family seders.

Still, said Mayer, co-organizer of the growing women’s seder in Raleigh, a lone protester every year writes a letter to her congregation’s senior rabbi, arguing that seders are family events, not women’s affairs.

Previous Conservatives ask: Is God’s judgment coming soon?
Next Choose: The God of Love, or the God of Success?