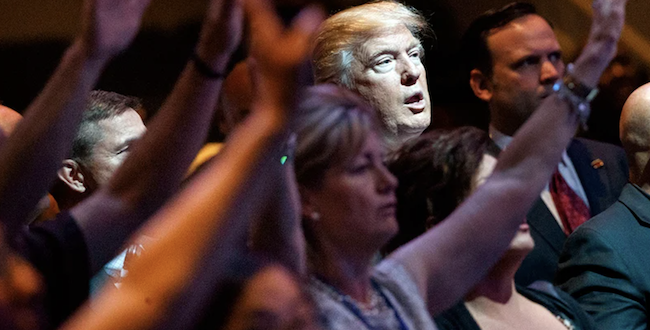 So it turns out that Donald Trump is no longer a Presbyterian. In response to a set of questions from Religion News Service that were put before him by his spiritual mediatrix Paula White, Trump says he now considers himself “a non-denominational Christian.”

At the time, it possessed just the kind of white European spirit-of-capitalism religiosity calculated to appeal to Fred Trump of Queens. Now it’s just another one of those shrinking mainline Protestant operations, increasingly populated by POCs and immigrants from you-know-what-kind-of-hole countries.

Shortly before his own inauguration, Trump received two local Presbyterian worthies in his Trump Tower office, one the Black senior pastor of the First Presbyterian Church of Jamaica, New York, where he was confirmed in 1959. When the president-elect bragged that he had done very well with evangelicals in the election, the two allowed as how neither of them were evangelicals.

As recounted by MJ Lee in the CNN magazine State, the rest of the encounter went like this:

“Well, what are you then?” Trump asked.

They explained they were mainline Protestants, the same Christian tradition in which Trump, a self-described Presbyterian, was raised and claims membership. Like many mainline pastors, they told the President-elect, they lead diverse congregations.

Trump nodded along, then posed another question to the two men: “But you’re all Christians?”

Point is, what Trump recognizes as the standard religious brand for Republicans these days is evangelicalism. But, as evangelical leaders and White House advisers like the Rev. Paula White will tell you, “evangelical” is not an actual brand name for, well, evangelicals. (The only major denomination with the word in it is the Evangelical Lutheran Church in America — a charter member of the Protestant mainline.)

Given that, here’s how I imagine the conversation between White and the president that yielded Trump’s answer went:

“I don’t feel like I’m a Presbyterian any more, Paula. So how should I brand myself, religionwise?”

“Well, Mr. President, the big churches you like to visit, like mine or the International Church of Las Vegas that feted you last weekend, they’re nondenominational. Folks who belong to them just tend to call themselves Christians. You can brand yourself as a nondenominational Christian.”

Not to brag or anything, but I always figured  Trump for nondenominational. The Church of Trump, like so many other megachurches, is way too big, too self-important, too much of a thing unto itself to be subordinated to the bureaucrats of some deep denominational state.

And as for the Christian part, well, as the pope says, who am I to judge?