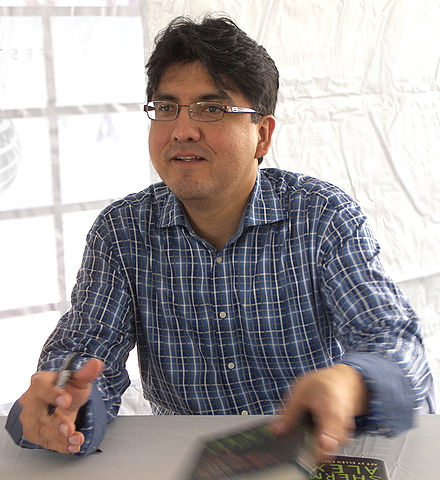 The most compelling vision

Sherman Alexie is a Spokane Indian who has become a poet, novelist and screenplay writer.  His first book, a collection of short stories entitled “The Lone Ranger and Tonto Fistfight in Heaven,” became the basis of the Miramax film “Smoke Signals,” one of my all-time favorite movies.  On my vacation I found the book in a shop in Dayton and discovered it is, if anything, more wonderful than the movie. It is a series of short stories featuring the same characters, told from a variety of perspectives.  It also contains many short, pithy statements, one of which has stuck with me so much that I want to share it here.

Ponder this for a moment.  “The reservation doesn't sing anymore but the songs still hang in the air.  Every molecule waits for a drumbeat; every element dreams lyrics.  Today I am walking between water: two-parts hydrogen, one-part oxygen, and the energy expelled is named Forgiveness” (emphasis in the original).

That is perhaps the most compelling vision of a life truly redeemed I have ever heard. There is something heartbreaking about the first line: “The reservation doesn't sing anymore.”  I can't read that line without thinking of Psalm 137  – By the rivers of Babylon, with its lament: “How shall we sing the Lord's song in a foreign land?”  But instead of ending with the horrifying sentiment of the psalm, Alexie evokes the image of forgiveness living in every molecule, generated by every breath.

Were we to summarize the meaning of the crucifixion, we could do no better than that. If we want to imagine what a truly Christ-like life looks like, that is it.  After everything that can be done has been done, what is left is the breath that is forgiveness.

Previous BRIEF: Preventing domestic violence
Next Ask A Mormon: Why do men and women become eligible for missions at different ages?