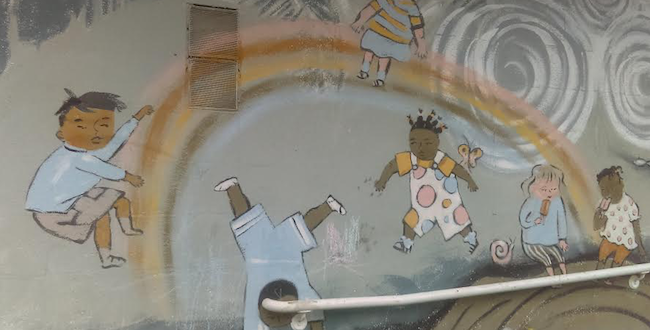 The MLK Center is vital to the Spokane community

After the Martin Luther King Junior Center was targeted with racist vandalism, the organization hosted an open house to show the community what they were all about. They are currently fundraising to tear down the old buildings and put in one new large building so they can accommodate  100-150 students, instead of the 40 students they now have sharing space with local elementary schools, according to Director Freda Gandy.

As I walked down the sidewalk to the MLK Center, I saw members of the National Association of Buffalo Soldiers and Troopers Motorcycle Club (N.A.B.S.T.M.C.) outside the front of the Center, letting happy children sit safely on their motorcycles. The N.A.B.S.T.M.C. educates people about the racism Buffalo Soldiers were challenged by. I thought they were there to show support for the Martin Luther King Jr, and they were, but more than that. After going inside the center, I found out from Gandy, the N.A.B.S.T.M.C. were there to deliver meals to families for Thanksgiving. They served more than 50 families in the Spokane area this year according to their Facebook page.  It’s obvious the children love the members of the N.A.B.S.T.M.C. from the looks of excitement and joy on their faces.

Inside the center that day, it was bright, cheerful, bustling with people doing good. Nachos were about to be served to the Buffalo Soldiers Motorcycle Club courtesy of donation by Qdoba, and coffee, by Starbucks. Teachers and staff members gave guided tours of the center. The walls of the school’s interior are adorned in primary colors, inspiring education and creativity.  Everything looks comfortable and fun and appealing.

There are families in need, who have children attending the center who received their Thanksgiving Dinner from the N.A.B.S.T.M.C.   I spoke briefly with one of the members, Curtis Bowe. He said it’s very important to the Buffalo Soldiers Motorcycle Club to take the dinners to where the families are, instead of having families stand in a line. The Buffalo Soldiers have been working with the MLK Center for over a decade delivering Thanksgiving Dinner to families in need.

“It’s about giving back to the community. When we drop of the dinners, what I love seeing is the reaction of the children,” Bowe said.

Since two of the families happened to be at the MLK Center that day, the Buffalo Soldiers Motorcycle Club brought the dinners to them right there.

I received a tour of the center from Candy Blackman, a teacher who started here at the Martin Luther King Junior Center’s program for teens in need over 17 years ago. Blackman is now in college to get her bachelor degree in teaching. She is married and has a daughter and a son now, herself. She explains her working mother was too poor to buy new school clothes for her sister and brother and herself. Enrolling in the program, and being successful in it, gave her a chance — and every teen who is in the program — individually a chance to earn up to $200. The program for teens, Blackman explained, teaches teens through a partnership with Numerica Credit Union Financial Literacy, as well as civic duty and community leadership skills. She showed me the various spaces for the pre-school, before and after school care, and the outside classroom as well, which is well-sheltered. Education is important here, and it’s a well-rounded education in every way, socializing children as well as teaching them their academic skills. One wall shows how the preschool is ahead of the curve, having a word wall, where children can put words they’d like to to learn, which Blackman informed me usually doesn’t start until kindergarten.

I thanked her for her tour, and finished talking to the Gandy. Giving Tuesday is about to commence, and she is hopeful people will remember the center, so they can upgrade and help more people in the community. Helping children and teens is what they do in one building. In the other building, they have programs for parent education, supervised visits, and much more. They are vital to the community. I asked Gandy if there were ways to contribute for people without money, such as volunteering. She said yes, they welcome volunteers to tutor the children after school. They will be looking for new tutors to start in January.

You can donate to the center through its website.  If you’d like to volunteer as a tutor or for further information regarding the Martin Luther King Jr. Center and its programs call 455-8722.

In parting, I asked Gandy how she feels the Martin Luther King Junior Center lives up tot he legacy of Dr. King.

“We provide a diverse environment for children. We accept everyone through our doors. Everyone knows they are welcome here.We treat everyone with respect and dignity. That’s what King wanted. That’s how we embody his legacy,” she said.