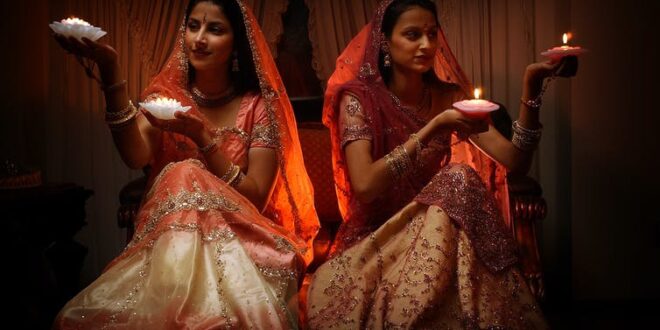 People shop for lanterns at a roadside stall ahead of Diwali, the Hindu festival of lights, in Mumbai, India, Saturday, Nov. 7, 2020. Diwali will be celebrated on Nov. 14. (AP Photo/Rafiq Maqbool)

As many Indian Americans celebrate the election of the first Black and South Asian woman, Kamala Harris, to the White House, many will also be celebrating the festival of Diwali on Saturday, Nov. 14.

Sometimes called the Indian festival of lights, Diwali is arguably the most important holiday of the year for South Asian families.

The festival, which is observed by Hindus, Sikhs and Jains, lasts five days in its entirety. Traditionally the third day is considered the most important. During this day, families gather to light candles, eat sweets and place lit lamps in their public-facing windows.

As a scholar of Asian religion and popular narratives, I’m interested in Diwali because it demonstrates how ancient tales in epics become part of religious practice.

There are many stories around what exactly Diwali commemorates and why it is celebrated.

Among Hindu families, many claim the festival celebrates the defeat of the evil demon king Ravana by Rama – an incarnation of the Hindu god Vishnu and the hero of India’s Ramayana epic. In the most famous part of this epic tale, Rama’s wife is abducted by the demon Ravana, and Rama must journey to the land of Lanka to save her with the assistance of his brother.

A different tradition states that the festival commemorates the defeat of the demon Narakasura by Lord Krishna. Like Rama, Krishna is an incarnation of the god Vishnu, who has come to assist humanity in its time of need.

Stories tell of Krishna’s efforts to rid the world of demons. In this particular story, the King Naraka gains extraordinary abilities through a deal with a demon and becomes intoxicated with power.

Narakasura, as he is now called, destroys the kingdoms around him and eventually plans to assault even the heavens. Krishna appears and uses his divine powers to neutralize Narakasura’s weapons, eventually beheading him with a multi-pronged discus.

Other traditions associate the festival with the birth of the goddess Lakshmi and her marriage to Vishnu. In the Hindu tradition, Lakshmi is worshipped as the goddess of wealth, while Vishnu is seen as the preserver of humanity.

While there are many stories of her birth, the most prevalent is that Lakshmi appeared during the churning of the divine ocean of milk from which the nectar of immortality comes during a fight between the gods and demons. After appearing, she chooses to marry Vishnu and to assist him in working for the benefit of humanity.

In southern India, Hindu families commemorate the defeat of the demon Hiranyakshipu by Narasimha, the lion-headed incarnation of Vishnu. Like many Indian stories, Hiranyakshipu is a demi-god who believes he is immortal after receiving a divine blessing from the Hindu creator-god Brahma that lists the conditions for his death.

According to the boon, he cannot be killed at day or at night, inside or outside, by human or by animal, by projectile weapons or by hand weapons, and neither on the ground nor in the sky.

In response to Hiranyakshipu’s terrorizing of the heavens and Earth, Vishnu then incarnates as the lion-headed god Narasimha to kill the demon. He kills him at dusk, on the step of his house, as a chimeric lion with his claws as he lies on Narasimha’s lap – all conditions that satisfy the elements of the boon.

Stories from other religions

The Diwali tradition is celebrated by Jains and Sikhs as well, who have their own interpretations of the festival. For Jains, Diwali celebrates the nirvana, or enlightenment, of Mahavira, the 24th spiritual teacher of the Jain path and the contemporary tradition’s founder.

Sikhs consider Diwali a commemoration of the release of Guru Hargobind, the sixth of 10 spiritual leaders, and 52 other men who were imprisoned by the Mughal Empire that ruled the Indian subcontinent from 1526 to 1857.

After the public execution of his father by Mughal leaders, Guru Hargobind became increasingly passionate about forming an independent Sikh homeland through military action if necessary. He was eventually jailed by the Mughal Emperor Jahangir, but was released two years later on the day of Diwali.

Popular legends state that when he was freed, Guru Hargobind tricked the Mughal emperor into allowing him to bring out as many men as could hold onto the hem of his cloak and, in this way, helped release 52 other prisoners who held onto 52 threads coming off of his garment.

The multiplicity of interpretations for why Diwali is celebrated and questions regarding the festival’s exact origins may have one potential answer: that the narrative of origins is an afterthought to rituals.

This problem is illustrated in a well-known episode of the sitcom “The Office,” where the Dunder Mifflin team attends a Diwali celebration at a local Hindu temple. Before they go, they ask Kelly – the Hindu office worker who is playing hostess – to explain the origins of the festival.

She demurs, stating “I don’t know; it’s really old, I think,” before excitedly discussing the beautiful clothes everyone wears, the dancing and the food. Mindy Kaling, who plays Kelly and wrote the episode, explained that she based Kelly’s cluelessness on her own, noting that – despite identifying as Hindu – she had to do significant research into her own religious tradition to write the episode.

In other words, while she was aware of and excited about the rituals, the narrative explanation was secondary to joining with her community in celebration.

But this does not mean that narrative may be inconsequential. It is important to think what these multiple narratives about Diwali’s origins may be able to tell us about the Indian culture.

Asian religions scholar Robert Ford Campany suggests that narratives entail a subtle form of argument that “reveal, argue, or assume something significant about the world, about spirits, about relations between humans and other beings, or about the afterlife and the dead.”

Perhaps these diverse origin stories of Diwali point to a shared argument that Indian culture is making about the world: that good – whether as one of the many avatars of Lord Vishnu, an enlightened Jain prince, or an imprisoned guru – will necessarily triumph over the evils of demons, injustice and ignorance.

Certainly that’s an argument worth celebrating, especially in the chaotic times we live in today.