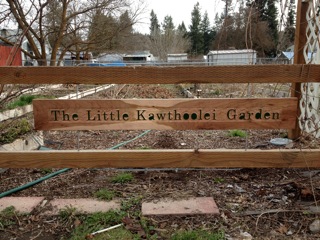 Community gardens are becoming practical ways to cultivate a more healthy neighborhood and foster opportunities to build more relationships within the community they are planted within.

Three years ago, Jacob’s Well started a garden and this year looks like it’s going to be even more fruitful than it has been. We named the garden after the traditional word of the Karen people’s homeland in Burma. Kawthoolei means “land without evil” in one of the dialects of the the Karen language. We felt like it captures our prayer for East Central too. We have been working and worshipping with Karen people since 2006 when we began a journey into refugee resettlement ministry through World Relief.

As the years have rolled on and ‘refugees’ have become people with names, rather than titles of political and transitional designations, we’ve seen projects arise reflecting the growing community in our neighborhood and the love for other people’s stories becoming our own.Three years ago, we resurrected an unused backyard donated by a generous landlord for our church to use as a garden. With a lot of hard work and donations from church members, we have slowly seen this small part of East Central begin to produce good food and nurture a stronger sense of community as we work together in the garden.

Last fall we were able to harvest and produce grape jelly from a grape vine that we nurtured into health. It used to be a scraggly, almost dead vine on a metal fence, but with love, care and patience, it has flourished and is now bearing all kinds of goodness. We see it as a prophetic picture of what God is doing in the lives of people living in East Central.

Last year, we started gathering our neighbors and international friends in the neighborhood to join us in the garden. It was beautiful to see Asian, Micronesian, Cuban, African and Americans working together among vegetables, fruit and flowers. This project has truly become the the means for seeing a little better life, grow up among us in the neighborhood. I look forward to warm summer months when I can sit in the shaded garden, eating some raspberries and taste the words of Jeremiah in my hands, “This is what the LORD Almighty, the God of Israel, says…“Build houses and settle down; plant gardens and eat what they produce…Also, seek the peace and prosperity of the city to which I have carried you into exile. Pray to the LORD for it, because if it prospers, you too will prosper” (Jeremiah 29:4-7).