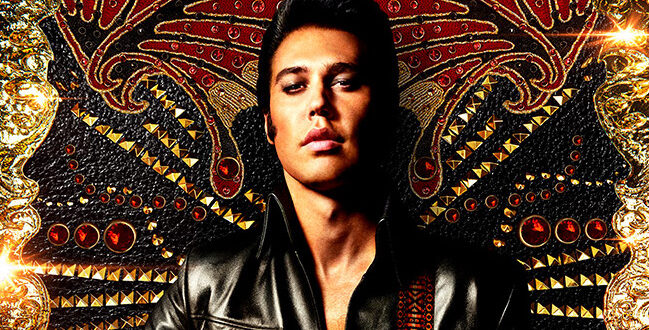 The King and Cultural Appropriation    

The King and Cultural Appropriation

And yet I have been living with him since I met my dear Carla.

Carla is an Elvis fan, make that fanatic. She saw him in concert twice in Spokane. She edited a book of photos taken by her good friend, who was also a friend of Elvis and his wife, Priscilla.

She has a picture of Elvis on her bedside table (my pictures are on a nearby dresser). And Elvis is her screen saver on phone and computer. I am in both…somewhere. And my home office is really an Elvis room – memorabilia, posters, and every possible CD and DVD.

If you do not know already, there is a blockbuster movie this summer, “Elvis,” produced and directed by the legendary Baz Luhrman, so you just know it is big, splashy, sometimes over the top, but also immensely entertaining.

I have been living with that movie for two years as dear Carla provided me with almost daily updates on its production. We went to see a special fan preview June 21. As predicted, it was great fun, transcendent in parts, and featuring an amazing performance by Austin Butler as Elvis.

It was also enlightening. That last is important because some of the issues raised by Presley’s life, particularly his early life, are enormously relevant today.

Some context: It is impossible for contemporary Americans to fully understand how Elvis Presley changed American life.

Coming out of World War II, Americans were just beginning to move beyond the Victorian systems and values that dominated all aspects of society until discredited by the Depression and upset when young men went off to war. The rules began to change.

Elvis did not just challenge those rules, he destroyed them, blew them up, shattered them. How a 19-year-old boy from sleepy Memphis, Tennessee, did this is a remarkable story by itself.

Through contemporary eyes we can appreciate his early musicality and showmanship, enjoy the songs, but we can never put ourselves at the beginning when he changed everything. In terms of American culture in the mid-1950s, he was an atom bomb. The after affects resonate today in all aspects of American entertainment.

The movie comes as close as possible in putting viewers at the explosive beginning. And it does a good job putting Elvis in the context of his times.

He was a white boy whose music was an amalgam of gospel, rhythm and blues, and country music forms. He borrowed from all three to create his own style. He was not the first rock and roll singer. But he was the engine that drove the genre into America’s heart. He was the King, though he rejected that title himself, saying the kings were his Black contemporaries.

The movie addresses an aspect of the King’s life generally explored only by his most ardent fans. It addresses, and answers this question: Did Elvis Presley steal Black music from Black musicians to build his own career and fortune?

In entertainment, many of the most odious examples of cultural appropriation seem to be mostly in our past. Blackface, perhaps the worst form of appropriation, is completely unacceptable. Asians now play Asians in the movies, putting an end to so-called yellow face. We have made some progress in properly respecting Native American culture. And we are making progress in respecting the LGBTQ communities, even in the face of hateful opposition.

Elvis, like all artists of all kinds, absorbed the cultural influences with which he was familiar and then adapted those influences in a highly personal way. What artist in any time created something so completely original as to have literally invented it?

The movie shows that Elvis was not only influenced by Black artists but was also their friend. He was particularly close to the legendary blues artist B.B. King, who had been discovered by Sun Records owner Sam Phillips, the same man who discovered Elvis.

Presley’s first hit, the song that catapulted him to superstar status overnight, was “That’s All Right,” recorded in Sun Records studios on July 5, 1954, 68 years ago this week.

The song had been a modest crossover hit in 1946 for legendary Black bluesman “Big Boy” Crudup, who was himself covering and adapting the original 1920s recording by Texas bluesman “Blind Lemon” Jefferson.

Did Presley steal Crudup’s song or was his cover just one of many made between 1946 and 1954. Did he ruin Crudup’s career, or did he help it?

Crudup said in later years that Presley revitalized his career and introduced him to white audiences.

And that is one of the keys to understanding cultural appropriation in the Jim Crow era. Throughout the South, there were radio stations for white audiences and radio stations for Black audiences and no white station would play Black music. Record labels were equally segregated. But Sun Records’ Sam Phillips, who recorded Black artists, and his friend Dewey Phillips, a disc jockey at WHBQ, began to break down those barriers. Presley, first recorded by Sam Phillips and first played by Dewey Phillips, blew the doors away.

Later, Elvis acknowledged he benefited from white privilege, though that term comes much later. White privilege in the south was not of his making even though it made him rich and famous.

From those first years, we remember Presley for the controversy generated by his overt sexuality, by those swiveling hips. But that is only part of the story.

He was a white boy in the segregated South playing music his critics derided as “n- music.” His records were burned. Preachers condemned him to hell. And segregationist lawmakers, exemplified by Sen. James Eastland of Mississippi, attempted to keep him off radio and television entirely.

Eastland was not just concerned with Presley’s hip gyrations, he was apoplectic over the impact the singer’s “colored” “jungle” music was having on young women. This is the classic black man/white woman trope, then personified in some twisted way by a young white singer.

Luhrman’s movie does a good job articulating Presley’s galvanizing effect on race and race relations in those early years.

The debate over cultural appropriation is an important one, especially in these times when a minority of Americans are literally trying to erase the cultural identity of groups they despise.

But Presley is not the example to use.

His biggest single recording ever was “Hound Dog,” first recorded by “Big Mama” Thornton in 1952. Her rendition hit No. 1 on the rhythm and blues chart for seven weeks.

Elvis recorded his version in 1956. He sold 10 million records and it is his biggest selling single of all time.

Did he steal from “Big Mama?”

In truth, the song did not have its roots in traditional Black blues. It was written for Thornton by Jerry Leiber and Mike Stoller, two young Jewish composers from Philadelphia. Leiber and Stoller were to become Presley’s most important song writers.

Therein lies the difficulty in assuming cultural appropriation without facts. Two young Jewish composers, white, write a song for a Black singer, female, which is then turned into a monster hit by a young white boy from the segregated South, who was, himself, color blind.

Cultural appropriation is an important issue worthy of discussion. But as Luhrman demonstrates, and history shows, Elvis Presley is not a good example.

www.tracy-simmons.com
Previous This Fourth of July Let’s Start Living Up To Our Name
Next How To Achieve Spiritual Well-Being Amid a Busy Lifestyle