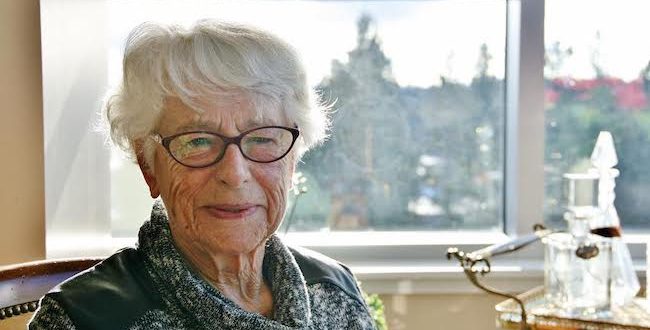 Editor’s Note: We used Peperzak’s spelling of the word “nazie” that she uses in her book, keeping it the Dutch spelling as well as in lowercase to not give them any honor.

To celebrate her 95th birthday last November, Carla Olman Peperzak gave her family the gift of her life in the form of a memoir she had been writing for the last 18 years.

The title of her book, “Keys of My Life,” has its inspiration from a piano that was made in 1923, the same year she was born in the Netherlands. It has traveled with her throughout her life, and it still is a very precious item to her.

When Peperzak began writing her memoir, she intended it to mostly be about her family’s history growing up in the Netherlands, about meeting and falling in love with her husband, and all the moves and experiences her husband’s international agricultural work gave them over the years.

But there was something missing from the memoir at the very beginning. Something she only began to talk about 10 years ago, and that was her life during the nazie occupation of her homeland and the far-reaching effects of that travesty on her life and the life of her fellow Jews.

“It is impossible to put into words and to explain what it really felt like to live during that time,” Peperzak writes in her memoir. “To lose your friends one by one, your close relatives, not to know if they were in hiding, in camps or killed. Towards the end of the war we were really hungry and we were scared all the time.”

Peperzak explains in her memoir that she was young enough (16 at the beginning of the occupation) and daring enough to work with the Dutch Resistance or “the underground” movement of that time.

“To a large extent, it was exciting to fool the Germans. It was my way of fighting the war. I did my utmost to help save people’s lives,” Peperzak writes.

She remembers passing out copies of one-page bulletins of condensed news summaries that were picked up from BBC broadcasts that the underground put together. This was an extremely dangerous thing to do at the time considering the nazies had tried to confiscate all the radios.

However, her more direct involvement with the Dutch Resistance began with her desire to help hide her family and friends. She had neighbors she trusted, who were part of the underground, and she had contacted them to help find hiding places. One thing led to another, and Peperzak took on the task of not only helping about 40 of her friends and family hide, but also helping them by creating fake ID cards, supplying them with food, and coordinating their various health care needs.

Even though, Peperzak’s immediate family and those she helped during the war survived, about 75 percent of her extended family were killed.

During the time Peperzak was adding her Holocaust experiences to her book, she also became a speaker for the Holocaust Center for Humanity’s Speakers Bureau in Seattle, Wash. She is one of only 15 survivors currently on the bureau, and she is also one of the oldest speakers, which means her experiences are significantly different than many of the other speakers because she was a young adult and not a child during the Holocaust.

Julia Thompson, education resource coordinator for the Holocaust Center, says that not only are Peperzak’s experiences unique, hearing and reading firsthand accounts from any Holocaust survivor is very important.

“Carla’s memoir is very significant, because it’s so crucial that Holocaust survivors’ experiences and memories are preserved for future generations,” Thompson says. “My hope is that memoirs like Carla’s, and books about other survivors, will ensure that people, in 15-20 years, have access to first-hand accounts and can continue to serve as testament to the struggles and triumphs of survivors.”

Peperzak explains that it is very hard for Holocaust survivors to talk about their experiences because it is just too painful to share.

She also shares that since Holocaust survivors have gotten older, they have begun to realize that it is much better for both the survivors and the world, including their very own descendants, to know what happened to those who lived during and through the Holocaust.

“We think there are at least 125 survivors in Washington right now,” Thompson says. “It is interesting, because even in recent months, local survivors new to the Holocaust Center are coming out of the woodwork and contacting us, saying that they want to get involved with the Center somehow or share their stories.  Many people took a long time to feel ready to share their experiences with others, understandably so.”

Because Peperzak’s memoir was originally intended for her offspring, she didn’t even intend to have it formally published. It wasn’t until some friends of hers read it and convinced her it was good enough to put out into the world.

“As far as the Holocaust is concerned, it is important that it’s published,” Peperzak says. “It’s not something I would have done by myself. I really had to be talked into it.”

In addition to telling her story now through a memoir, Peperzak will continue her work with the Holocaust Center’s Speakers Bureau. In 2017, she gave 26 presentations.

She writes in her book why she will continue to speak about the Holocaust: “I want to make sure that my relatives and friends and all the other victims are remembered. As long as I am able, I will try to do my part to tell the story. Before giving a talk I always pray to God to help me convey the importance of remembering. When I talk to schools, I always end with the word respect, because I think if we can learn to respect one another, we can’t kill.”

Peperzak’s book is available for purchase on Amazon as a paperback and for the Kindle.

When the book is purchased from Amazon, all royalties go to Spokane’s Temple Beth Shalom’s Yom Hashoah Fund. Yom Hashoah, or Holocaust Remembrance Day, is celebrated once a year by the Jewish community in Spokane at a service at Temple Beth Shalom to remember the 6 million Jews killed in the Holocaust. The Yom Hashoah committee encourages local middle School and high school students to write an essay or produce an art piece on different Holocaust themes annually, and cash prizes are awarded to the winners in each category.

If Peperzak has a speaking engagement open to the public, it will be listed on the Holocaust Center website under “More from our Community Partners” heading at the bottom of this link.

More information about Peperzak can be found in the Holocaust Center’s new online Survivor Encyclopedia.

Excerpts from the Chapter, “My Keys to Life”

“Life is not easy and everyone will encounter major problems through life. I firmly believe that it is not the problem itself, but how one reacts or acts toward the problem, which makes your life good or bad. My advice is to make the best of it by being positive and by trying to see the best in other people. Be ‘open’ to life, accept it and at the same time try to improve it.” (Page 19)

“I wish more for the goodness in everyone to be shown to your families and the people around you. Do not be selfish, ‘live right’ and live in ‘harmony.’” (Page 19)

“Paul said it best in his farewell letter to me. ‘Even when everything seems hopeless and all is gone, love remains and love keeps us going. We were born in love and all our life we are seeking love, and once we depart from this life, we will return to the ultimate of LOVE, the love of God, our Creator.’” (Page 19-20)

The book ends with the question of what would you have done if a nazie soldier asked you (if you were a Jew) to forgive him, which is what this story is about. Peperzak says, “It’s so easy to say ‘I forgive you’, but in your heart of hearts, it’s not so easy. So this book is very good.”

According to its Amazon.com summary, “’Night’ offers much more than a litany of the daily terrors, everyday perversions, and rampant sadism at Auschwitz and Buchenwald; it also eloquently addresses many of the philosophical as well as personal questions implicit in any serious consideration of what the Holocaust was, what it meant, and what its legacy is and will be.” It is book one of a three-part trilogy—“Dawn” (part two) and “Day” (part three) are the novels, while “Night” (part one) is Elie Wiesel’s memoir.

Peperzak highly recommends this one for especially the younger generation. Readers will learn some about Adolf Hitler’s Germany in the context of this American rowing team from the University of Washington competing in the Berlin Olympics and how they beat the odds and defeated not only the best rowing teams in the nation, but the best in the world, including Germany’s sure winners.

Previous Ask A Jew: How come Jews pound their chest when they pray?
Next Ask An Eastern Orthodox Christian: Significance of Vestments