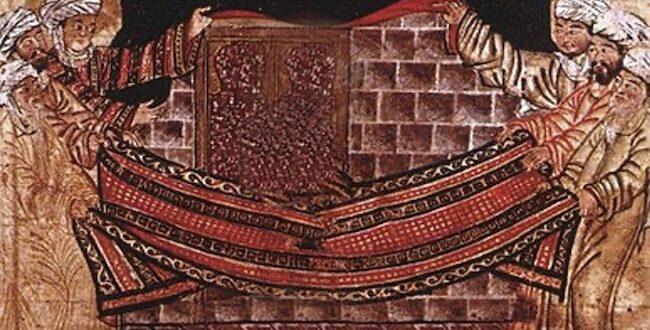 Picture courtesy: https://commons.wikimedia.org/wiki/File:Mohammed_kaaba_1315a.jpg A 1315 illustration from the Persian Jami al-Tawarikh, inspired by the story of Muhammad and the Meccan clan elders lifting the Black Stone into place when the Kaaba was rebuilt in the early 600s. This version has the entire figure of the Prophet edited out in accordance with strict interpretations of the prohibition against idolatry.

It is the year 605 (CE) in Makkah in the Kingdom of Saudi Arabia. Quraysh, the caretakers of the Holy Ka’bah decided to demolish and reconstruct it. During the reconstruction an argument ensued regarding the restoring of the sacred “Black Stone – Hajar al-Aswad” between the tribal leaders as to who will place the Black Stone to its original position. This argument became so extremely intense that tribal leaders were ready to start a fight. One of the elders trying to calm down the situation suggested that the next person to enter the Bani Shaybah gate would decide this matter.

The first man who came through that door was presented with the dispute at hand. He suggested to place the Black Stone in the middle of a piece of cloth, and then asked representatives of each tribe to hold one edge of the cloth and raise it up. Once raised, he picked up the Black Stone and placed it in its original place. This man with his supreme wisdom saved the day and stopped the beginning of a long tribal war.

The purpose of sharing this story is to introduce the man who introduced Islam. This man is no-one but the Prophet Muhammad (pbuh). I could not find any other better way to introduce him that could have exhibited his wisdom. Besides this occasion, there are many other occasions where he has demonstrated his wisdom, knowledge and showed his character and this is one of those stories.

He was also known as Al-Sadiq and Al-Amin meaning the truthful one and the honest one. With his supreme wisdom and qualities he is a role model for the Muslim ummah. It’s considered an honor to follow his sunnah – to perform every act, the way he had performed.

Oct. 8 marked the beginning of Rabi ul Awwal, the third month in Islamic Calendar, also known as Hijri Calendar. According to many historians, it is believed that the Prophet Muhammad (pbuh) was born on the 12th or the 17th of this month in the year 570 CE.

His father Abdullah Ibn al-Mutalib was the son of Quraysh’s tribal leader Abdul Mutalib ibn Hashim. His father passed away few months before his birth. His mother Amina bint Wahb also passed away when he was only 6 years old making him an orphan. Then he went under the custody of his grandfather and paternal uncles.

Muslims across the globe celebrate this month in diverse ways especially the 12th and the 17th of this month. They distribute free food, organize feast with family and friends, give charity, organize gatherings to read exalted poetry to praise the prophet, hold religious gatherings to read from the holy scripture, Quran. Mosques, streets and buildings are illuminated at night. At the same time, there are many Muslims who do not do anything on this day or month as its considered bid’ah, an innovation in Islam something that has no route in the traditional practice (Sunnah). Because many believe that if the Prophet and his companions’ peace be upon them did not do anything special in this month or day then we should not either however good deeds of charity are always encouraged not matter the occasion or time.

If you would like to learn more about the Prophet Muhammad pbuh of Islam, then I would recommend one of my favorite biographies “Muhammad: A Prophet for Our Time” by Karen Armstrong who is a British author, scholar, and a journalist on religious history and culture.