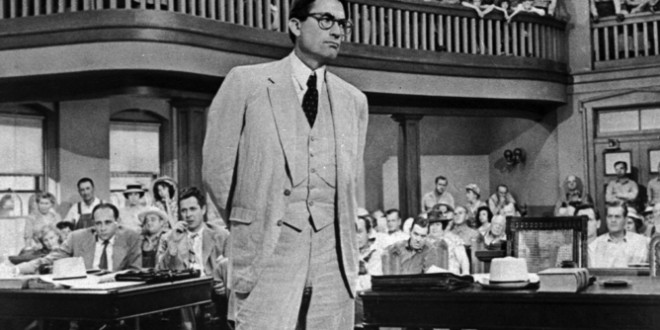 The Atticus of To Kill a Mockingbird and the ‘new’ Atticus of Go Set a Watchman come across as caricatures in today’s context. Galaxy fm/flickr, CC BY-NC

The irrelevancy of Go Set a Watchman

F Scott Fitzgerald is famous for saying that there are no second acts in American lives, but we seem to have granted Harper Lee a blockbuster: her second novel (or her first, depending on whose story you believe), Go Set a Watchman, is a bestseller before it even appears in print.

The soap opera surrounding its “discovery” and publication could be a novel in itself, with a reader’s choice of villains, knaves and Lee as the sprightly hero. Leaked previews of Watchman have stirred the pot even more; we have to get used to Atticus as more of a Strom Thurmond than a St Francis.

The prepublication pageant, however, has us looking in the wrong direction and asking the wrong questions. Written in the 1950s, both Mockingbird and Watchman offer windows into one southern writer’s grasp of race relations at a certain moment in history. But that moment is certainly gone now, and Mockingbird is a formula for a nostalgic backward look rather than a prescription for action in the present. (Some say the novel has always been a way for white audiences to console themselves into thinking that a fine speech could be equated with doing the right thing.)

The “new” Atticus of Watchman is apparently no help either: if he is no longer an icon of Mockingbird’s call for “go slow” racial justice, he’s a mouthpiece of massive resistance in Watchman.

Neither Atticus – and neither novel – works in a 2015 context.

A film devoid of racial nuance

Horton Foote’s Academy Award-winning screenplay for the film version of To Kill a Mockingbird is one reason we’re in the trance of thinking that feeling bad about injustice amounts to doing something to eradicate it. Most of us who have read the novel and seen the film probably remember the film, which largely shears off the darker complexities of Lee’s novel.

The screen version of To Kill a Mockingbird omitted many of the racial complexities present in the novel.
James Vaughan/flickr, CC BY-SA

The screen version omits characters like Mrs Dubose, whose racist haranguing of Scout and Jem is excused by Atticus because she’s fighting an addiction to medical morphine. Nor does Dolphus Raymond – sire of a mixed-race family who so loathes Maycomb’s racist hypocrisies that he fakes being the town drunk to be left alone – make an appearance.

Omitted, too, are scenes like the tea sponsored by the ladies of the Alabama Methodist Episcopal Church South who, even after the riveting trial of Tom Robinson, still cling to racist stereotypes of African Americans.

What we get instead is Gregory Peck’s sonorous baritone (which lacks any trace of a Southern accent) telling us how the best white people could have taken care of their Negro inferiors in the 1930s South if it weren’t for white trash racists. (Not in so many words, of course.)

Can we really expect Watchman, whatever its politics, to set us on the right track, to tell us how to deal with Confederate symbols and the latent racism embedded in American politics, institutions, policing practices and daily life?

Probably not. The jacket design echoes the original design of the first edition jacket for Mockingbird, which is set in the 1930s. It was an era when we mostly traveled by train (as the 2015 cover of Watchman seems to want to remind us). In the predigital “stone age,” distances were greater and time moved at a Maycomb pace.

Back then, Atticus felt he could not solely change the monolith of race relations in the South. He hoped his son and daughter, who would have come of age in the 1960s, could carry the torch. Did they? Did we?

The jacket art of Go Set a Watchman recalls the original cover of To Kill a Mockingbird.

What could be novel in this novel?

If Watchman is, as many argue, not a free-standing novel but the husk from which Mockingbird was drawn, then it is the product of a time just shy of violent crises: Freedom Summer; the killings of civil rights workers in Neshoba County, Mississippi; and the assassination of Dr Martin Luther King, Jr.

Still, one wonders whether a novel written 50 years ago tells us anything new.

In Mockingbird, Tom Robinson is gunned down by a white prison guard in what Atticus reports as an escape attempt. In 2015 we have video evidence of a white South Carolina police officer gunning down a black man, Walter Scott – not offstage a novel, but in real time. Tragically, there are more examples, including the shooting in the sanctuary of Charleston’s Emanuel AME Church – a sister church, perhaps, to the AME Church in Mockingbird where Calpurnia takes Scout and Jem as her guests.

This is not to say that the racial violence we know today didn’t exist in the 1930s.

It’s to say that we now know too much to assent to Atticus’ oft-quoted advice to walk around in the skin of others before passing judgment on their words or actions.

How much has really changed? In 2015, Robert E Lee Ewell, the villain of Mockingbird, could arm his racist fantasies as Dylann Roof armed his: with a 9mm pistol. What Boo Radley will rid us of that problem?

Like two million others, I’ve ordered a copy of Go Set a Watchman. But these days, To Kill a Mockingbird – along with the accompanying film – seems merely to add up to a wish fulfillment fantasy. We continue to watch the innocent go to prison or be killed for having darker skin. And we continue to simply feel badly, hoping that someday the jury will actually return the right verdict and all will be well – as in our dreams.