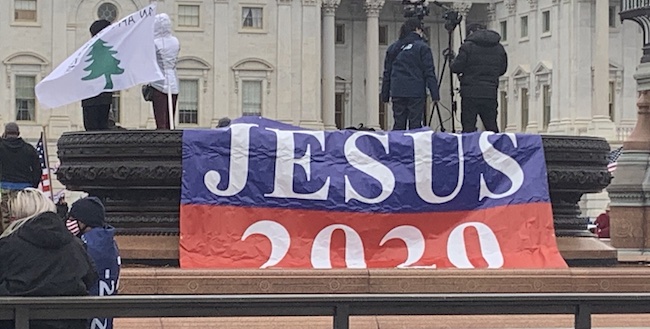 The insurrectionist mob that stormed the U.S. Capitol on Wednesday carried an array of flags and signs that indicate that not only are they Republicans, but also that they are Christians.

As the mob swarmed the Capitol steps, climbed the inaugural scaffolding and even scaled the building like it was a gym climbing wall, the now commonplace red, white and blue “Trump 2020” and “Make America Great Again” flags flew alongside flags and banners with a range of Christian symbols. A giant wooden cross was installed across from the Capitol building as well. Some of the identifiable flags were:

In addition to these flags, there was also at least one yellow banner reading “Jesus saves” seen on the Capitol steps, and multiple articles of clothing touting Christianity including a “Jesus” baseball cap and a jacket with sleeves printed with the words “Cry to God.”

While some of these flags routinely appear at Trump rallies, they are a puzzling novelty to others.  But many have long, established roots in Christianity and in American history. The “An Appeal to Heaven” flag was carried by Revolutionary War soldiers, inspired by an Old Testament story.

“Therefore I have not sinned against you, but you wronged me by fighting against me,” Jephthah says in the Book of Judges. “May the Lord, the Judge, render judgment this day between the children of Israel and the people of Ammon.”

The Christian flag has a much shorter history. It was designed in 1897 by a Sunday School superintendent and a Methodist missionary and was adopted by what is now the National Council of Churches, an organization of largely Protestant denominations, in 1942. Today, it hangs at the front of many churches.

It should be no surprise that pro-Trump demonstrators align themselves with Christianity, especially evangelicalism. The president captured 81% of the evangelical vote in 2016 and 78% in 2020, according to the Pew Center. But the appearance of symbols commonly revered in churches of all stripes seems to have been a line in the sand for many Christian viewers.

“All of the ‘turn to the cross’ and ‘pray for our nation’ posts are great, but let’s be real,” a San Antonio man named Matthew Bayer wrote on Twitter after the rioters were removed from the Capitol. “The ‘proud boys’ sit in your pews. A cross was erected outside the capital today, and the ‘Christian’ flag was flying. Scripture was all over shirts and signs. Time to call this out.”

Blake Chastain, host of the podcast “Ex-vangelical,” did just that with a tweet of a photo of the Christian flag outside the Capitol. “Tell me again how Christian nationalism and white evangelicalism – the superspreader culture that inculcates Christian nationalist ideology – isn’t culpable in today’s events and all the events that led to today.”

And Dan Webster, a retired Episcopal pastor and former newscaster, tweeted the same photo and said, “I [am] ashamed of Christian leaders these last 4 years whose silence has been compliance.”

Previous Forgiveness and Compassion Come with Rules. Those Rules Have Been Broken.
Next The Danger of Trump’s Social Media Silence