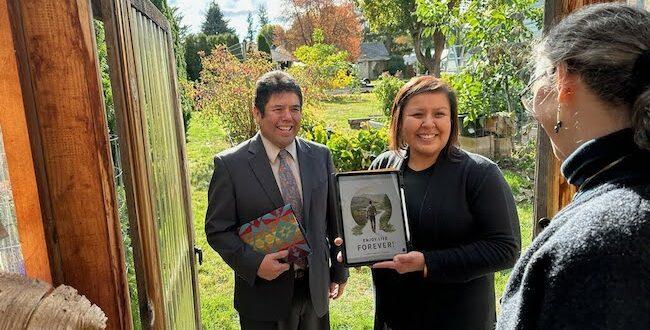 Clyde Abrahamson and his daughter, Dionne, enjoy sharing the Bible's message with fellow members of their tribe in Wellpinit. Courtesy of Jehovah’s Witnesses’ Public Information

“How is your heart?”

This touching question is a literal translation of ‘How are you?’ in Salish, an Indigenous language spoken by the Spokane Tribe of Indians.

In the northwestern United States and up into Canada, more than 20 different Salish languages were once spoken by various tribes. According to the Salish School of Spokane, those languages are all either critically endangered or extinct. Like many Indigenous languages, Salish is having to fight to survive despite its close ties to the culture and heart of the Spokane people.

Clyde Abrahamson, development manager for the Spokane Indian Housing Authority in Wellpinit, remembers hearing his family speaking the language when he was young.

“The Spokane language has a lot of humor in it,” he said. “I do remember ones who spoke the language with my dad, my grandma and others, they would be laughing all the time and speaking in the language.”

His daughter, Dionne Abrahamson, began learning her tribe’s language in 2003 with the help of her grandmother, Ortencia Ford, 79. Dionne and Ortencia have since played a part in the tribe’s efforts to revitalize the language, both working as language teachers in the community for over 15 years.

“I think it is so important to protect a language from dying out,” she said, “because that is the heart of our culture, our way of thinking.”

Dionne enjoys being greeted by former students in Salish, and she and her grandmother often use their tribe’s endangered language to share positive thoughts from the Bible with others in the community.

Reaching out to members of the Spokane tribe with the Bible’s message is a multigenerational effort in the Abrahamson family. When he’s not working as a development manager, Clyde and his wife, Henrietta, often spend their time sharing their faith with the community. As part of this volunteer work, they have been visiting members of the Spokane and Colville tribes for more than 30 years.

During the pandemic, the Abrahamsons adjusted their ministry when Jehovah’s Witnesses temporarily suspended all in-person activities. The whole family reached out to the community through phone calls and letters, Dionne and Ortencia doing so in Salish.

As someone who places great value on native languages, Dionne Abrahamson said she has also been excited to see American Indigenous languages added to jw.org — the most translated website in the world, and the official website of Jehovah’s Witnesses.

The website includes content in more than 1,060 languages, including many Indigenous languages considered at risk of dying out. Among them are Central Alaskan Yupik, spoken by some 10,000 in Alaska, as well as Blackfoot, Cherokee, Choctaw, Hopi and Navajo.

“Translating Indigenous languages is a labor of love for all those involved and for our organization,” said Robert Hendriks, the U.S. spokesman of Jehovah’s Witnesses. “The work is challenging and time consuming. But our goal isn’t to make a profit, it’s to provide the Bible’s comforting message clearly and accurately to as many people as possible.”

Dionne Abrahamson hopes that one day the Salish language may be among the Indigenous languages featured. In the meantime, she will continue to use her own language skills to share her faith with others.

“Our Creator cares about all tribes and peoples around the world,” she said, “including our little Spokane Indian Reservation.”

Nicholas Neher is a public information officer with the United States branch of Jehovah’s Witnesses.

Do you have any coverage of the child abuse lawsuits that have been filed in Spokane against Jehovah’s Witnesses congregations that failed to protect children from serial abusers?
I feel that is a much more important story than helping spread religious propaganda to minority communities.