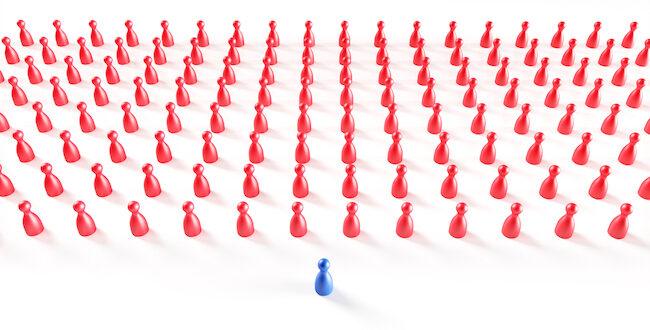 The Gospel of Weak Belief (But Strong Faith)

The Gospel of Weak Belief (But Strong Faith)

Today I will be preaching the Gospel of Weak Belief. Don’t worry, I’m not going to start a new church. Besides, I don’t think too many people would come.

Jerry Falwell is one of my favorite preachers of strong belief. He once declared that God does not answer the prayers of Jews. Not only is Falwell claiming to know God’s mind, but he is also undermining divine freedom.  Surely, God can decide to answer any prayer that God chooses to.

Others of Falwell’s ilk, appear to make God a real weakling.  I love the cartoon in which former Sen. Jesse Helms, after trying so hard to get prayer in the schools, asks the Lord how Christian values can possibly survive, and God’s answer is simple: “Don’t worry, Jesse, I can take care of it.”

One might interpret the strong belief of fundamentalism as a new form of Gnosticism (from the Greek gnosis=knowledge), although contemporary fundamentalists do not share the esoterism of the ancient Gnostics. The Gospel of Weak Belief could be seen as a form of agnosticism, or more accurately, as a reaffirmation of Christian fideism, putting faith before knowledge claims. My favorite Christian fideist is the Danish philosopher Soren Kierkegaard.

If there is a Gospel of Weak Belief, who are its prophets? I submit that the Buddha, Confucius, Laozi, and Jesus are the saints of weak belief.

The Buddha was frequently asked questions such as the following: (1) Is the world eternal or not eternal? (2) Is the soul the same as the body or different from the body? (3) Is there life after death or no life after death? Sometimes the Buddha would just sit in silence as a signal that the questions were inappropriate.

When pressed, the Buddha answered that these questions are “not calculated to profit, they are not concerned with the Dharma, they do not redound even to the elements of right conduct, nor to detachment, nor to purification from lusts, nor to quietude, nor to tranquilization of heart, nor to real knowledge, nor to the insight of the higher stages of the Path, nor to Nirvana.”

The secret of the Buddha’s Middle Way is to ascertain the difference between desires that can be fulfilled (they do not bring new karma) and cravings, desires that cannot be fulfilled, which will lead to more karmic debt. One of the most subtle and deep-seated desires is a “craving for views,” typically expressed in philosophical queries such as the ones above – philosophers! Beware of this sin.

When Confucius was asked about the existence of spirits and divine retribution, he, too, deflected the question, as the Buddha did. Instead, he encouraged his disciples to develop their virtues and treat others as they would be treated.

The Daoist Laozi, Confucius’ elder contemporary, thought Confucius was arrogant, claiming far too much knowledge.  Legend has it that Laozi said this to Confucius: “Rid yourself of your arrogance and your lustfulness, your ingratiating manners and your excessive ambition. These are all detrimental to your person.”

Laozi was also a master of dialectical thinking, especially what might be called the dialectic of reversal. For example, power when exercised to an extreme becomes impotence; whereas,  weakness and softness (like water slowly eroding the elements) is real strength.

As the “Daodejing” states: “Time will show that the humblest will attain supremacy, the dishonored will be justified, . . . those content with little will be rewarded with much, and those grasping much will fall into confusion” (chap. 22).

In his support for the dispossessed, Jesus loved the dialectic of reversal just as much as Laozi did. “So, the last will be first, and the first last” (Matt. 20:16); “For everyone who exalts himself will be humbled, but he who humbles himself will be exalted” (Lk. 18:15). The ultimate act of humbling is seen in the kenosis hymn of Philippians 2:5-11, in which Jesus “empties himself” (kenosis) as symbol of what Christian discipleship really means.

Jesus’ commitment to weak belief is also found in his parables. Parables are open-ended and offer many levels of meaning, and they preserve the freedom of the respondent. Jesus and the Zen Buddhists were more radical than the Buddha; the point of a parable or a koan is not an ethical one, but a provocation for people to transform their lives spiritually. This is why some Zen Buddhists, in order to forestall idolatry, once outrageously declared: “If you see the Buddha on the road, be sure to kill him.”

The early church made the parables into allegories (for example, Jesus is the sower) and turned rich, polyvalent discourse into the univocal dogma of strong belief. Even today Christian ministers too often interpret the parables in a conventional ethical way that obscures their transforming power.

There is another less noticed, but equally powerful reversal in Jesus’ rebuke of Thomas: “Blessed are those who have not seen and yet have faith” (Jn. 20:29). Jesus’ point, I believe, is clear: Thomas was wrong to demand the evidence of strong belief.

In this verse Jesus is condemning the first Christian fundamentalist and essentially saying “blessed are those of weak belief.” Paradoxically, the partner of strong belief is weak faith, and God’s rebuke of Jesse Helms is a good example of strong belief  but weak faith in what God is able to do.