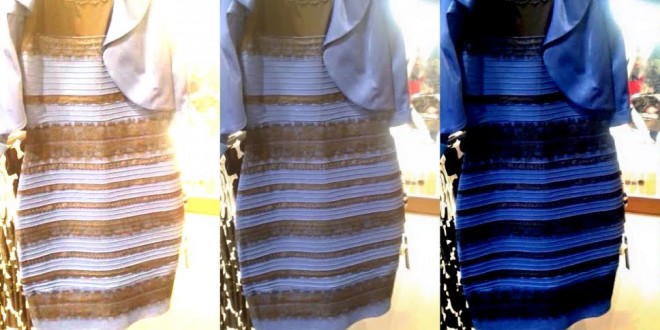 The gold or black dress debate shows the nature of knowledge, compassion

There’s a photo of a dress that is making big waves right now, reportedly causing deep rifts in friendships, straining marriages and causing many to question their sanity and everything they knew about the nature of reality. Some people see a gold and white dress, others see a black and blue dress. And this is how the world ends.

Why is this one photo causing so much fuss? One reason is that most optical illusions can be seen “both ways” by most people. Take the classic duck/rabbit illusion. A person sees a duck, then they see a rabbit, and they learn to switch back and forth and see the duality of the image. We can chalk it up to a an intentional ambiguity in the duck/rabbit drawing, everyone smiles, and we move on.

The thing with the photo of the dress, though, is almost everyone see it as either black and blue, or they see it as white and gold. As hard as they try, they can’t see it “the other way.” Most who first come across it think they are part of some elaborate hoax, because its very obviously one color and everyone saying otherwise is having a good laugh at their expense. There is no “switching” sides. Even for those who do end up seeing the photo as the other set of colors, its unexpected, unintentional, and completely unnerving when suddenly the same photo shows a different colored dress.

So what does this say about us, as human beings? First, optical illusions are not just funny parlor tricks that have nothing to do with reality. Optical illusions exist because the human brain, as much as we all love it, is not very good at judging reality. Illusions are just the tip of the iceberg — the human mind’s flaws are well known, and have been used for amusement and exploitation since the dawn of civilization. We don’t just have optical illusions, but auditory illusions, logical fallacies, unconscious bias, and a biological, instinctual understanding of physics and causality that are great for surviving day-to-day life but very imperfect at making sense of the way the world works. Charlatans, con men, advertisers, religious and political leaders, have all taken advantage of these flaws — knowingly or unknowingly — throughout human history. These flaws are also innate to every person — no amount of personal focus or attention can alleviate them, and thinking otherwise is hubris.

The second lesson we can get from this dress drama is that different people see the world in fundamentally different ways. Any two people’s evaluation of the exact same information can be completely different, and this difference can be so visceral that it’s impossible for the person to alter that initial judgement. A person may come to rationally accept that their perception is wrong, but still find it impossible to change that perception. This should lead us to show a sense of compassion for all people, no matter how basal our differences are with them. You don’t need to see eye-to-eye. In fact, it might literally be impossible, but that doesn’t mean you can’t acknowledge someone else’s experience and strive to understand it.

The last lesson I think we can pull from this is that despite our myriad perspectives and very flawed human minds, objective truth is knowable. The actual dress in the photo is, unequivocally, black and blue. Other photos of the dress prove this.  Even if we didn’t have other photos, it’s possible using this one contentious photo to discover the objective truth — as they did over at Wired. Wired’s photo team explained how they worked from both theories, that the dress is gold/white or the dress is black/blue. Balancing the photo with the assumption that the dress is gold makes the rest of the photo non-sensical: everything becomes gold and white. Balancing the photo with the assumption that the dress is black makes the other elements in the photo more visible: “It became clear that the appropriate point in the image to balance from is the black point”. This approach — testing opposing theories in a systematic way and choosing those that make the most sense of all available information – is the only way to find objective truth about the real world.

Even knowing the true colors of the dress, and knowing how the accidental illusion works, to my eyes that damned photo still shows a gold and white dress. I’ve accepted the fact that what my sense of sight tells me will forever be wrong on this point. I may correctly identify the individual colors in the photo, but my brain just can’t consolidate those colors with contextual clues into an accurate perception of the dress. I’m OK with that. I’m fine with the idea that my brain is broken. Really.

A big part of the humanist perspective is trusting our innate sense of compassion and empathy when dealing with human beings and their experience; but to understand our own human limitations when it comes to dealing with objective reality and trust that a scientific approach is a better guide than our gut instincts.

Previous Poll: Most Americans see combating climate change as a moral duty
Next After the book fair: a night of long knives in Bangladesh