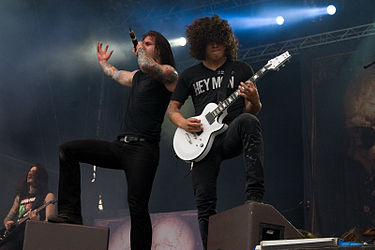 The Gig Is Up: Christian rocker admits he’s not really Christian

His bandmates reacted by saying their former head was crazy and creating a new non-Christian metal band that will soon release its debut album. What really shocked the Christian metal world was how Lambesis said how he doubted many of the Christian metal bands As I Lay Dying play alongside were Christians. They were all just acting out a role, he claimed, because the money was good. The image was the most important part of the act. It is interesting to point out his defense in hiring out a hitman to do away with his wife was that he was on steroids. He got on steroids to look better and get to the next level. (the next level of pretense?) He had the image of a good Christian, fresh face wife, the required children and the right words. Only Jesus was missing from his life. Would it be rude to point much of the Evangelical world shares a lot with him?

We have been treated to a long parade of Christian pastors, musicians, and actors who have gotten into trouble playing to an image, rather than being real humans. Mark Driscoll has had to deal with revelations of plagiarism, fraud committed to get his book on the Best Seller list, and internal fighting at his Mars Hill. Affairs and scandals with money from people that look pretty good in front of a camera and have the right image have become front page stories in the Christian press.

What to make of image conscious Christianity, where Christian portrays one face to the public and another to themselves. When Christianity reduces only about more morals and less about Jesus, these things have to be expected. The image of a good Christian has become more important than the search for Jesus.

Previous Is emotional contagion the same as theological covenant? Not on your private or public life
Next REVIEW: HBO’s The Leftovers, a grim take on the limits of grief and faith