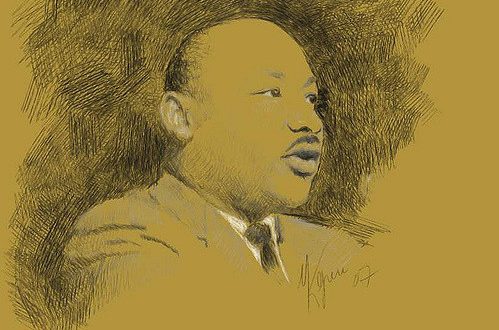 But in a year where he has gone from praying for COVID-19 victims, to speaking on the steps of a historic D.C. African American church whose “Black Lives Matter” sign was destroyed and burned by the Proud Boys, a virtual prayer breakfast this weekend was especially meaningful for the young preacher and his peers.

“In the past, we looked back, but now we are called to bear the cross and to be engaged in the battle that is in Washington, D.C,” said Bowen during the event on Saturday.

Faith leaders tuned in from around the heavily-fortified nation’s capital, patrolled by Army National Guard troops in the wake of the deadly insurrectionist violence at the U.S. Capitol Building Jan. 6 and ahead of President-Elect Joe Biden’s inauguration Jan. 20. In state capitals across the country, lawmakers have increased security amid threats of more far-right violence this holiday weekend that is usually a mix of memorial events and thousands rendering acts of service on behalf of the Civil Rights titan. Now King’s words and legacy are giving them renewed hope.

Rev. Christine Y. Wiley, a pastor of Covenant Baptist Church in Southwest D.C., read 2 Corinthians 6:1-2 to preach at the prayer breakfast, teaching that “now is the acceptable time” to push against racism and toward the beloved community that King pushed for.

Celebrations Across the U.S.

In Atlanta, the culminating program for the weeklong celebration of Dr. Martin Luther King, Jr.’s life and legacy is the Beloved Community Commemorative Service. The event will feature Bishop T.D. Jakes, pastor of The Potter’s House, a megachurch in Dallas. He will be live-streamed to multiple platforms, including Facebook and The King Center website.

Islamic Relief USA, a nonprofit humanitarian and advocacy organization, will provide hot meals and hygiene kits to people in need in the D.C. area. According to a statement, the goal of the effort is to help provide people with basic needs like food, winter coats and safe shelter during the coronavirus pandemic. Food will be provided by La Cocina.

Praise dancers from the Alfred Street Baptist Church in Alexandria, Virginia, performed over the weekend on Facebook live and YouTube.

While most events will be virtual, Biden and Vice President-Elect Kamala Harris have still designated the federal holiday as “The National Day of Service” and created a list of things people can do from home, including writing letters to seniors in nursing homes, knitting blankets for the homeless, filling a virtual shopping cart for a military family, hosting a grassroots fundraiser for a non-profit, contactless food or warm coat donations and more.

“Service is part of the character of our nation. And now, more than ever, we must do everything we can to help our neighbors and our community,” Harris said in a video that she tweeted.

In one of the final acts of his presidency, President Donald Trump signed on Jan. 15 an annual proclamation designating MLK Day as a federal holiday. His statement alluded to the recent violence at the U.S. Capitol.

“In the face of tumult and upheaval, Dr. King reminded us to always meet anger with compassion to truly ‘heal the hurts, right the wrongs and change society.’” Trump said in a statement from the White House. “It is with this same spirit of forgiveness that we come together to bind the wounds of past injustice by lifting one another regardless of race, gender, creed, or religion and rising to the first principles enshrined in our founding documents.”

Since retiring as the Executive Vice President of Harding University, Jimmy Carr has devoted part of his time traveling around the world and working on the International Commission on Religious Freedom.

Bernard Demczuk, a Civil Rights Veteran who was in the Student Non-Violent Coordinating Committee between 1964 and 1966, will be speaking at several King Holiday programs on Zoom.

Demczuk, a resident of the District of Columbia, said the incident at the U.S. Capitol shows that White supremacy has been fully exposed: it is a poison that is killing America, he said.

“We need to reverse 400 years of the White supremacy and… root out these traitors against our democracy” through reforming the criminal justice system, he said.

Martin Luther King III will speak at a virtual event Jan. 18 hosted by the Charlotte YMCA, starting at 9 a.m.

King III said in a tweet Saturday, “Today and every day, I want us all to remember my father as a kind, loving man who spent his life serving his community. Here’s a throwback to a tribute featuring @StevieWonder. #MLK”.

Previous Ask A Catholic: Who Do You Think The Next Pope Will Be?
Next Spokane Celebrates Dr. Martin Luther King Jr. Day Virtually

[…] Informations on that Topic: spokanefavs.com/the-first-virtual-mlk-day-aims-to-renew-hope-in-america/ […]