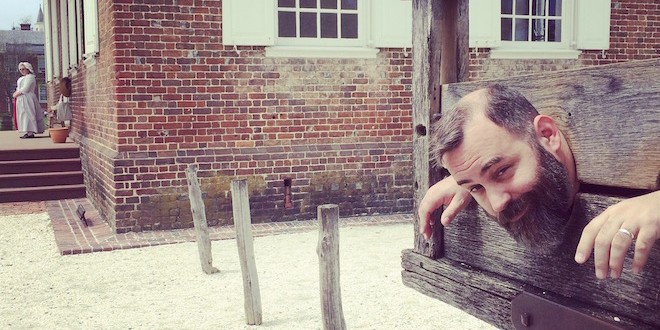 The Faith of My Fathers

I returned recently from a trip to Virginia and had the pleasure of indulging my love of history with a chance to visit early American Revolutionary War and Civil War cities, sites and museums.
One of the aspects of my trip that I enjoyed the most was being overwhelmed with the strong witness of the Christian faith in early American life and politics; to stand in the locations where the first English colonists worshipped was a surreal moment of connectivity to my own family ancestors who came to America on the Mayflower and others who fought in the revolutionary war.
It’s been fascinating to find out that there are still congregations that have been gathering since the colonial days.
Virginia
Name: St. John’s Episcopal Church
Date founded: 1610
Location: Hampton
Denomination: Episcopal
Fun fact: Not only is St. John’s the oldest English-speaking parish in America still in existence, but it is also home to the oldest communion silver still used by an American church. The chalice and patens were made in London in 1618.
Pennsylvania
Name: Christ Church in Philadelphia
Date founded: 1695
Location: Philadelphia
Denomination: Episcopal
Fun fact: Because of the well-known Revolutionary leaders who worshipped here, Christ Church is known as “The Nation’s Church.” Its burial ground is the resting place of Benjamin Franklin and four signers of the Declaration of Independence.
If you are a fan of these time periods, you might also enjoy the AMC show “Turn”  that “follows New York farmer, Abe Woodhull, who bands together with a group of childhood friends to form The Culper Ring, an unlikely group of spies who turn the tide in America’s fight for independence.”
I was surprised to learn just how young many of the revolutionaries were. Todd Andrlik’s compiled a list of the ages of the key participants in the Revolutionary War as of July 4, 1776 for a article he wrote for the Journal of the American Revolution.
“Many Founding Fathers were less than 40 years old in 1776 with several qualifying as Founding Teenagers and Twentysomethings. And though the average age of the signers of the Declaration of Independence was 44, more than a dozen of them were 35 or younger!
Marquis de Lafayette, 18
James Monroe, 18
Gilbert Stuart, 20
Aaron Burr, 20
Alexander Hamilton, 21
Betsy Ross, 24
James Madison, 25
Thomas Jefferson, 33
John Adams, 40
Paul Revere, 41
George Washington, 44
Samuel Adams, 53”
(http://allthingsliberty.com/2013/08/ages-of-revolution-how-old-1776/)
Growing up way over here on the West Coast can disconnect us from the deep and rich history that we have as Americans, especially those who call themselves Christians. Being a participant in public school education I am familiar with the heavy handed secular revisionist’s goals in retelling the history of Christianity in America.
It’s unfortunate that the sins of our fathers, have somehow been allowed to expunge the good of the faith of our fathers.
I wish I could of been more purposeful in exposing my children to the rich heritage of their family and the history of our founding fathers and mothers faith in the early days of our country.

Previous Sex Outside Marriage: Sinful or Sensational?
Next Colliding visions of marriage at the Supreme Court (ANALYSIS)