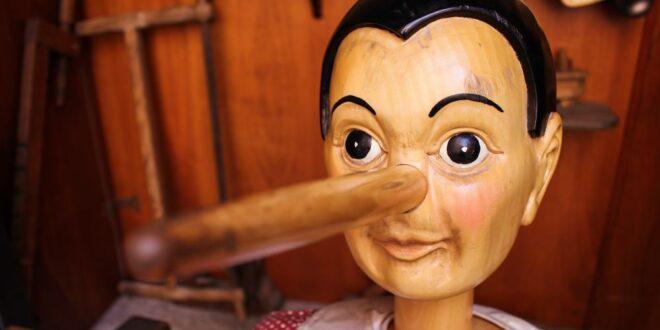 The Evil in This World: Is It Evil to Lie?

The Evil in This World: Is It Evil to Lie?

Editor’s Note: FāVS has launched a new series on The Evil in this World. We see it every day in the murder and mayhem that trouble our lives. The world’s great religions have an explanation for this and different ways to describe the battle between good and evil. Those who do not subscribe to a religious tradition have their own perceptions of evil and good. How does your belief system describe both forces and how does it help you cope with the notion that evil exists in this world? Has your faith ever been shaken by the evil around you?

The recent SpokaneFāVS series on “The Evil in this World” may have missed something. Evil is certainly abundant; multiple examples are provided. But how much is focused on what may be the most common evil of all — lying? This simple act ranges from the deliberate whopper to nuanced shading of truth, from military propaganda to religious leaders denying child molestation to rationalization.

And then there are politicians. “Serial liar George Santos is the politician Americans deserve,” crowed the Guardian. “His lies are the product of a political system that incentivizes dishonesty, punishes sincerity and is rife with opportunities for petty crooks.” Is lying is so deeply embedded in our culture that “everybody” lies?

If so, so what? If lying is evil, then there is probably no more widespread example of evil.

What does God say?

Surveying a few thousand years of spiritual guidance confirms that religions unanimously consider lying evil, although details differ greatly. For example Hinduism, perhaps the oldest extant religion, is inconsistent. Some Hindu scriptures allow lying to women under certain conditions.  In Zoroastrianism, “the adversary of the Ordered cosmos is the cosmic Deception, or Lie.”

Judaism’s Ten Commandments state, “Thou shalt not bear false witness against thy neighbor,” generally considered prohibition against all kinds of lying. Other condemnations of lying occur throughout the Old Testament and are further reinforced in the Gospels.

Several centuries before Christianity, Buddhism arose independently in India. Among the Buddha’s teachings are “The Five Precepts,” a moral guide comparable to Judaism’s Ten Commandments. The fourth precept is “to abstain from speaking the wrong way,” interpreted to forbid lying, as well as gossiping or using rude language.

Centuries later, Christianity reinforced the importance of truth, notably when Christ says to his Jewish followers, “If ye continue in my word, then are ye my disciples … And ye shall know the truth, and the truth shall make you free.” But for those who don’t, Christ clarifies, calling the devil “the father of lies.”

In Islam, lying is strongly forbidden in the Quran. Surah an-Nur 24:8 states, “The curse of Allah be on him if he is one of the liars.” Lying is “an evil act that should be avoided at any cost.”

Baha’u’llah, who was raised a Muslim just as Christ was raised a Jew, quotes the Quran (45:6) in one of his own written passages: “Woe to every lying sinner, who heareth the verses of God recited to him, and then, as though he heard them not, persisteth in proud disdain! Apprise him of a painful punishment.”

Baha’u’llah cites this verse to reinforce his own teachings: “The implications of this verse, alone, suffice all that is in heaven and on earth, were the people to ponder the verses of their Lord.” Elsewhere he states that the purpose of his revelation is to cleanse humankind from “lying tales”:

“Our sole purpose in raising the Call and in proclaiming His sublime Word is that the ear of the entire creation may, through the living waters of divine utterance, be purged from lying tales and become attuned to the holy, the glorious and exalted Word which hath issued forth from the repository of the knowledge of the Maker of the Heavens and the Creator of Names. Happy are they that judge with fairness.”

‘Abdu’l-Baha, Baha’ullah’s son and appointed successor, clarified his father’s admonitions with these words, spoken more than a century ago to an early Baha’i visitor to the Holy Land:

“Consider that the worst of all qualities and the most odious of all attributes, and the very foundation of all evil, is lying, and that no more evil or reprehensible quality can be imagined in all existence. It brings all human perfections to naught and gives rise to countless vices. There is no worse attribute than this, and it is the foundation of all wickedness.”

Based on religious teachings throughout history, lying is definitely evil. But one particular form of lying seems most insidious: rationalization. Lying to oneself is the beginning of all other lies. We all do it, if only occasionally. “Rationalization is proof of infinity,” Jolie suggests. I’ve been agreeing with my wife for 61 years, and I’m not stopping now!

Rationalization, lying to one’s self, gives us permission to lie to others. Lying to ourselves distorts our perceived reality. If we do it often and long enough, we lose our ability to distinguish our personal desires and beliefs from reality: We “cannot distinguish fantasy from reality.” That’s a definition of insanity.

As Baha’u’llah wrote: “The tongue I have designed for the mention of Me, defile it not with detraction. If the fire of self overcome you, remember your own faults and not the faults of My creatures, inasmuch as every one of you knoweth his own self better than he knoweth others.”