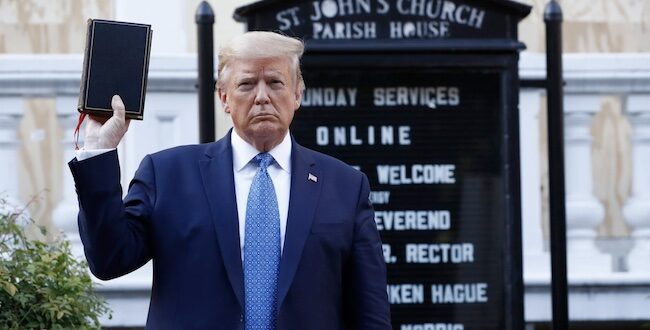 President Donald Trump holds a Bible as he visits outside St. John's Church across Lafayette Park from the White House on June 1, 2020, in Washington. (AP Photo/Patrick Semansky)

In the iconography of Donald Trump’s presidency, the place of religion can be captured in two photographs.

There’s the one of him hefting a Bible in front of St. John’s Episcopal Church across Lafayette Park from the White House during the George Floyd protests on June 1, 2020. Then there’s the image of a supporter erecting a wooden cross in front of the Capitol on Insurrection Day, Jan. 6, 2021.

No president in American history has so overtly, by word and by deed, devoted himself to appealing to evangelical Christians as Trump. And never have Christians — that is, the subset he’s assiduously appealed to — responded with such devotion.

We identify that subset as “white evangelicals,” who constitute a quarter of the national electorate and who vote Republican by margins of 3- or 4-to-1, according to election surveys.

But it’s important to understand that the surveys do not create this religious grouping by identifying and collecting people according to their evangelical denominations — Baptists, Pentecostals and the like — and grouping them with nondenominational Christians who by and large belong in the evangelical fold. They simply cross-tabulate those who say they’re white and those who say they’re “evangelical or born again.”

These days, 40% of mainline Protestants and 28% of Catholics say they’re born again. In other words, a lot of “evangelical Christians” are not evangelicals the way religion scholars or even many laypeople understand the term. A more accurate term for “white evangelicals” as a political bloc would be “white conservative Christians.”

Which is not to say that Trump didn’t focus most of his attention on actual evangelicals.

It began with the 2016 campaign. Trump’s leading rival was Texas Sen. Ted Cruz, an evangelical who declared his play for the evangelical vote by announcing his candidacy at Liberty University.

But a week before the evangelical-rich Iowa caucuses, the then-president of Liberty, Jerry Falwell Jr., endorsed Trump. Although Cruz managed to win the caucuses anyway, Trump succeeded in beating out the rest of the field for a strong second place. From then on, he was on a glide path to the nomination — aided and abetted by positions calculated to appeal to white evangelicals above all.

After the San Bernardino killings in December 2015, Trump began urging that Muslims be prevented from traveling to America. A few months later, he began vowing to repeal the so-called Johnson Amendment, which prohibits churches (and other nonprofits) from supporting or opposing political candidates on pain of losing their tax-exempt status.

He proclaimed himself pro-life and said he’d appoint justices who would overturn the Supreme Court’s Roe v. Wade abortion decision. And he appointed an evangelical advisory board comprising 25 prominent pastors and political operatives on the religious right.

So despite Trump’s obvious moral shortcomings and lack of personal piety, “white evangelicals” turned out in droves and gave him 80% of their vote — as high a proportion as they’d ever given a presidential candidate.

After the election, Trump delivered. He reinstated the so-called Mexico City policy, barring federal funding for international family planning agencies that so much as discussed abortion. Going beyond previous Republican presidents, he extended the policy to cover all global health organizations.

Keeping his promises from the campaign trail, he banned travel from a number of majority-Muslim countries in a series of executive orders ultimately upheld by the Supreme Court. He sought to do away with the Johnson Amendment, claiming (falsely) to have actually succeeded in doing by executive order.

He relocated the U.S. Embassy in Israel from Tel Aviv to Jerusalem and abandoned long-standing U.S. opposition to Israeli settlements on the West Bank — more to appeal to evangelicals than to American Jews.

Uninterested in the substance of the Bush-Obama faith-based initiative, he reversed former President Barack Obama’s requirement that government-funded religious social service providers refer to alternative providers clients who requested it.

To be sure, these actions were not designed solely for evangelicals. The anti-abortion and religious liberty measures also had a specifically Catholic audience in mind. Lest they miss the point, Trump visited the St. John Paul II Shrine in Washington one day after hefting the Bible in front of St. John’s Episcopal.

Trump’s unstinting appeal to white conservative Christians created a degree of religious enthusiasm that was unprecedented in American political history, as suggested by the display of Christian symbols and prayer outside the Capitol on Jan. 6.

But in the end, it wasn’t enough.

According to this year’s problematic exit polling, his support among “white evangelicals” dropped to 76%, even as their proportion of the total vote rose from 26% to 28%. More dependable, I’d say, is the AP’s new VoteCast survey, which found Trump getting fully 81% of their vote but showed their proportion of the vote down to 23%.

Meanwhile, VoteCast had the nones increasing their share of the total by about one-third, from 15% to 21%, and their preference for the Democratic candidate rising from 67% to 72%. (The exit polls show nones at 22% of the total vote, with 65% favoring the Democrat.)

The best I can tell, Trump’s pro-Christian presidency at most enabled white conservative Christians to hold their own in the biggest election turnout in a century. Its largest impact was on those most removed from the Christian agenda, whose turnout it boosted enormously.

Your support can help pay for our subscription to the RNS.