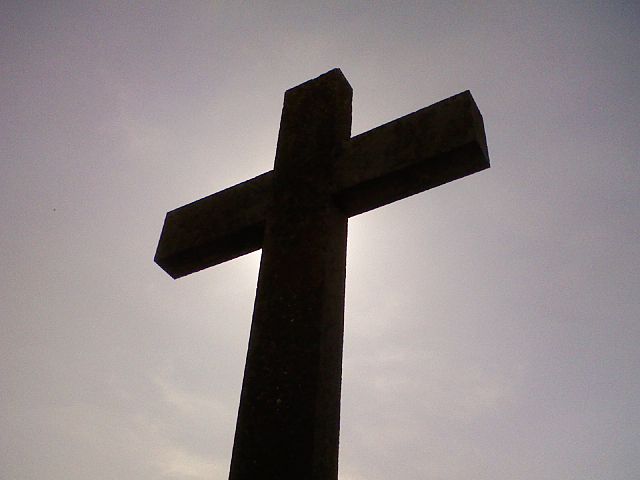 Close up, silhouetting the cross at Llanddwyn Isle (Angelsey, Wales).

The Eagle on the Cross

The Eagle on the Cross

According to an Aug. 30 FāVS article, a group called We Believe We Vote is bringing Mike Huckabee to Spokane in October to encourage Bible believers to vote. This might be good news since all citizens should vote. Bible-believing voters will presumably support candidates who work for social justice; pushing towards an inclusive, caring society that welcomes strangers as the Bible admonishes us to do.

I am bothered, however, that the logo of We Believe We Vote represents the American bald eagle perched atop a red, white, and blue cross. Why is our national bird of prey hovering over an Americanized version of the cross upon which Jesus was crucified?

Maybe We Believe We Vote believes in the power and the right of America to prevail over or through the cross, but the last I heard the cross was sufficient for the world’s salvation and didn’t need the support of any nation.

Nationalism of any sort is antithetical to the Gospel. From the get-go, European settlers who colonized what would become America claimed a special relationship with the God of the Bible. Puritans from the City on a Hill compared themselves to the Israelites of yore. Euro-American civilization was built over the graves of Indigenous Americans and through slave labor. As 19th-century Black abolitionist David Walker pointed out, enslaved Black Americans had a far better claim to be the new Israelites who needed to liberate themselves from their Egyptian-like white masters.

The American Flag in Church

Another objectionable display of American nationalism is the presence of the American flag in many places of worship, including mine. I grew up in a German Lutheran church that was eager to make clear its allegiance during WWI; the flag would be flying right next to the altar. During WWII, more American flags were displayed in response to the Nazis hanging their flag in the churches of countries that they had controlled. Two wrongs just spread the sin of nationalist idolatry. A few years ago, a pastor of the church I now attend tried in vain to have the flag removed. It had become dear to the hearts of older members, especially veterans. While one can understand the need for veterans to have their service honored, this should not trump the need to have places of worship free from sacrilegious distractions.

Yet another egregious nationalist appropriation of Judeo-Christian theology was the placement of “In God We Trust” on our paper currency in the 1950s to show that we capitalists were not like those godless Communists. Can you imagine how Jesus would feel, knowing he threw money changers out of the temple and warned us that we could not serve two masters. Imagine the reaction of having the name of God on money, the love of which is the root of all evil, especially, it seems, in America.

Also on our dollar bill is the Latin phrase “Annuit Coeptis”—“[He/Jupiter/God] favors our undertaking.” This is from Virgil’s “The Aeneid,” written to commemorate the establishment of the Roman Empire. In the late 18th century, the Latin phrase was placed on one side of our Great Seal; on the other side is the American eagle. Our Founding Fathers were even more enamored of ancient Rome than they were of ancient Israel. “Annuit Coeptis” should remind us that Americans were not the first to claim God’s special favor, to merge piety with patriotism. Empires like the Roman and doubtless like ours, rise, decline, and fall. Christian nationalists should be mindful of this when they link the fate of their religion to that of their country. And, given the Taliban’s recent take-over of Afghanistan, all of us should be mindful of the danger when religious zealots control the fate of a nation.