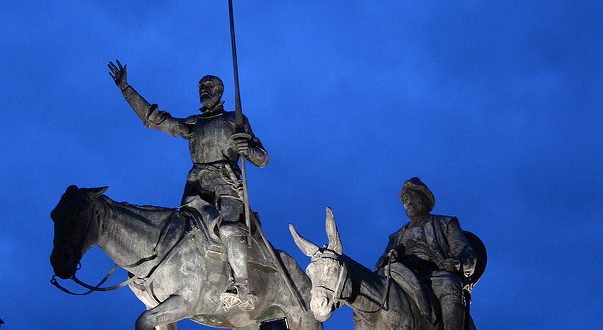 The Don Quixote of Christianity

Don Quixote was a fictional character who deluded himself into believing that he was a valiant knight. He possessed all the virtue and chivalry of knighthood, but he simply lacked the basic fact that he was actually a knight. In fact, he was kinda’ insane. There is one famous story where Don Quixote charges out to fight menacing giants, when in reality all he was doing was trying to fight windmills.

Don Quixote reveals to us a rather unfortunate side effect of strong belief. A person can be as genuine and sincere as a noble knight, but at the end of the day is really only making a fool of himself. The beauty of the Don Quixote story is that the fool never becomes the wiser. Quixote continues until the end seeing himself as a valiant knight. In literature we can appreciate the story because Quixote avails himself upon one imbecilic adventure after the other. But in the real world Don Quixote’s can be very dangerous.

Now I am not one to propose that religious belief in principle is dangerous. I value my own religious beliefs, and I respect that others will have the same devotion to their own beliefs. And so I take my poetic license and stand upon my honest conviction and say that in naming a person as the Don Quixote of Christianity that what I am not doing is saying that such a person is a threat to any other person, though it may actually be the case nonetheless. The Don Quixote of Christianity is going to be one who believes so strongly in their religious convictions that they will often appear as a fool.

For some this may be a great compliment. Many Christians believe that we ought to look foolish to wise men, or to the secular world. And so I simply leave it at that. Don Quixote was a hero in his own mind, and it is obvious from the story that this was all Don really needed in order to heroic. Whether or not anyone agrees with his own appellation I leave for other discussions.

And so I name Ken Ham as the Don Quixote of Christianity. Ham’s hijinks range from trying to debate Bill Nye without appealing to foundational evidence to building a replica of the Ark that will not float. Ken is like many Christians who believe that our planet is roughly six thousand years old. One of his recent displays at the Creation Museum depicts giants having gladiator like battles with dinosaurs. Ham is a very devote believer. But it is not his devotion that I bring into question.

Recently Ham responded publicly to a news article that suggested that fundamentalist religion could be a primary source for fake news. Huffington Post submitted an article that made the argument that Christian Fundamentalists have engaged in a proto form of fake news since the 19th Century when the movement really took off from denying evolution and historical criticism of the Bible. Whether this article has any credence is of little importance. Ham’s response is so classically Don Quixote that it will forever be etched upon my mind. This is what he wrote about the Huffingtonpost article:

“Huffington Post continues to be a FAKE NEWS site printing fake news against Christians and with its anti-Christian agenda. They printed a fake news item claiming Christians are responsible for fake news — and then linked to the Creation Museum as an example of fake news.”

Just so we are clear on this. The Creation Museum is a replica of the Ark that does not float. It is rather large in person, but is still by far a small boat compared to the Titanic, which was also recently rebuilt and can actually float. The Creation Museum depicts giants fighting dinosaurs. The Creation Museum denies evolution which is typical for Christians, but embraces evolution after the flood so that the number of animals actually on the Ark can be relatively small. The Creation Museum interprets all of its “scientific” information through a literalization of scripture, meaning that it is first a foremost biased reporting which is the cornerstone of fake news. Ham admits this in his debate with Bill Nye. When asked what could change his mind, Ham responded by saying that nothing could change his mind except what was revealed in scripture.

And in the best turn of events Ham accuses the Huff for being fake news because they are reporting on the very things Ken Ham is proud of for his own faith. His own hyper devotion to the Bible and his singular and simplistic devotion to shaping all things around “Christian” explanations are the very things that the Huffington Post is describing as characteristics that lead to fake news. But instead of taking the compliment for what it is, Ken Ham has to charge out and fight those windmills, and that is why I call him the Don Quixote of Christianity.