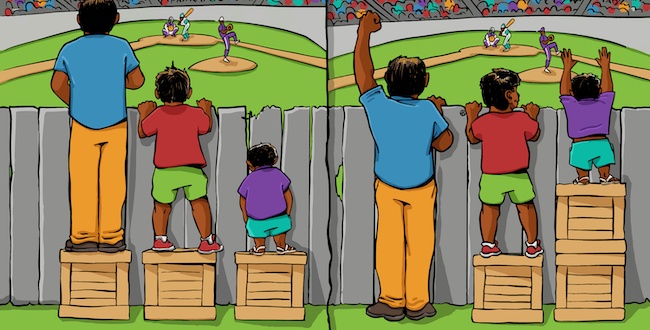 The Difference Between Equity and Equality—Why You Should Care

The Difference Between Equity and Equality—Why You Should Care

The terms equality and equity are used interchangeably in the media, whether a story covers prison reformation or gender-based violence. But equity is what governmental systems, non-profit organizations, and entire corporations should aim for.

Equality is an overused term in our current political climate. Bolstering everyone in an entity to gain the same opportunities is easier said than done. Should a company prioritize some marginalized groups over others? Both privilege and equity come into play when analyzing which groups need more support.

Equality can be defined as treating all people equally and allocating access to opportunities regardless of their identity. This is not necessarily a proportional representation of a situation. A popular analogy to differentiate these two concepts is the picture of three people on boxes at a baseball game. Why this picture may be problematic, however, is that justice is not shown. A change over time in such an illustration is not lucid in this analogy.

Justice being served to marginalized or underrepresented groups does not occur overnight. The fight for justice currently is constituted by hashtags, bail funds, legislation, frank conversations, and angry tweets. The boxes may be full of those actions from the past, but there are loopholes within justice. Entities (especially government officials) can pay off people to remain silent to preserve their image. Many corporations can provide vague terms of acceptance and assurance towards marginalized groups. If the box is beat up, it is difficult to stand on top of it.

But what does equity mean? Equity refers to proportional representation. In the picture above, the boxes on the right enable all of the people to watch the game. The economic and social opportunities given to white, cisgender people do not translate to those who may be a part of the LGBTQ+ community, those who are people of color, or those of lower economic status.

To achieve equity, policies and procedures may result in the unequal distribution of resources. This is the part in which the public can skew or undermine the efforts of an entity to achieve equity. A common example in university systems is need-based financial aid scholarships designated for low-income students. This is an equitable action from the university because it is necessary to provide access to higher education to all. Affirmative action is viewed as an equitable program to those who seek to allocate funds for said program. But those who do not prioritize programs like these may not think equity is the primary key to success in a system.

Taking equity seriously will save lives in the coming years. Allocating resources for underrepresented groups in the United States is a politicized topic. From a faith-based perspective, equity should not be a partisan issue. Equity is a universal value, one to be embraced by all faiths. Equality matters, yes, but embracing equity will serve a greater purpose in providing a legacy for those who come after us. Whatever higher being you may or may not believe in, equity juxtaposes social justice initiatives. To not hone in on the concept itself is to ignore the oppressed.